Continuing our ‘Expert Opinion’ series, we interview Professor Herbie Newell, to discover his vision of the future for cancer treatment.

Professor Newell is based at the Northern Institute for Cancer Research and has over 30 years’ experience of developing cancer drugs.

As with our previous interviews with Professor Peter Johnson, Dr Nicola McCarthy and Professor Nic Jones, the theme of stratified medicine – using genetic testing to improve treatment for people with cancer – comes through strongly. 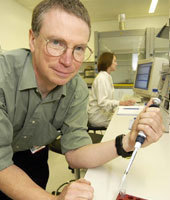 Professor Herbie Newell is optimistic about the future of cancer research

Cancer Research UK: For you, what were the hot topics in cancer research last year?

Herbie Newell: I think it’s a reflection of how exciting everything is at the moment that to do that question justice would take a huge amount of time – because there are so many hot topics.

My personal area of research is the discovery of new cancer medicines. And the hot topic there is the concept of ‘stratified medicine’, whereby you combine a targeted therapy with a ‘predictive biomarker’ to select the right patients to treat – and when you do that, you get extremely encouraging results.

Cancer Research UK: Could you explain a little more about what you mean by a biomarker?

Herbie Newell: A biomarker is very straightforward – it’s simply a test. All patients are very comfortable with the concept that when they become unwell that their doctor will refer them for various tests, and the results from those tests will dictate what kind of disease they’ve got, how bad it is, what would be the best treatment, and once you’ve received that treatment whether or not that treatment is working in you.

Historically, we’ve had a rather one-size-fits-all approach to cancer treatment. That is, if you have breast cancer, you get these particular three or four drugs, if you have lung cancer you get these two or three other drugs, etc. But moving forward – and this is where data has really started to come out in volume over the past couple of years – is the fact that the new targeted drugs that are designed to exploit the underlying molecular defects in cancer don’t work in every patient with a particular tumour type. They only work in a particular subset of patients who have these specific molecular defects associated with the target that the drug works on.

Cancer Research UK: What single piece of work or advance recently most excited you?

Herbie Newell: Well following on along that line, the results that came out on current drugs that are targeted to the ‘epidermal growth factor receptor’ (EGFR) [such as gefitinib and erlotinib]. This is one of the key growth factor receptors involved in stimulating cell growth and driving cancer cell division in some tumours. We now have a number of drugs – both antibodies that bind to the outside of the cancer cell and ‘small molecule’ drugs that get inside the cell and inhibit the enzyme activity of these receptors – that can stop cancer cells growing where EGFR is the important driver.

What has come out over the past couple of years is that if there are other defects ‘downstream’ of this growth factor receptor – and particularly faults in a relatively common gene called Ras – the drugs don’t work. This is because it’s a bit like the horse has bolted at that point – there’s no point shutting the stable door, as it’s already out of control. Whereas if the molecules downstream of EGFR are still intact and functioning normally, then the drugs can work quite well.

This work has actually already been introduced into routine clinical practice, so nowadays before you would get one of these drugs, you’d be tested for whether the pathway downstream of EGFR was faulty. And if it’s faulty, you won’t be given these drugs as they’re unlikely to work.

Herbie Newell: I think you’d probably have to identify the introduction of the human papillomavirus (HPV) vaccine as being the event that on a global scale is most likely to have a really significant impact. Not just in the UK, where to some extent we deal with cervical cancer via the screening programme, but it’s more important in the developing world where their healthcare systems just don’t allow screening programmes and where cervical cancer remains a really serious problem.

By introducing a vaccine before young women become sexually active you will have a very major impact on the incidence of the disease. In terms of overall mortality, I think that’s likely to be one of the more impressive results that we will see.

Cancer Research UK: What do you think the future years of cancer research will bring?

Herbie Newell: Most importantly it will bring more targeted therapies against a broader range of cancers. That will improve our ability to treat the disease. And there will be a better understanding of genetic predisposition, improved early diagnosis and improved stratification of patients. And all of these together will sustain and hopefully accelerate our ability to cure cancers.

Whenever I talk to the public, my opening slide is always a graph showing the number of cases of cancer and the number of people dying from cancer from 1970 up to the present day:

That illustrates very graphically, number one, that the incidence of cancer is going up – because of our ageing population and we are not dying from non-malignant disease. But most importantly, number two, despite this increased incidence, the number of people dying from cancer has been going down steadily since the early 1990s.

That tells me – and I think the public need to know – that our strapline that ‘Together we will beat cancer’ perhaps already looks a little bit out of date, because together we already are beating cancer. We just need more resource to continue to do this until we have this full set of tests and treatments for every stage of the cancer journey – from predisposition, through screening, through diagnosis, and through treatment. When we have that full set of biomarkers and targeted therapies, we’ll be able to offer every cancer patient, and every member of our society, real optimism that cancer will be curable.

The other thing to emphasise is that the revolution that took place in our understanding of this disease only took place in the 1990s, and exploitation of that knowledge is very much a feature of this millennium. So by definition, we haven’t had these new treatments for long enough for the benefits to feed into long term survival figures. That will come, but we aren’t there yet – so no complacency of course, but there’s plenty of optimism.

Cancer Research UK: What do you see as the greatest challenges still to be tackled in cancer?

Herbie Newell: I’m generally an optimist anyway, but I’m particularly optimistic about cancer research. Because for the first time now we have a joined up idea of how we are going to sort out the cancer problem.

The paradigm is that there will be a comprehensive genetic analysis at birth that will determine an individual’s predisposition to cancer. On the basis of that information, the time in a person’s life when screening is introduced and the lifestyle advice that they are given will be modified so that we focus those activities and resources on the most appropriate group of individuals so that we catch more cancers earlier.

So when cancers are detected they will be more curable, because we’ve detected them earlier – so surgery and targeted radiotherapy approaches will have a higher cure rate – and we’ll also have more targeted therapies to offer individuals. The net result of all of the above will be significant maintenance – if not acceleration – of the improvements in cure rates that we have seen.

Herbie Newell: There’s certainly an integration challenge. My personal view is that there are actually three challenges we face in delivering this new paradigm. The first is the academic career structure, because the majority of research that we support in the UK is in the higher education sector, and this requires a very joined up and multidisciplinary approach – it’s teamwork. But the traditional academic career structure does not effectively support and reward teamwork. It’s better at supporting and rewarding individual excellence. And therefore there’s a potential conflict there.

And the final challenge is that now that we have a paradigm for how we’re going to manage the cancer problem, the traditional approach to funding cancer research may no longer be optimal. So the traditional approach of ‘response mode’ funding (where you have an organisation that within the remits of its particular funding area will accept any application of funding and subject that to peer review and then fund what is deemed to be the best research) doesn’t address the need to systematically identify the holes in our paradigm and plug them with solutions.

Changing this requires the funding bodies to move not just to ‘commissioned research’, where you identify an area and then ask people to go away and do research, but actually to ‘managed research’ where there is a constant interface between the funders and the researchers to deliver on the agreed goals of a particular project.

Herbie Newell: I left school at the age of 16 and I went to work as a technician in a nearby lab, which happened to be a cancer research lab. I started working in chemistry, making small molecule cancer drugs. I then moved on into the pharmacology of cancer drugs whilst I was doing a part-time equivalent of A levels, and then a part-time degree.

What struck me from the outset was how you could take a person with cancer – a person with more than 20,000 genes that are making hundreds of thousands of different proteins in billions of cells – and you can treat them with a small molecule that cures them and gives them their life back. This is happening in increasing numbers now, but even at that time you could in some cases. I thought that was very close to magic.

This was 1971, so was right at the beginning of the era of cancer chemotherapy. The fact that this was possible immediately fascinated me and made me want to work out how this was happening, why you could cure some people but not others, and how you could make those drugs more effective and less toxic. This was something that I was more than happy to sign up to working on in the long term.