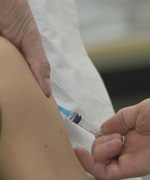 It's still early days for a new pancreatic cancer 'vaccine'

There have been several reports in the media over the last 24 hours about a trial of a new pancreatic cancer treatment.

The trial’s called TeloVac, and it’s testing a new cancer drug, called GV1001. Cancer Research UK is helping to support the trial, along with pharmaceutical companies Roche and KAEL-GenVax.

People affected by pancreatic cancer may be wondering how this affects them, and if or when the new drug will be available.

Unfortunately, these media stories aren’t driven by new data about the drug’s effectiveness – and we still need to wait for the trial to finish, and the data to be analysed, before we know if the drug will work. This will take at least a year, and even then there may need to be follow-up studies.

The drug being tested in the TeloVac trial, GV1001, works fundamentally differently from conventional chemotherapy. Rather than killing rapidly growing cells, it’s designed to switch on the body’s immune system and encourage it to kill the tumour – so-called ‘immunotherapy’. This is a concept that has been showing huge promise in recent years.

There are many different ways immunotherapy can work – in the case of GV1001, it works a little like a vaccine. The drug is made of fragments of a protein, called telomerase, which is known to be present in higher concentrations on the surface of certain types of cancer cell. The theory is that, when patients are injected with the drug, it ‘vaccinates’ them against their own cancer, and their immune system works in tandem with traditional chemotherapy drugs to attack the disease.

There’s a detailed Q&A about the trial, and the drug, over on our patient information website, CancerHelp UK – as well as a full summary of the trial including information about who can and can’t take part.

Although we’re sounding a note of caution over these reports, there’s good reason to believe that immunotherapy will play a big role in the future of cancer treatment. Indeed, there have been some significant developments over the last year.

These results really highlight the potential to switch the immune system back on to fight cancer, and give hope that future treatments will have much more long-lasting effects (unlike chemotherapy drugs, which can be quickly broken down by the body).

For many years, Cancer Research UK has been at the forefront of immunotherapy research: in the laboratory programmes we fund; the first-in-man trials we support; and the large randomised trials we conduct. You can read highlights of our work on immunotherapy on our website.

So although the media stories over the past 24 hours don’t change the immediate outlook for people affected by cancer, there is still a lot of reason to be positive about what’s in the pipeline over next few years.