Award-winning images: the birth of cells 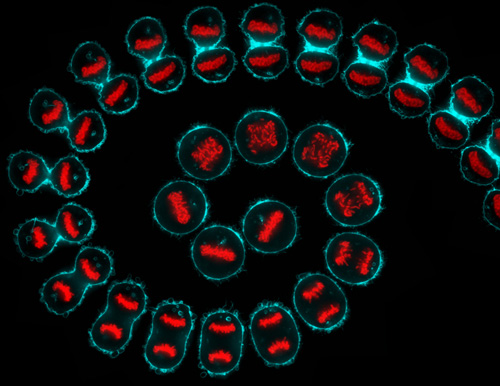 We were proud to hear today that Kuan-Chung Su – a graduate student at our London Research Institute (LRI) – has won a Wellcome Image Award for this striking spiral image of cancer cells dividing.

Congratulations are also due to Anne Weston from the Electron Microscopy Unit at the LRI, who has also produced not one, but two, of this year’s award-winning images.

But these aren’t just pretty pictures. They’re snapshots of hugely important biological processes that represent a crucial aspect of our work – that of laboratory research into basic cell biology.

Your cells divide millions of times a day – replacing old cells that have died and replenishing the organs that keep us alive. But in cancer this life-sustaining process of cell division goes catastrophically awry. Cancer cells evade the tight control mechanism that stop them growing and dividing beyond their pre-programmed limits, becoming rogue units that play by their own rules.

As well as being a process fundamental to life, cell division is also central in a disease that can ultimately kill. That’s why it is one of the major targets of cancer treatment.

Kuan-Chung’s image is a digital collage of time-lapse photographs of a live human cancer cell undergoing cell division. The whole image of around 27 stills is hugely magnified – its actual width is only about the thickness of a single sheet of paper, and the cell at the centre is only around one-50th of a millimetre.

Structures in the cell have been visualised using fluorescent proteins that light up under a special microscope. The outer edge of the cell (the cell membrane) is shown in light blue, and the DNA, packaged in chromosomes, in red.

The cell at the centre of the spiral has spent around 15 hours preparing for division, increasing in size and making a copy of its DNA (a process known as interphase). It’s also completed its journey through the vital first part of cell division by becoming round and aligning its chromosomes along the centre of the cell.

The transformation from this very first ‘readied’ cell in the middle to the physically separated daughter cells on the right hand side of the image took around 1 hour to happen.

The images were taken as part of a project led by Dr Mark Petronczki at the LRI. His team are investigating a process that takes only 15-20 minutes, but that could hold the key to understanding ways that cancer develops. Called ‘cytokinesis’ – from the Greek words cyto- (cell) and kinesis (division) – this is the final part of the journey from one cell to two.

The process is captured spectacularly in Kuan-Chung’s image – when a cell is dividing, it squeezes in the middle like a belt around a waist. This ‘waistline’ gets smaller and smaller until the belt is tight enough to split the cell into two identical new cells. It’s a finely choreographed process involving complex molecular machinery. The team at LRI recently revealed key information about how this process is controlled and, as well as this image, produced a spellbinding video of the process.

We were also very pleased to see that Anne Weston once again featured in the winners list. Anne is an electron microscopist at the LRI, and has clinched the award several times before for her beautiful and detailed images ranging from a blood clot on a plaster to a lung cancer cell. We’ve previously featured some of the Electron Microscopy Unit’s close-up images of cancer cells on the blog.

You can view Anne’s award-winning images for this year and all of the other winning entrants in the slide show at the bottom of this post.

The images produced by our researchers are stunning and thought provoking – almost works of art. But more importantly, they reveal a world hidden to the naked eye. By shedding light on this world – both literally and metaphorically – scientists can help us to understand the processes that sustain life, or those that take it away.

Such lab work is crucial if we’re to beat diseases like cancer.

You can view all of this year’s winning images in the below slide show. And for a closer look at each of the images, and more information about what they depict, visit the Wellcome Image Awards website.