A groundbreaking clinical trial for children with aggressive neuroblastoma 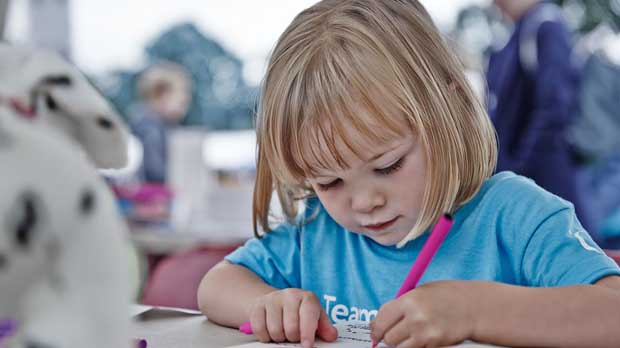 Neuroblastoma is a form of cancer that affects around 100 children every year in the UK –mostly those under the age of five – and grows from nerve cells left over from development in the womb. Normally these cells vanish once they have done their job, and the reasons why they persist and carry on dividing in rare instances to become a cancer remain a mystery; one that urgently needs to be solved.

The good news is that, thanks to improvements in treatment resulting from scientific research, more than six in every 10 children now survive neuroblastoma, compared to fewer than two in 10 back in the 1970s.

But these statistics hide a sobering reality. As with most forms of cancer, there are different types of the disease, some of which are particularly aggressive and harder to treat.

Despite intensive therapy, more than half the children with aggressive forms of the disease see their cancer return, called recurrent neuroblastoma. And for these children there are few treatment options left.

At present, doctors simply don’t know the best combinations of drugs to use to tackle neuroblastoma that’s come back, and researchers and clinicians are working to find better ways to improve things for these children.

And our new clinical trial, the BEACON–Neuroblastoma Trial, aims to do just that.

What is the BEACON-neuroblastoma trial? The trial is a ‘phase 2’ trial, run by the Cancer Research UK Clinical Trials Unit in Birmingham and led by children’s cancer expert Professor Andrew Pearson. It aims to define the ‘gold standard’ treatment for children with recurrent neuroblastoma.

The researchers have two main goals. The first is to discover the best combination of chemotherapy drugs to use as a core backbone of treatment, to which they can then add other targeted treatments. In particular, they want to know if adding a drug called irinotecan to temozolomide (the current treatment) makes it more effective as a standard chemotherapy.

The team’s second goal is to test a targeted treatment called bevacizumab (Avastin), which is designed to block the production of new blood vessels. Neuroblastoma cancer cells are highly dependent on the growth of new blood vessels to bring them the nutrients and oxygen they need as they grow, a process called angiogeneisis. And children who have the highest levels of blood vessel growth tend to have a poorer outlook.

Where is it running and who’s involved?

The trial is due to open at six centres across the UK, including The Royal Marsden NHS Foundation Trust and Leeds General Infirmary where it has already been launched. Children will be enrolling in the trial over the next two years, and they’ll be followed-up for a further five years.

But this trial has a much wider reach than the UK alone. BEACON-Neuroblastoma is a large, international effort and seven or eight countries from Europe are all participating too. 120 children from the UK and across Europe will be taking part.

As well as the doctors and nurses running the trial, there’s another important person who’s been involved with the study – a specialist statistician, who helped to design it. Getting the numbers right is a critical part of getting solid evidence out of a clinical trial. And it is especially important for rare cancers like neuroblastoma, where it’s hard to get meaningful numbers of patients. But by combining a smarter trial design and working alongside other countries to include more children, the BEACON-Neuroblastoma trial overcomes these barriers.

It’s not just a question of survival

We want to see all children survive neuroblastoma, but treatment can be gruelling – as poignantly laid out in this honest account of the legacy cancer treatment left behind for a young girl. So at the same time as trying to boost survival, we’re aiming to make treatments kinder too.

This is the very first clinical trial of a ‘targeted treatment’ for neuroblastoma. These drugs block specific molecular processes – in this case blood vessel growth – which the cancer depends on, destroying the tumour without harming healthy tissue. The researchers hope that adding targeted treatments to the mix could eventually mean needing to use lower doses of drugs overall, potentially treating neuroblastoma with fewer side effects.

But we’re not stopping there

This trial could set a new global gold standard of care for children with recurrent neuroblastoma. And it will also determine if a targeted treatment that prevents blood vessel growth into the tumours is an effective way to tackle this disease.

But there’s an important wider context here. This study also sets up the framework for future clinical trials into neuroblastoma, as all the infrastructure and expertise will be in place to investigate new treatments and combinations as they come through. It truly is a groundbreaking leap forward for this type of childhood cancer.

Thanks to your support, we’ve been able to set up clinical trials for children with all sorts of cancer across the UK. And the good news is we’re making real progress. But we know it’s still not good enough – any child losing their life to cancer is one child too many.

That’s why we’re committed to funding more research and clinical trials to find more cures and reach the day when 10 out of 10 children survive cancer. It’s only through research that we can achieve this goal, and you can help support our children’s cancer research here.

Update 06/15 NP: The BEACON-neuroblastoma trial is already being expanded to see whether a combination of the drugs topotecan (Hycamtin, Potactasol) and temozolomide (Temodal) might be just as effective but with fewer side effects compared to temozolomide alone. The trial will also recruit an additional 40 children with neuroblastoma to the trial, bringing the total to 160.

An awful feeling crosses our heart with the mention of word cancer. Emma, you rightly said it is not just a question of survival. Paradoxical feelings I have now after reading this blog. Glad to know about the improvements in treatment and sad to read that a return is seen more than half of the children!