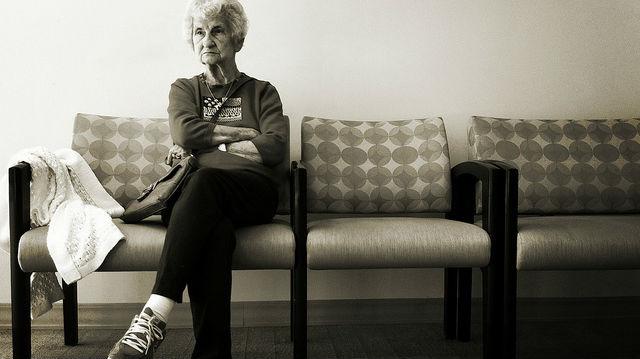 How do you feel when you have to wait longer than you expect to? Even when it’s something trivial, like when the plumber promises to fix your boiler today, but shows up a week later armed with apologies, it’s hugely frustrating.

But what if it’s something important? Waiting for a cancer test or to start treatment is always an anxious time. What if you knew that you should only be waiting, at most, a couple of months once you’d been referred by your GP – but you’d been waiting much longer?

Unfortunately, that’s the unacceptable reality for thousands of people in England*.

The NHS in England aims to treat at least 85 per cent of cancer patients within 62 days of being urgently referred by their GP for suspected cancer (see graphic). This target makes sure people are diagnosed quickly and get the treatments they need. People want confidence that suspected cancer is taken seriously and is a priority for the NHS. And while some might wonder why the target’s not 100 per cent, we think 85 per cent is reasonable. It won’t always be possible to treat everyone within 62 days. And besides, a patient could choose to delay their treatment for personal reasons, be unfit for treatment, or it could be inappropriate to treat them within the standard time.

So, given that the NHS has a 15 per cent ‘allowance’ based on the above reasons, the target shouldn’t be missed.

But it is being missed – consistently. And what’s more, our new analysis of NHS England data shows that some patients have to wait a shockingly long time for treatment. [This analysis is on England data only, because the data and measurement is split by the different countries. Scotland, Wales and Northern Ireland are also struggling to meet their waiting time standards, which you can read more about here]

It’s completely unacceptable that, for nearly two years, the 62-day target has been missed in successive quarters across England.

As the graphic below shows, the problem first emerged between January and March 2014, and since then things have got steadily worse: Today’s new figures show that between June and September 2015, 82.1 per cent of patients were treated within the target waiting time. And shockingly, nearly half of all NHS trusts failed to meet the target. All across England, thousands of patients are being failed.

This is extremely important. The earlier someone is diagnosed with cancer, and able to start their treatment sooner, the better their chance of survival. Not only that, the wait between being referred for cancer, being told you have cancer and first getting treatment is a very anxious time for patients – so the quicker this can happen the better.

If the NHS is failing to do this within 62 days for thousands of patients, then how long are they actually waiting?

How long are some cancer patients waiting?

Using NHS data, we’ve calculated the growing demand for treatment: Since data were first recorded in 2009, in England around 1,600 more cancer patients every year have needed treatment after being referred by their GP for urgent investigation of suspected cancer.

But the numbers of people who are treated within 62 days has only increased by around 1,200 extra per year – a shortfall of around 400 patients a year.

So how much longer are these patients waiting? We’ve looked at the data in more detail to get some answers – and we don’t like what we see.

NHS England publishes data on how many patients are waiting up to, and over, 62 days in time brackets. We’ve analysed how long people are waiting from referral to treatment, and how long patients wait once they miss the 62 day target.

Using the data for financial year 2014-15 – a full year where the NHS failed to meet the 62-day wait target – we’ve combined the figures into the following categories:

As the data below show, for all patients needing treatment after an urgent GP referral, twice as many (11.2 per cent) were treated long after the target, compared with ‘just after’ the target (5.3 per cent). We can look at this a different way. Of the 21,629 patients who waited more than 62 days in 2014-15, more than four in 10 (42.3 per cent) were waiting between two weeks and one month after the target, and around a quarter were waiting more than a month more than the target waiting time.

This means only a third of patients who wait longer than 62 days are treated just after the target. Most (67.8 per cent) patients waited anywhere from two weeks to more than a month longer.

This shows patients who are failed are more likely to be waiting a lot longer than they should be, rather than ‘just missing’ the target as you might suppose.

Some patients might be having an even worse experience. NHS England’s data groups everyone waiting more than 104 days in a single category. So we don’t even know beyond this how much longer these patients are waiting.

This is particularly a problem in some cancers and not others. And breaking these figures down by cancer type shows that only breast cancer and skin cancer patients met the 62 day target during financial year 2014-15. Patients with other cancer types – notably lung cancer, lower gastrointestinal cancers (such as bowel cancer) and urological cancers (such as bladder and prostate cancers) were failed.

This could reflect the differences in the types of tests a patient would need to confirm a diagnosis, and the complex treatments and choices a patient might make about their treatment.

We also know local variation exists, but more research is needed to fully understand why. (To see how your local area’s performance fares against other local areas and the national average, you can visit our Local Cancer Statistics website)

There are lots of possible reasons behind these frustrating delays. There are huge pressures on the NHS. We know that lots of people are waiting for cancer tests, like scans or endoscopies, who don’t yet have a cancer diagnosis, but have been referred by their GP. This is why we recently campaigned to ask the Government to invest to Test Cancer Sooner.

So what’s to be done?

How to tackle the decline?

England’s cancer survival lags behind comparable countries, and will likely get worse if standards such as this are not met. This situation can’t be allowed to continue. Urgent action must be taken to make sure the recommendations made in the new Cancer Strategy are adopted in the NHS. Early diagnosis and patients being able to get the treatments patients need are just two parts of this strategy.

September’s announcement from the Department of Health is a good start in tackling this: the government promised to up its investment in cancer tests by up to £300 million each year.

They also agreed to bring in a guaranteed 28-day turnaround between a patient being referred for a diagnostic test and receiving their test results. We’re keen to see how this will work in practice, as there are lots of things to consider, including how to collect data about when the person gets their test result. And changes will need to take into account the updated NICE referral guidelines, which aim to make it easier for GPs to refer people with suspected cancer.

We also want to hear exactly how the money for diagnostic tests will be spent. We hope to hear more when the Chancellor, George Osborne, sets out the spending review later this month. As today’s waitng time data show, the big improvements in cancer survival over recent decades are at serious risk of going into decline. We need urgent action today, to make sure we don’t fail the cancer patients of tomorrow.

*Northern Ireland and Wales have never met their 62 day wait target (95%) and Scotland has consistently not met its 62 day wait target (95%) for nearly three years. Cancer waiting times coding, definitions, and methods of measuring each wait and targets are different in each country in the UK – so comparisons should not be made between countries, only each country against their own measures (more about this here). We want to see action in NI, Scotland and Wales to improve their waiting times as well, so that all patients have the best possible outcomes.

The problem could be admin related. My experience is that any letters (NHS don’t and won’t do email which is ridiculous) that need sending following a consultation can take up to two months to reach their destination and are often way out of date as a result. I was recently pulled off a trial involving an immunotherapy drug but continued with the chemo bit. I asked if, as a result, I could have the chemo close to home rather than having to travel to where the trail was being managed. The answer was yes. But it took so long to refer me, because of admin delays, I finished my cycles at the original hospital before the transfer was even close to being completed. In fact it never happened. NHS reluctance to use email to communicate across NHS boundaries and with patients and GPs is a major, major source of inefficiency and unnecessary expense and probably the major cause of the delays you are talking about. They live in the dark ages. Their excuse is always that they are worried about data security. Banks and Building Societies don’t have a problem. Why should the NHS?

Bowel cancer (aka colorectal cancer) is Lower GI not Upper GI. An example of Upper GI cancer would be gastric or oesophageal.

Whoops! Thanks for pointing that out – now fixed.

i am consistently impressed by the quality of these posts from CRUK, including the accessible graphics. some might object to the y-axis in the second, but i would urge those people to think more of the pink bars as ‘people missed’, and forgive a construction that may reveal bias because the deficit isn’t trivial.
in this article, though, i worry that the take-away message for many readers might be that ‘the NHS is failing patients’, and i wonder whether the causes might be more usefully explored. might it be (as is hinted at) that a ham-strung NHS is failing patients because it is not being allowed to succeed? if this is true (and introducing politics is guaranteed to cause arguments, i know), then a more constructive take-away would not be to look at how the NHS could be given the necessary resources to perform better? how can we help?