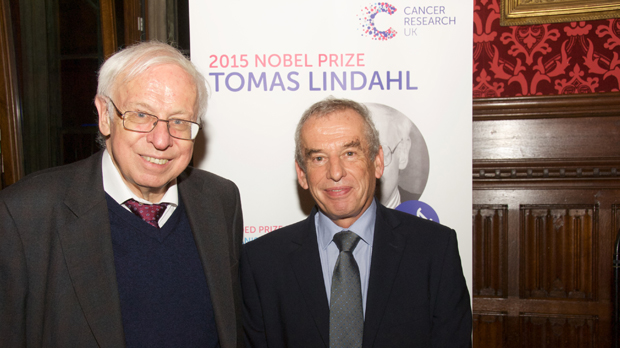 Tomas Lindahl and Professor Nic Jones at the event in Westminster this week to congratulate Tomas and urge the Government to protect the science budget.

Ahead of the Spending Review this week Cancer Research UK is urging the Government to protect the science budget across Government departments or risk losing improvements in cancer prevention, early diagnosis and survival seen over recent years.

“We’re thrilled that Tomas’s work has been recognised with a Nobel Prize, and extremely proud that that we’ve been able to support him and his research over the last 30 years. Without research funders like Cancer Research UK and the Government’s continued support for research in the UK, we wouldn’t have such a fantastic research environment.” – Prof Nic Jones, Cancer Research UK

At an event in the Houses of Parliament to congratulate Dr Tomas Lindahl on being awarded the 2015 Nobel Prize for Chemistry and celebrate Cancer Research UK’s three decades support of his work, the charity renewed its call for the Government to safeguard the UK’s impressive world ranking for the quality of its scientific research.

Research has driven improvements in cancer services in the UK over the last 40 years. It has led to new drug treatments, a better understanding of lifestyle factors that can prevent cancer, new ways of delivering radiotherapy and new surgical techniques.

In the 1970s, fewer than a quarter of people with cancer survived. But over the last 40 years, survival has doubled – and today half will survive. Cancer Research UK’s ambition is to accelerate progress and see three-quarters of people surviving the disease within the next 20 years.

As well as improvements to people’s health, Government’s investment in research underpins the development and retention of a highly skilled workforce and drives economic growth.

The UK’s scientific reputation has been instrumental in the creation of the new Francis Crick Institute – a joint venture involving charities, universities and Government-funded teams. It will host 1,200 of the world’s best scientists, who will work together to tackle cancer and other diseases, improving the lives of patients across the world.

Last month, Dr Tomas Lindahl won a Nobel prize for his pioneering work revealing the process of DNA repair – something that plays a fundamental role in the development of cancer. His work highlights how vital investment in science and research really is. It has led to a deeper understanding of why the disease develops and, crucially for patients, treatments that target cancer’s weak spots in DNA repair.

Professor Nic Jones, Cancer Research UK’s chief scientist, said: “We’re thrilled that Tomas’s work has been recognised with a Nobel Prize, and extremely proud that that we’ve been able to support him and his research over the last 30 years. Without research funders like Cancer Research UK and the Government’s continued support for research in the UK, we wouldn’t have such a fantastic research environment. And without researchers like Tomas, we would not be making the progress in cancer that we are. Ahead of the Spending Review next week we are calling on the Government to protect the science budget across Government departments.”

Professor Jones added: “The UK’s impressive world ranking for the quality of its scientific research is important to maintain and the Government needs to protect our global reputation. The more the UK is known for its research, the more investment and talent it will attract, supporting further success. Although Cancer Research UK doesn’t receive any Government funding for our research, we depend on its investment in UK science to create a supportive environment for our research, so that ultimately, we can deliver benefits for patients. It’s vital the Government maintains long term public funding for science.”

Dr Lindahl was the first director of Cancer Research UK-funded labs at Clare Hall in London, when it opened in 1986. Under his leadership, it became, and remains a world-leading centre for studying how cells repair their DNA. Clare Hall became part of the Francis Crick Institute in April 2015.

Dr Lindahl said: “I moved to the UK in 1984 after Cancer Research UK asked me to help set up and run a new laboratory at Clare Hall. It was exciting to move to a new country and have the chance to expand on my earlier research, building up knowledge of what goes wrong with our cells. Other institutes in other countries had offered me attractive jobs but I chose to come to the UK because I was excited by working in a supportive environment that allowed me to collaborate with similar researchers. The support and investment of Cancer Research UK, other research funders and the Government allowed me the space to try to answer fundamental questions about biology. These were questions we weren’t sure we could answer, but over time we’ve been able to. The UK should be proud of how it values research, and it has shown the benefits from that long-term investment.”