In the summer of 2015, we launched a new funding scheme called the Pioneer Award, to support innovative science. We’re encouraging researchers to think big – the sky is the limit – and bring with them new ideas that could be game-changing for cancer research.

To quickly recap on how this new scheme works, it’s a ‘Dragon’s Den’-like way of funding research: applications are judged anonymously, and short-listed researchers are given five minutes to pitch their ideas to a panel of experts. There’s a pot of up to £200,000 to those who succeed.

Back in December, we unveiled the first round of successful projects, and now we have the next batch of bright ideas. 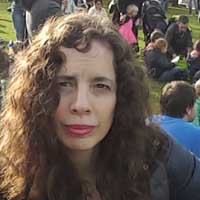 Many molecules known to play an important role in cancer (such as MYC and the RAS family) have been difficult to target with drugs for two reasons. First, they are only found inside the cancer cells, so the first challenge is getting a drug into the cell in the first place. And second, the different ways they interact with other molecules inside cells means they aren’t susceptible to more traditional types of drugs.

So, instead of designing drugs that block how these molecules work, Dr Laura Itzhaki, from the University of Cambridge, is proposing a different approach: sending them for destruction instead. One end of the drug is designed to stick to a cancer-driving protein and the other end attracts a miniature franking machine that stamps the protein with an address, sending it straight to the cell’s rubbish tip to be dismantled.

Most drugs work by targeting one specific molecule in cells. But this building block approach means they can be made to order and target a large number of cancer-causing molecules, as well as having add-ons that help them seek and get inside cancer cells with ease. It could lead to a whole new way of designing potential cancer-fighting drugs.

Project 2: To operate or not, could artificial intelligence give us the answers? There’s no doubt that surgery is one of our most powerful weapons against cancer, curing many patients if their disease is diagnosed before it has spread. But not everyone benefits from surgery, and it can be difficult for surgeons to predict this ahead of an operation.

To help doctors decide whether to operate or not, Professor Richard Edmondson, at the University of Manchester, is turning to big data. He’s developing a computer program that can analyse NHS cancer patient data, including information about the biology of a patient’s disease, the age and health of patients and access to specialist surgeons.

His goal is to improve the decision making around surgery, to reduce patients having unnecessary operations and make sure those who do have surgery have the best possible treatment. Do you remember having toys as a nipper, where the aim of the game was to shake it so the right shapes would fall through the right holes? Using this kind of idea, Professor Vesselin Paunov, from the University of Hull, has come up with an ingenious idea for tackling acute myeloid leukaemia (AML).

The myeloid cancer cells are generally larger and more irregularly shaped compared to healthy white blood cells, and it’s these properties that Paunov’s team is looking to exploit.

First, they use lab-grown cancer cells to imprint a layer of specialised plastic, creating a mould in the shape of the cells. Then, using highly specialised equipment, they can reproduce this cell-shaped pattern onto a large area of thin plastic.

Next, using something similar to a blood dialysis machine, a blood sample from a patient is passed over the AML-patterned plastic, where the team think that the cancer cells will get stuck in the imprinted holes. The team hopes that they can then remove these trapped cancer cells before the blood returns to the body. Combining this ground-breaking approach with chemotherapy could improve the outlook for patients with this type of disease. As tumours grow, they often become short of oxygen in certain regions, forcing cancer cells to adapt to these harsh conditions. But these adaptations also make cancer cells hardier and better at resisting treatments. So researchers now believe that re-oxygenating them could help make treatments more potent.

But how do you get this oxygen back into the tumour? One promising way is using tiny bubbles, or nanobubbles. Injecting these pockets of air directly into the tumour’s blood supply has shown promise in mice, but there are problems with scaling up this approach to work in people.

Professor Eleanor Stride, and her team at the University of Oxford, has taken inspiration from fizzy drinks. They are developing a drink containing nanobubbles of oxygen (much smaller than the carbon dioxide bubbles in your standard fizzy pop), and are studying how the oxygen bubbles get from the stomach to the pancreas in mice with pancreatic tumours, and how much gets there.

Their next steps will be working out the best doses to use, and if giving mice oxygen nanobubbles boosts the effectiveness of treatments like chemotherapy and radiotherapy. Pancreatic cancer is difficult to treat, so this research could be the first step towards improving the outlook for patients. Research in animals has shown that very thin radiotherapy beams (about the same width as a strand or two of human hair) are just as effective as normal radiotherapy at destroying tumours, but healthy tissue can heal the damage they cause more easily.

It looks very promising, but more research into the technique is needed before testing it in patients. But this crucial research is being held back because only a few specialised, and expensive, machines can produce these skinny micro-beams.

This is the problem Dr Stefan Bartzsch, from The Institute of Cancer Research in London, is hoping to solve by making equipment that’s smaller and cheaper to run. Bartzsch is adapting and redesigning conventional X ray imaging machines to produce micro-beams. This will allow scientists to study the new technique in more detail, to find out if it’s safe and effective enough to test in patients.

These ideas may sound slightly mindboggling, but that’s exactly the point of the award. We want to fund new innovative ideas that haven’t been tried before – yes, the risks are high, but so are the potential rewards. And if we’re to boost the number of people surviving cancer to three in four, we need scientists to think big.