Alcohol and breast cancer – how big is the risk? ‘Half a glass of wine a day increases breast cancer‘ was just one of the headlines this week, which discussed a report that reinforced the evidence that alcohol can increase a woman’s risk of developing breast cancer.

The report from the World Cancer Research Fund outlined the latest evidence on how we can reduce that risk – focusing on weight, physical activity and drinking.

The WCRF studies all the evidence on a potential risk and decides whether it’s strong enough to be a basis for making recommendations to the public.

Breast cancer is the most common cancer in the UK, and 1 in 8 women will be diagnosed with breast cancer at some point in their lives. And since we know that almost a third of breast cancer cases in the UK could be prevented, largely by changes to lifestyle, this is important stuff.

While the cause of an individual’s cancer can never be certain, there are still things you can do to reduce your risk. And evidence like this is the first step to helping women to do just that.

So what exactly does the report say?

The report backs up previous research showing that drinking alcohol can cause 7 types of cancer including breast cancer. Even though it’s in the headlines, this is nothing new.

While the reports may sound alarming, we also know that the more you cut down, the more you’re reducing your risk. 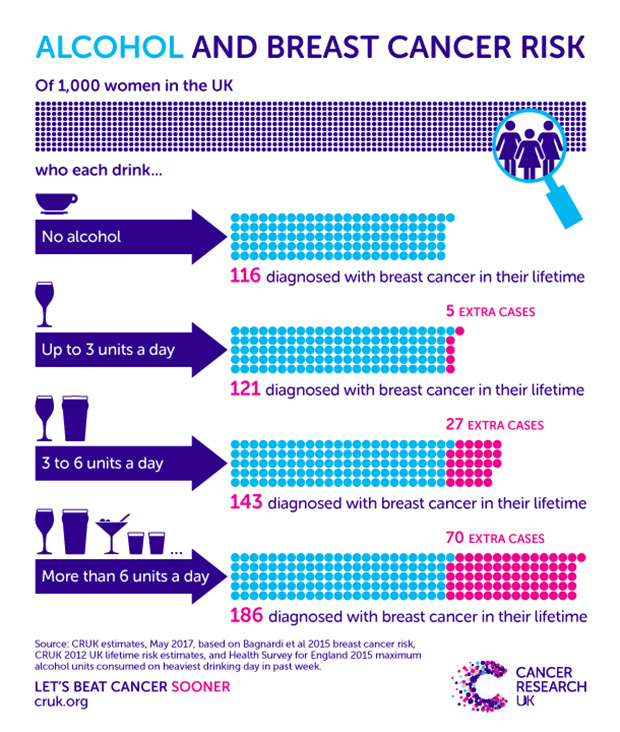 Although most women don’t regularly drink very large amounts of alcohol, thousands of cases of cancer – including breast – are linked to alcohol each year.

There are 3 good theories on the link between alcohol and cancer which we’ve written about before. But overall there is strong evidence that keeping a healthy weight and being physically active, can help prevent breast cancer.

Unlike its previous report, this time WCRF says that some forms of physical activity probably reduce the risk for pre-menopausal breast cancer But the finding is only true for ‘vigorous’ activity – exercise which gets you breathing hard and your heart beating fast, so that you won’t be able to say more than a few words without pausing for breath.

The report also adds to the existing evidence that physical activity at any age is related to a lower risk of breast cancer in women after the menopause. This can be anything that gets you a bit hot and out of breath – from fast walking, to cycling, or even heavy housework. And the more you do the better.

The evidence on weight and breast cancer is also complicated: as your risk changes depending on the ages at which you were overweight.

But overall the report agrees with previous work showing that being overweight or obese throughout adulthood causes postmenopausal breast cancer, something that is already well established.

Bringing it all together

Other things that affect a woman’s breast cancer risk are less easy to control. As with most cancers, the risk of developing the disease increases with age. Having a family history of the disease can increase a woman’s risk, and breastfeeding can reduce it.

All the different things that can increase the risk of breast cancer are held together by a common thread: they all affect the hormones circulating around in the body in some way.

Hormones help control what happens inside our bodies by sending messages from one place to another – including instructing cells when to stop and start multiplying.

If this system goes wrong, cells can get too many messages telling them to make more cells. And that can lead to cancer.

Overall the best advice is the same as at the start of the week: to keep active, keep a healthy weight throughout life, and limit alcohol.

I am a Vegetarian,non smoker, was overweight, by two stone at least but that is coming down hopefully now! I was tee total for ten years and then started drinking the equivalent of a few glasses a week almost two years ago,was diagnosed with breast cancer five months ago, no one tells you or can tell you for sure what caused it, but you’re left to make your own conclusions.

I think much much more research needs to be done! As it seems to me that cancer doesn’t care who it chooses! Those who are underweight, don’t smoke, don’t drink and breast feed still get cancer! I was slightly overweight after my second child and did drink occasionally, but breast fed both children and was very active but still got breast cancer.

I am 70 and have just got through all my treatment for breast cancer. I am slim, attended the gym for pilates until diagnosed. I always eat healthily and have an occasional glass of wine and of course I did breast feed.

Keep a healthy weight throughout life. If only people were more aware of this fact! I still think we need to teach both men and women how to cook in school so they can cook ‘real’ meals in adult life. So many people have no idea how to cook a cheap and healthy meal.

I have never smoked, I have never been overweight 7.5 stone at 18, 7.5 stone at 38 and yes heavier in between and after 50 but never overweight, I have eaten a healthy diet my cholesterol level has always been low and still is. Exercise, I have always been active from my school days, I did aerobics then I started spinning at 35, I swim, walk, garden, do conservation work, cross country ski- shall I go on. And drink- well I’m not tea total but I have never drunk heavily- just socially maybe 3 units a week, my sister on the other hand has never taken exercise has always been overweight and drinks more in a day than I drink in a fortnight and yes it is me that developed post menopausal breast cancer. How does that make me feel when I keep reading that I should improve my lifestyle.

I am still being treated for breast cancer. I don’t drink alcohol, I have never smoked and I live a pretty healthy lifestyle. I did take the pill for many years but was told that it had not caused my cancer. I am unlikely to know what did and while I agree that a healthy lifestyle can help prevent cancer, i don’t think cancer is fussy about who it chooses. And much more research is still required.

Could it also be that women who drink more alcohol maybe don’t eat a healthy diet or get enough exercise? Both of which of course lead to weight gain. But then I had a dear friend who battled with her weight all her life. She ate a healthy diet but drank around 10 units of alcohol most nights and had breast cancer before she was 50.

I had breast cancer age 47, my mother died of it age 67 but I was always told it was not hereditary. I have always been slim, very active, drank minimal alcohol, breast fed for 15 months and 9 months, had my children in my 20’s, ate a healthy diet, never smoked, only took the pill for about 4 years and was a vegetarian for about 2 years. I think we are still very far from understanding why someone like me should develop this disease!