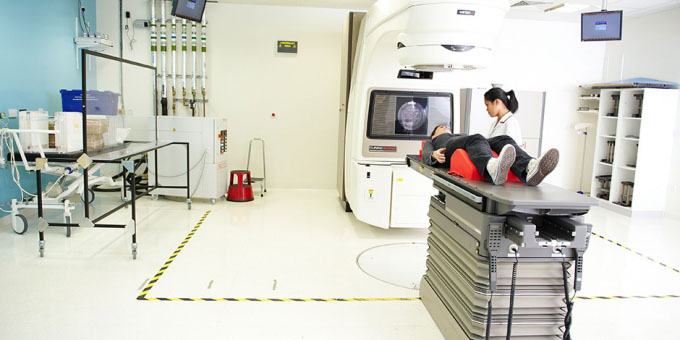 Dr Ross Carruthers has recently been awarded a CRUK Clinican Scientist Fellowship. A consultant radiation oncologist, now based at the University of Glasgow, he plans to investigate DNA damage response mechanisms in glioblastoma, to better understand why these cancers are particularly resistant to radiotherapy.

People thought they were going to make radiotherapy obsolete so there’s been a huge gap in research and funding over the last 10–20 years. But radiotherapy is the second most effective modality in curing cancer next to surgery, and technical advances mean our ability to give high doses to tumours whilst sparing normal tissue is much better than in the past. Now we need to focus on the other side – work on our understanding of radiation biology to increase the therapeutic potential of radiation. Technical advances in delivering radiotherapy have provided huge benefits to patients, but the actual ability to manipulate the response of the tumour cells to radiation by targeting DNA repair is in its infancy, but has the potential to open up an entirely new frontier in cancer therapy.

The ability to target the biological response of tumour cells to DNA damaging agents such as radiotherapy has only really become possible in the last decade or so, however the lack of funding and interest in radiation biology has meant that primarily these agents have been combined with chemotherapy rather than radiation. Radiotherapy trials are challenging to perform, and the addition of treatments which have the potential to increase side effects and perhaps jeopardise a patient’s ability to complete a course of radiation have to be planned particularly carefully. With proper funding, expertise and enthusiasm from patients, clinicians and the pharmaceutical community, I’m confident this will change in the near future and bring real improvements in our ability to treat these challenging tumour sites.

What do you hope to do during your fellowship?

Glioblastomas are incredibly radiation resistant, and my research will be to work out why this is and to develop ways in which we can sensitise these tumours to radiation without causing increased side effects from radiation. Eventually, my main aim is to translate my laboratory research into the clinic, developing new treatments for glioblastoma, in collaboration with Professor Anthony Chalmers laboratory in Glasgow.