‘Nothing to lose and everything to gain’ – Alfred’s story Alfred Samuels, 59, lives in London with his partner Grace and has five children. In 2012, when he was diagnosed with advanced prostate cancer that had spread, he joined our STAMPEDE clinical trial.

This is Alfred’s story, and it’s just one of the many personal reflections on cancer featured in our Annual Review this year, highlighting the work we do and why it’s important.

A choice to make

When I was told I had prostate cancer, my first thought was to ask: ‘how long?’ Being told to think short term rather than long term completely deflated me, but it was even more difficult breaking the news to my wife and children.

To hear about the STAMPEDE clinical trial gave me hope. It’s a trial looking at new combinations of treatment for prostate cancer patients to see which can improve survival. 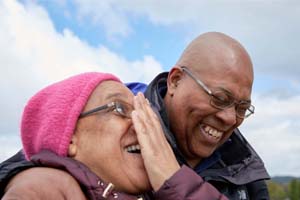 Alfred and his partner Grace.

When I found out I was eligible, I thought: ‘There’s something I can do’. Not just for myself, but for others too.

It’s an incredibly personal decision to join a trial, and there’s a lot to think about. It can mean more trips to hospital, which can take up time and money. I didn’t mind the extra trips and I was glad that I was being monitored closely. But other people on the trial found these things made them think about their cancer a lot more.

In my case, where I’d been told to think short term, I thought that at least taking part in the trial meant I’d be really well monitored.

‘Nothing to lose and everything to gain’

I was lucky to have my partner, Grace, with me. She used to be a nurse and her father also had prostate cancer so she was able to walk hand in hand with me through the decision to start the trial. In the end it was a no brainer. I felt I had nothing to lose and everything to gain.

For my part of the trial, I have to take 4 tablets of abiraterone (Zytiga) a day and have an injection every 8 weeks. This is to reduce the testosterone in my body, as it makes the cancer cells grow faster.

I’d like to say a huge thank you to people who support Cancer Research UK, from the bottom of my heart.

– Alfred Samuels, who took part in the STAMPEDE clinical trial

The biggest down side was the side effects, from hot flushes and mood swings to weakness in my legs. I went from a striding, bounding person to someone who couldn’t walk very far at all.

But I’m the type of person who will never give up on what I attempt to do. I did everything I could to stop the weakness, trying to strengthen my muscles with hill walking. I said to myself: ‘Alfred, you’ve got to get a grip on this disease.’ And it really helped getting back into exercise.

‘I see the world differently now’

Now I’m here 5 years later, and I would never have thought that possible. I really thought the curtains had closed on me. So far, the treatment has been working and my cancer is being managed well. While I’ll be on the treatment for the foreseeable future, it’s given me the chance to live life. I see the world differently now and I take stock of what I’m seeing. I’m also spending more time with my family rather than flying here, there and everywhere for work.

I’d like to say a huge thank you to people who support Cancer Research UK, from the bottom of my heart. Continue supporting the cause that is going to save so many human beings; some of them could be your family. For me, going on a trial worked. I know it doesn’t work for everyone but I couldn’t let the statistics rule my life.

I don’t think I’d be here today if it wasn’t for the trial, abiraterone and Cancer Research UK scientists who helped develop the drug.

I like Cancer Research UK’s approach and I see the value of what they’re doing. It’s real. It’s keeping in with the people who are affected, and those of us who are going through it.

Alfred took part in our STAMPEDE clinical trial, which is many different prostate cancer trials in one, testing new combinations of drugs to see which may improve survival. Some of the results from STAMPEDE were presented at the American Society of Clinical Oncology (ASCO) Annual Meeting 2017, one of the largest events in the cancer research community’s calendar. Other parts of the trial are still open for patients to join.

Congratulations, Alfred and well done on sharing your story. It’s great to hear of someone beating the odds and will help others in the fight. Keep on keeping on.

Very well written and most encouraging. I wish everyone well who takes on a drug trial . Thank you for sharing x

good luck Alfred, you are a true inspiration
God Bless

So nice Alfred to here you on road to recovery,. May you go from strength to strength..we all family together

Thank you Alfred for sharing such a personal story. GOOD LUCK AND GOD BLESS YOU. Yu are an inspiration to all of us coping with the challenges of cancer. We know from our cancer experiences must have also been a struggle at times and we wish you continued strength to cope. Thanks also to all at Cancer Research UK and everywhere involved in this cancer battle on behalf of humanity at large. Keep up the good work…we hope and pray!

God bless you Alfred.
A massive thank you to all at Cancer research. Continue with the great work that you’re all doing.

My fiancé has stage 4 Terminal Prostate Cancer and has just undergone 6 cycles of Chemotherapy, which has shrunk the Prostate and is on the hormone injection every 4 weeks. My fiancé is so determined to fight this and listening and reading Alfred’s story has given him even more determination. Keep strong Alfred