‘Universal fingerprint’ in cancer DNA points to potential blood test. But it’s not ready for patients 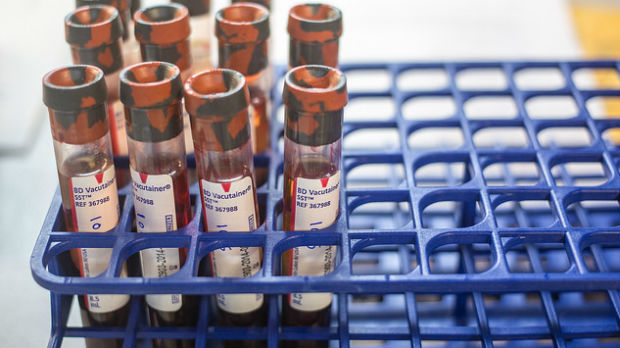 A ‘universal cancer test’ is big news today, with headlines claiming that the test will be able to detect any cancer in just 10 minutes.

While the science behind the headlines is exciting, the reality is the test is a long way from being used to diagnose cancer.

Professor Paul Pharoah, from the University of Cambridge, urges caution, saying it’s unknown if the innovative idea will be useful in a clinical setting, as some news reports suggested.

That’s because using a blood test to confirm that people with advanced cancer have cancer is very different to using that same test to detect the earliest hints of cancer in otherwise healthy people.

Researchers at the University of Queensland in Australia developed a new way to pick up differences between the DNA of cancer cells and healthy cells.

These differences stem from tiny molecules called methyl groups, which are naturally added to DNA inside cells. These molecules are usually spread evenly across the DNA in cells, but in cancer cells they tend to form clusters at different points.

It turns out that in a chemical solution, the tightly clustered methyl groups fold the DNA into a unique shape, which can stick to solid surfaces like gold. This ‘universal fingerprint’ changes the properties of the solution, which can be measured in the lab.

Researchers used this to develop a lab-based test that could identify DNA from cancer cells that’s circulating in the blood. And they’ve published their fascinating findings in the journal Nature Communications.

The Australian team tested blood samples from 100 patients with breast and bowel cancers that had already spread to other tissues. The results were then compared to 45 samples taken from people without cancer.

A key point to remember is that the study almost exclusively used samples taken from patients whose cancer had already spread. Patients with these advanced cancers often have more cancer DNA circulating in their blood, which would make it easier to pick up.

“When developing a test like this, researchers will almost always start with samples from patients whose cancer has spread. Because if the test can’t pick up metastatic cancer then it’s not going to work for early stage disease,” says Pharoah. “It’s the first step in the process.”

In initial experiments using blood samples, the scientists correctly distinguished between healthy and cancer samples 73% of the time using one test and 83% of the time with another.

“How accurate a test looks varies massively depending on what samples are being used and how the experiment is run,” says Pharoah. “Which is why it’s too soon to get excited, we need to wait for results on more clinically relevant samples of early stage cancer.”

How do you assess a cancer test?

The test that made headlines today wasn’t sensitive enough to detect very low levels of DNA that had the “cancer signature” artificially added. The researchers noted in the paper that with the current method used: “We may not be able to detect cancer on a very early stage.”

To understand if the test could help diagnose cancer, the next step is to use it on more relevant samples.

Pharoah says this could involve collecting samples from a large group of people with non-specific symptoms that may be cancer. Once they had gone through routine diagnostic tests, researchers could then use the new technique to see how well it picked up the cancers that were diagnosed. But studies like this need to be done on a large scale and take a long time to get solid results.

Dr Ankur Chakravarthy, one of the researchers involved in the study agreed, telling Forbes that it’s too soon to know how clinically useful the test might be. “Just how useful this test will be for routine clinical use will depend on extensive testing in the general population to see how often it gets things wrong.”

It’s always exciting to see new methods being developed that could one day be used to help diagnose cancer. But the reality is there’s a long way to go before we’ll know if this method will be accurate enough to be useful in the clinic.

“Often these tests get overhyped very early on in their development, which can be extremely unhelpful,” says Pharoah. “It’s a long road from discovering a new technology to actually having something that could benefit patients, and this test is right at the start of that journey.”

Fantastic to hear as any potential breakthrough for this terrible disease is a great step forward. So many suffer so any small step is a blessing.