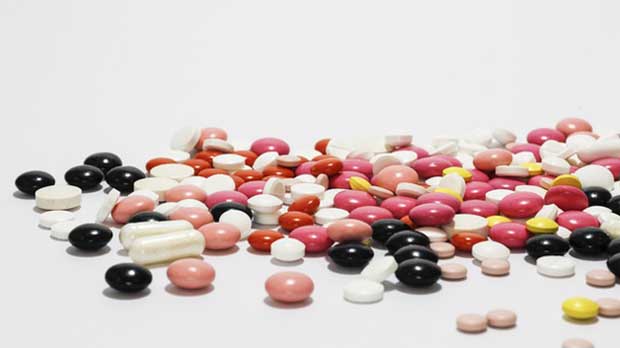 This week, the National Institute for Health and Care Excellence (NICE) finished its review of a thyroid cancer drug called vandetanib (Caprelsa). This is business as usual for NICE, which decides whether the NHS should pay for new cancer medicines in England. NICE has completed 36 of these reviews for cancer drugs (or combinations of cancer drugs) this year alone.

In this case, NICE didn’t recommend the NHS pay for the drug, saying that it doesn’t offer value for money. While other treatment options are available, this decision will be disappointing for the small number of thyroid cancer patients who will be directly affected.

But there’s an added significance to this decision. Vandetanib was the last on a list of 33 treatment options that NICE has been working its way through since 2016, when a pot of money put aside to pay for treatments not routinely approved – called the Cancer Drugs Fund (CDF) – was redesigned. So, this decision marks the end of an important shift in the way drugs are reviewed and approved in England.

The Fund was introduced in 2011 by the then coalition government. And until 2016, it was used to pay for drugs that NICE had rejected or hadn’t reviewed, because there wasn’t strong evidence that they were effective enough to justify their cost. This meant many patients could be prescribed drugs that wouldn’t otherwise have been available, which was good news.

But the Fund was also heavily criticised, including by us. There was no data collected on how well patients were doing on drugs paid for by the Fund, meaning it couldn’t help NICE make better decisions in future. And its costs also spiralled, with a massively overspent budget that ultimately led to the Fund being criticised for not delivering “meaningful value to patients or society”.

That’s changed now. The Fund was redesigned in 2016 to provide a more sustainable way to pay for promising new drugs and, crucially, to collect data on how effective those drugs are for the patients who are prescribed them.

This was a fundamental shift for NICE, which could previously only make either a ‘yes’ or ‘no’ decision for routine NHS funding. It now has the option for a ‘maybe’.

If NICE sees a drug as promising, but there’s not enough evidence on the drug’s benefits and value for money to recommend the NHS routinely pay for it, NICE can now approve the drug for a limited time (often around 2 years) and have it paid for via the CDF while more evidence is gathered.

NICE then makes a final decision once that time is up, often using evidence of any benefit the drug has provided to NHS patients to help inform that decision.

This is called ‘managed access’. And NHS patients are already seeing the benefits. More than 7,500 patients in the past 2 years have received promising managed access treatments that need more time to collect data through the new CDF.

In addition, two drugs which were initially temporarily approved through the new Fund – brentuximab vedotin (Adcetris) for Hodgkin lymphoma and pembrolizumab (Keytruda) for non small cell lung cancer – have since been approved for routine NHS funding. This clearly demonstrates the value of this model: without the option of managed access, the manufacturers would either have had to delay submitting the drugs to NICE for review while the evidence built over time or risk NICE rejecting the drug altogether.

Professor Peter Clark, the Fund’s clinical lead, sees this route as vital in allowing more NHS patients to get new drugs faster. He says that previously, drugs with “clearly defined early promise” but which don’t have the outcomes data NICE needs to confidently assess value for money, “would have got a no”. But now, the “popularity of the CDF demonstrates the value of this option to NICE and the companies”, he adds.

As part of the 2016 redesign, NICE also agreed to review all 33 treatments options that were previously being paid for by the old Fund and had been licensed by the European Medicines Agency (meaning the drugs are officially certified as safe and effective to treat a specific cancer type). The reviews offered a shot at regular NHS funding for these drugs and a second chance for those NICE had previously rejected.

NICE has now finished that process and has approved almost all of them, which Clark describes as “staggering” and a “fantastic outcome”. 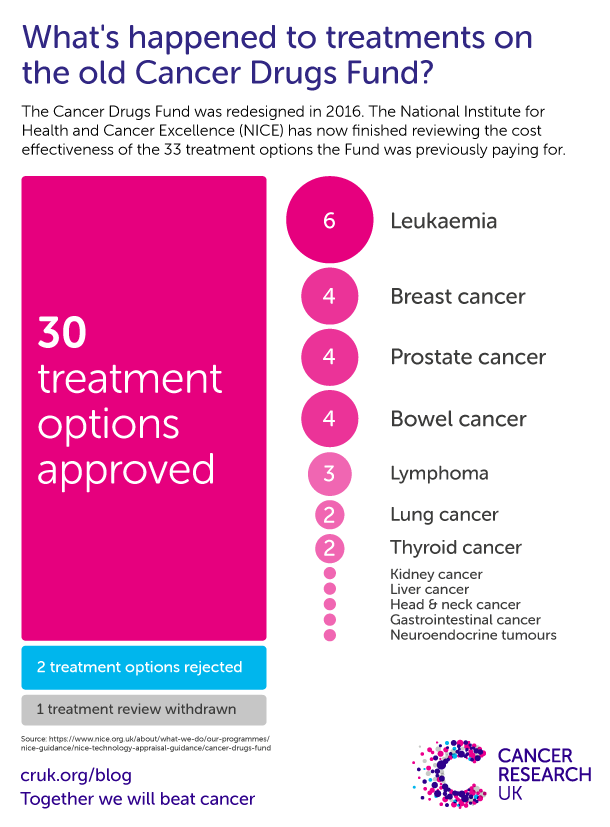 This gives people who need these drugs certainty that they will be available in future. But it also frees up more of the new Fund’s budget to pay for exciting new treatments, like CAR T cell therapy and other immunotherapies.

Clark puts this success down to a combined effort from NHS England, NICE and the drugs’ manufacturers. He says NICE has developed “a better understanding of cancer and of chemotherapy” because of the changes to the Fund. And, crucially, he says patients have benefited as a result.

For the manufacturers’ part, Clark believes “the pricing philosophy of pharmaceutical companies has changed”. He says manufacturers recognise that routine NHS approval is the only way to secure long-term funding for a treatment since the Fund was redesigned.

He believes this new approach has encouraged companies to set “a more realistic” price for their drugs, based on “an understanding that healthcare across the world is facing financial challenges”.

New managed access drugs have been entering the Fund at a rate of roughly one per month since mid-2017. And while the CDF only covers England, drugs being put into the Fund will also benefit patients in Wales and Northern Ireland.

In Scotland, decisions on which drugs should receive NHS funding are made by the Scottish Medicines Consortium (SMC) rather than NICE, meaning drugs in the CDF are considered under the SMC’s normal procedures.

Put simply, the redesigned Fund is a success story. NICE, NHS England and the drugs’ manufacturers deserve credit for moving so many drugs off the Fund and into routine NHS use. And it’s all being done within budget, something the old Fund quickly failed at.

But most importantly, the updated Fund is giving many patients new options and renewed chances of successful treatment, quicker than ever before.