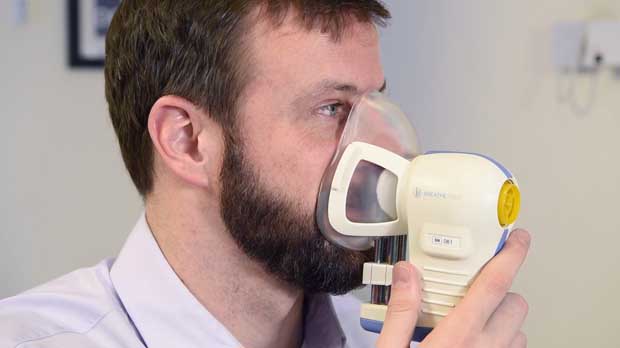 The warning signs for cancer can be vague. When people go to their GP with symptoms like heartburn or indigestion, it’s hard to say during their first appointment if cancer is to blame or if, most often, it’s something far less serious.

At the moment, being offered a simple test that points either way, or flags those who need to go to a specialist for further tests, isn’t possible across a wide range of cancers.

But Professor Rebecca Fitzgerald, a Cancer Research UK-funded scientist from the MRC Cancer Unit at the University of Cambridge, is leading a trial that’s looking to bring a potential cancer test like this closer to the clinic. And all that’s needed is a person’s breath.

“The PAN trial is seeing if you can use a breath test device that detects volatile molecules from the breath to identify patients that might have an early cancer that they don’t know about,” says Fitzgerald.

Testing a range of cancers

The trial, running in collaboration with Owlstone Medical at Addenbrooke’s Hospital in Cambridge, will test the company’s Breath Biopsy® technology that picks up distinctive molecules released by cells as they make and process energy (metabolism).

This is a pilot study, so first we’re looking at a range of cancers to see if we get a signal and compare the signal to healthy individuals.

And it’s the first trial to look at whether this technology can pick up a range of cancers.

“Intuitively, lung cancer seems the most obvious cancer to be detected in the breath,” says Fitzgerald, adding that lung cancer breath studies using the Owlstone tech are already ongoing.

“But because of the way metabolites are recycled in the body, many other volatile molecules from other areas of the body end up in the breath too.”

By 2021, Fitzgerald and the team at Owlstone aim to have collected and analysed the breath of 1,500 people. They want to find patterns, or ‘signatures’, in the breath molecules from people who are either healthy or who have suspected oesophageal, stomach, prostate, kidney, bladder, liver or pancreatic cancer.

“This is a pilot study, so first we’re looking at a range of cancers to see if we get a signal and compare the signal to healthy individuals,” says Fitzgerald.

If the sophisticated tech can tell apart cancer signatures and healthy ones, the team will next see if there are differences between cancer types, or if there’s just one ‘cancer signature’.

Fitzgerald says the most important thing about this trial is the design.

“We’re not just doing this retrospectively with people with advanced cancer,” she says. Instead, the trial will recruit people who have gone to their doctor because they have potential symptoms of cancer, or because they have a condition that puts them at a higher risk of developing the disease.

To give us a better idea if this tech would be useful in GP surgeries, people’s breath signatures need to be recorded no matter what their diagnosis ends up being.

Take kidney (renal) cancer as an example. “We need to compare patients who have suspected renal cancer who might have blood in their urine, but it actually turns out to be nothing, with those who are showing the same symptom but have cancer,” says Fitzgerald.

People at higher risk of certain cancers could be the first to benefit from this type of test. Barrett’s oesophagus is a condition that can sometimes develop into oesophageal cancer, with between 1 and 5 people in every 100 with Barrett’s going on to develop the disease. Rebecca has had Barrett’s oesophagus for over 20 years.

Rebecca, aged 54, has had the condition for over 20 years and needs careful monitoring. She has an endoscopy every 2 years to keep an eye on things.

“I’m used to endoscopies by now, you just have to get on with them. But they can be painful and invasive, so when I have one I choose to be sedated.”

Rebecca says it’s unpleasant seeing the “fairly large” tube go down her throat. “The procedure means a whole day out and it takes quite a while to recover afterwards.”

Endoscopies also leave her very sore because tissue samples are taken from her oesophagus so they can be tested in the lab for cancer cells.

Rebecca says she’d certainly like to see less invasive tests that could be used to detect cancer. That’s why she agreed to be one of the first people to take part in the PAN trial.

“Something like a breath test sounds so much better than what I have to have, so I was very happy to do the trial. After the breath test I felt fine, it was a very easy and there was no discomfort.”

“The more these conditions can be researched, and kinder detection tests developed, the better,” she adds.

Depending on how these early trials go, the breath test could reach further than keeping an eye on those with a raised risk of cancer. This technology has the potential to be used on the wider population as a screening tool to find early cancers in people without symptoms of cancer.

“We need to make it as easy as possible for the individual to have a breath test,” she says. “Ideally the device would be in the GP setting.”

But before the Breath Biopsy® can reach GP surgeries, several large studies would need to confirm any benefits outweigh any risks.

“Eventually, I imagine it used as a screening tool where you test well people, or a triage test that can sit in the surgery to help GPs know who to refer.”

The future of Owlstone’s breath test depends on what the data from this first trial shows. By the time each sample has been analysed they hope to have a fixed breath signature for cancer, or better, multiple signatures that single out different cancer types.

The biggest challenge the researchers face is getting enough patients across the variety of cancers they want to investigate. But Fitzgerald and the team are confident that the simple, non-invasive nature of the test should hopefully mean it gets some interest.

“All we need from our participants is around 10 minutes of breath. I have no doubt that if the individuals come forward, then we’ll have enough data to make the necessary conclusions that, if promising, can bring a cancer breath test one step closer to patients and their doctors.”

If you’re interested in being involved in the clinical trial, please email Rachel de la Rue, research nurse: [email protected]. Healthy volunteers don’t need to live in the Cambridge area to take part, but they would need to be prepared to travel to Addenbrooke’s hospital in Cambridge for the study. Other participants will be recruited following a referral from their GP and will therefore likely come from the local area.

These trials sound wonderful to detect cancer at its early stages.
Will they eventually be done nationwide?

Sounds great! I really hope this becomes a part of a doctor’s surgery to put patients minds at rest and detect cancer early in other patients, so there is an increased chance of survival. I’m forever worried about getting cancer ever since losing 2 members of my family with it- it’s caused health anxiety.

I am in remission from breast cancer and would like to take part in your trials.

Brilliant why don’t they do a small charge do people can just go and have this test.

I think if the breath test device is fully developed, it will improve a better way of detecting multiple cancer,and also reduce the painful invasive system.

I have Barrett’s Osophegus and it’s monitored by endoscopies which are extremely uncomfortable and scary. I hope the Breathe test will eventually be used to check my Barrett’s in the future.

Thanks everyone for your comments.
If you’re interested in being involved in the clinical trial, please email Rachel de la Rue, research nurse: [email protected]. Healthy volunteers don’t need to live in the Cambridge area to take part, but they would need to be prepared to travel to Addenbrooke’s hospital in Cambridge for the study. Other participants will be recruited following a referral from their GP and will therefore likely come from the local area.
Best wishes,
Nick, Cancer Research UK

I have breast cancer which has led to skeletal and spinal cancer I would be very happy to be used under this trial and hope to help others. I am terminal but well at 50

How do I apply for this trial?

I think it’s a great thing yo do I have endoscopy as I keep getting pain.

How can we apply to participate?