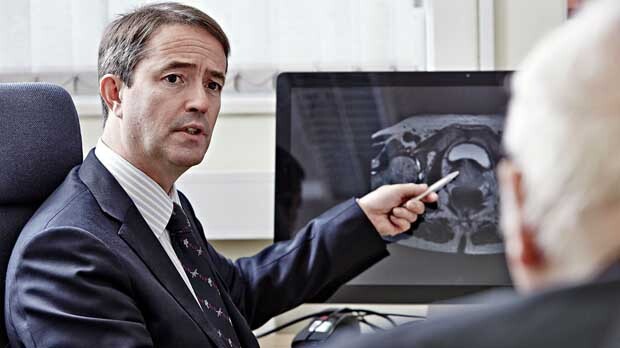 A drug already licensed to treat some breast and ovarian cancers has been found to be effective for some men with advanced prostate cancer.

The targeted cancer drug olaparib is designed to take advantage of a weakness in some prostate cancers’ ability to repair damaged DNA.

The treatment was found to block prostate cancer growth more effectively than hormone treatments in some men with faults in genes linked to DNA repair, including BRCA. The latest results are published in the New England Journal of Medicine.

“This paper successfully shows you can molecularly select men whose prostate cancer has BRCA or other DNA repair errors with a new class of treatment that’s not currently licenced for prostate cancer. We can see clinically meaningful gains, in both progression free survival and overall survival.” – Professor Nick James, prostate cancer expert

Olaparib is a type of PARP inhibitor that works by specifically targeting cancer cells with faulty DNA repair genes.

PARP inhibitors targeting BRCA and other mutations are a well-established treatment for breast and ovarian cancer.

Researchers tested the benefits of olaparib for men whose prostate cancer had stopped responding or had not responded to hormone therapies.

A team from The Institute of Cancer Research and The Royal Marsden NHS Foundation Trust tested the benefits of olaparib in a trial involving 387 men whose cancer had stopped responding or had not responded to hormone therapy and had spread to other parts of the body.

This type of crossover therapy is not typical in the NHS as it has not found to be effective once prostate cancer has progressed.

Men with prostate cancers that had faulty BRCA1, BRCA2 or ATM genes benefited the most from the treatment, with their cancer not growing significantly for 7.4 months on average, compared with 3.6 months for those taking either enzalutamide or abiraterone.

Men with alterations in any of the other 12 pre-selected DNA repair genes also benefitted from taking olaparib.

Overall survival for men with faulty BRCA1, BRCA2 or ATM genes was 19 months on average after treatment with olaparib, compared with 15 months for those taking abiraterone or enzalutamide – despite the fact that more than 80% of the men who started the trial on hormone therapy eventually switched to olaparib when their cancer progressed and spread.

“Significantly, most of the men in the control group eventually crossed over to getting a PARP inhibitor, and despite the cross over, you still see a survival gain, which is really important,” said James.

Longer follow-up will be needed to confirm survival benefits.

Researchers hope to see olaparib made available on the NHS for patients whose advanced prostate cancer has faulty DNA repair.

Professor Johann de Bono, who co-led the study at The Institute of Cancer Research said: “It’s exciting to see a drug which is already extending the lives of many women with ovarian and breast cancer now showing such clear benefits in prostate cancer too. I can’t wait to see this drug start reaching men who could benefit from it on the NHS – hopefully in the next couple of years.

“Next, we will be assessing how we can combine olaparib with other treatments, which could help men with prostate cancer and faulty DNA repair genes live even longer.”