Coronavirus reports – Part 10: “I didn’t see my mum before I went into surgery” 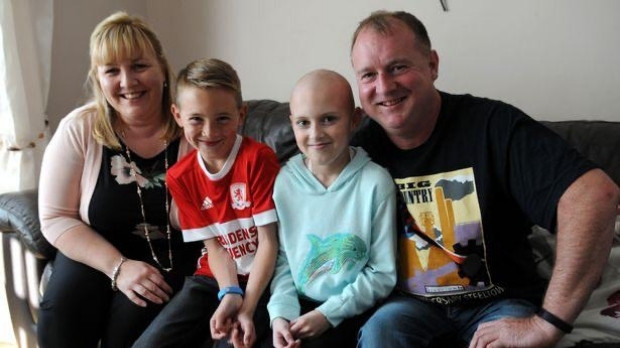 Rebecca and her family.

This Childhood Cancer Awareness Month, we caught up with families who have been affected by children’s and young people’s cancers to find out how the coronavirus pandemic has impacted them and their loved ones in the last instalment of our coronavirus reports series...

Sneha: “I didn’t see my mum before I went into surgery”

Sneha was diagnosed with a fast growing glioblastoma multiforme in March 2021, at just 17 years old.

It was sudden. “I started getting migraines at the start of March 2021. The following week, I couldn’t eat or drink without being sick.”

Because of the pandemic, Sneha went to A&E by herself, but, following some initial tests, they didn’t keep her in overnight. At the same time as the headaches and sickness, Sneha was experiencing eye pain, so went to see an optician. The optician could see there was something wrong with the back of her eye and on March 13th, she went back to A&E with her mum. Sneha was diagnosed with glioblastoma multiform when she was 17 years old.

After further tests, Sneha was told she had a tumour in her brain. “We had gone in [to A&E] in the evening and it was 10pm when we saw the doctor, and it was the middle of the night when I was sent by ambulance to John Radcliffe hospital in Oxford for more tests. Because of COVID-19, my mum was not allowed to come with me in the ambulance.

“I was in pain, and I wanted her to come, but she wasn’t allowed”

The following day, Sneha underwent emergency surgery. “I didn’t see my mum before I went into surgery, but she was there when I woke up at around 8pm that night. She was allowed to come back every day then, and her and my younger sister have been really supportive,” she says.

Following surgery and a diagnosis of high grade glioblastoma, Sneha started radiotherapy and a course of chemotherapy. “My dad lives in Switzerland but came back and had to isolate before he could come to help and take me to radiotherapy,” Sneha adds.

Sneha is now being treated with chemotherapy, which is due to finish at the beginning of next year. She’s looking forward to going travelling and being more independent when she finally finishes her treatment.

Tracy and Rebecca: “It is hard not to have that contact with other people”

In 2014, when Rebecca was 8 years old, she was diagnosed with rhabdomyosarcoma, a type of soft tissue sarcoma. Her initial treatment finished in October 2015, but since then the cancer has come back 3 times.

In early 2020, Rebecca had another round of chemotherapy, followed by surgery. And when the pandemic brought the world to what felt like a standstill in March, Rebecca was advised to isolate.

Rebecca’s mum completely understood the need for precautions, but says it hasn’t made it easier on the family – particularly when it came to hospital appointments.

“At the start of the pandemic, we suddenly moved to being at home, and having phone calls instead of face-to-face consultations,” says Rebecca’s mum, Tracy.

This change was disheartening as for Rebecca, many of her appointments were hands-on, to feel for lumps.

“That “security blanket” of appointments was gone,” Tracy explains. “At the same time, we heard stories of staff at the hospital being affected by COVID-19, and one of Rebecca’s nurses sadly died, which had a huge impact on the community here.”

In the midst of the pandemic, Rebecca’s cancer came back and she needed to start treatment again. But with new restrictions and protocols, everything was different this time around. 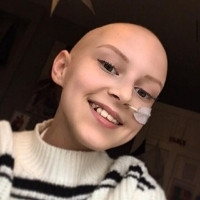 Rebecca was first diagnosed with rhabdomyosarcoma in 2014.

“She was poorly one day at 5am, and we had to go to A&E for 3 hours to get admitted to the ward before getting a platelet transfusion – it took all day and we got home in the evening. Two hours later, her temperature spiked again, and we had to do 3 more hours in A&E to be back on the ward again after midnight,” says Tracy.

“It makes everything so much more uncomfortable for Rebecca as she is always being moved and can’t rest. It’s frustrating, but it’s Rebecca who bears the brunt of it. Having cancer is hard enough as it is.”

And the restrictions haven’t just affected Rebecca’s treatment. “When we heard Rebecca relapsed, I was told the news on my own. It’s so hard to hear news like this, try to take it in, ask questions and then drive home.

“With our son Jake too, this “one-parent” rule has been hard, especially when there was a COVID-19 case in his class and we had to keep him apart from Rebecca in case it meant she could not have her treatment.”

Beyond their family unit, Tracy says the pandemic has shattered the sense of community on the children’s cancer wards. “As you can’t mix so much, it is so much more lonely. We don’t have the connections that have helped us through the experience for so many years.

“On top of everything, we don’t know if we are wasting precious time with Rebecca – we know the future is uncertain and we want to be making memories. That has made all of the isolation and restrictions so much harder – we want to be making the most of every moment with her.”

Kian, 11, began to notice that he was losing weight and was lethargic in early 2020, says his mum Keri.

“He was tired after school and we took him to the doctor in March who said he should have some blood tests done. At that time COVID-19 was starting to really take over the news and it meant that the tests got cancelled,” she says.

“Of course, we understood how the pandemic was affecting everything, so we waited but the tests got more delayed and he was still so poorly. We started to worry and were pushing to get the tests done. It was incredibly stressful.”

Eventually, Kian was diagnosed with chronic myeloid leukaemia, a type of blood cancer, in July.

When Kian was admitted to Great Ormond Street Hospital, Keri was the only one allowed to go with him. Kian was diagnosed with a type of leukaemia in 2020.

“When we were there, it was so isolating. There was so much to take in and I felt so petrified of COVID-19 even in the hospital wards. The staff were brilliant, but the children couldn’t mix and there was only one parent allowed in the kitchen at any time. We felt very alone, and I remember Kian had to walk on his own to have a bone marrow biopsy – that was hard not to be able to be with him.”

When they got home after that, Kian continued his treatment. Keri says that they cut themselves off as much as they could to reduce any chance of them becoming ill with COVID-19, which despite the isolation came with some positives.

“My husband is usually away with work but he was there and we were together as a family to deal with it. And lockdown took some pressure away too – Kian was with us all the time and we didn’t have to make any excuses for not going to things – as those things weren’t happening anyway. Another positive is that everyone is washing their hands a lot more and is so aware of how important that is – we are happy with that!”

But despite doing everything they could, Keri and her husband, and Kian’s brother and sister all tested positive for COVID-19 last December.

“Thankfully Kian was the only one not to get it, but we were so scared, wearing gloves and keeping apart in different rooms. We were so worried that, if he had had any medical issue at that time, he might have had to go in by himself as we would not have been allowed to go with him.”

Whilst his mum says he is still having the ups and downs of treatment and side effects, Kian started secondary school this month.

“With COVID-19 and the treatment, we are still trying to find a balance between keeping him safe and giving him normality.”

Thanks to Sneha, Kian and Keri, and Tracy and Rebecca for sharing their experiences with our Media Volunteer Liaison team.