Cancer in children and young people: how far we’ve come 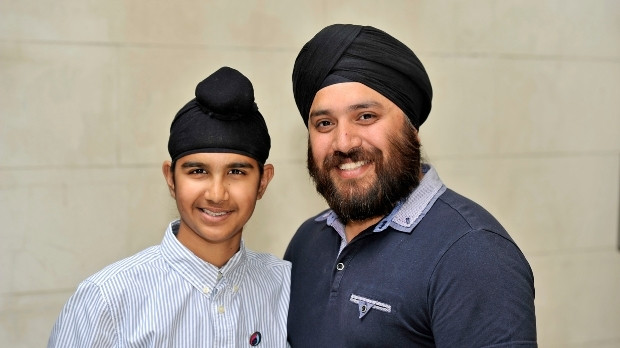 Amarvir (pictured with his dad Jag) was diagnosed with acute lymphoblastic leukaemia in 2010. He is now 17 years old.

Cancer in children and young people is different to and, thankfully, much rarer than cancer in adults.

But survival for children and young people hasn’t always been this high – in the 1970s, just over a third of children diagnosed with cancer in Great Britain survived for 10 years or more.

According to new estimates from Cancer Research UK, if mortality rates for children and young people with cancer in the UK had stayed the same as their peak in the early 1970s, almost 30,000 more children and young people would have died from cancer. These deaths have been avoided thanks in part to the progress we’ve made in diagnosing and treating these cancers through research.

However, survival for some children’s cancers has barely improved. And many of those who do survive experience serious, long-term side effects from their treatment.

We spoke to Professor Marc Mansour, a clinician scientist based at University College London who specialises in blood cancers in children and young people, about what has enabled this progress, why it hasn’t been equal in all childhood cancers, and where we need to go next. Professor Marc Mansour, a clinician scientist based at University College London who specialises in blood cancers in children and young people

A greater understanding of the biology

A key factor that Mansour thinks has contributed to this progress is that we now have a greater understanding of the biology of children’s and young people’s cancers.

“We understand the disease better now from a biological standpoint,” says Mansour. “We understand the molecular basis of what’s going on, and that’s not only useful for being able to tell whose cancer will respond to treatment, but also for developing new treatments and figuring out who’s likely to benefit from them.”

This progress has meant we’ve been able to change the way we treat children and young people with cancer for the better.

“One of the biggest landmarks in cancer treatment came in the 1970s where it was shown that combination chemotherapy, rather than a single drug alone, was able to cure some cancer patients.

“Importantly, particularly for acute lymphoblastic leukaemia (ALL), we’ve been able to move away from a one-size-fits-all approach to chemotherapy intensity, which was the traditional way of doing things. We can now gauge which patients need the most intensive therapy, because they have high-risk disease, and de-intensify treatment for those who have relatively low-risk disease,” says Mansour. “This is an important step in limiting the long-term side effects for these patients.”

As well as guiding the way we use chemotherapy, understanding the biological underpinnings of childhood cancers means we can identify specific weaknesses in patients’ tumours that could be targeted by particular treatments, giving way to a future of personalised medicine where patients receive therapies tailored to their tumour.

Our progress in children’s and young people’s cancer research

Cancer Research UK’s scientists have made vital contributions to finding new and better ways to treat children’s and young people’s cancers to improve survival and reduce long-term side effects. Below are a few of our most important discoveries:

1974 – Our researchers show that there are different types of childhood leukaemia, boosting understanding of the disease. This leads to the development of more targeted and effective treatments, helping more children survive.

1988 – Our scientists develop a test for children with an inherited form of retinoblastoma, a type of eye cancer, meaning they can be treated early. This helps boost survival for the disease – now almost every child in the UK survives this cancer.

1997 – We finish carrying out the first UK clinical trials in children with the bone cancer Ewing sarcoma, which help bring about improvements in survival.

2004 – Results from a clinical trial we funded for hepatoblastoma, the most common childhood liver cancer, help to define the best combination and sequence of surgery and chemotherapy to improve survival.

2006 – A decade-long clinical trial that we funded finds that giving chemotherapy before surgery reduces the side effects caused by treatment for Wilms tumour. And in 2016, further results from the trial show that some children can also safely be given less chemotherapy after surgery, reducing the risk of long-term side effects for these young patients.

2010 – A ground-breaking trial of a drug called mitoxantrone that we helped fund, shows how it could dramatically improve survival in children whose acute lymphoblastic leukaemia (ALL) has returned. This revolutionised the way some children with ALL are treated.

2018 – The SIOPEL-6 clinical trial that we supported shows that giving sodium thiosulfate with cisplatin chemotherapy almost halves the risk of hearing loss for young patients with hepatoblastoma, the most common childhood liver cancer.

And we continue to fund research into children’s and young people’s cancers to keep up this momentum, including 5 new teams of scientists awarded up to £1 million each through our Cancer Research UK–Children with Cancer UK Innovation Awards.

Mansour compares the progress of science to the philosophy of marginal gains, where if you take something and break it down into its component parts, and improve them all by just 1%, you’ll get a sizeable improvement when you put them back together.

“David Brailsford transformed British cycling in the early 2000s using the concept of marginal gains,” says Mansour. “And I think a lot of what we’ve seen in the improvements in outcomes of paediatric cancer can be attributed to these small impacts that have taken place over the years.”

He says that improvements to many of the things people don’t even think about have allowed us to progress as far as we have.

“We have better supportive care. We’ve got better antibiotics, so when patients’ immune systems are weakened, the mortality isn’t as high. We’ve got better antifungal therapy, so people aren’t dying of fungal infections. We can do bone marrow transplants more safely and manage the complications better. These supportive care measures, including better ICU care, have all made a big impact over time.” Whilst survival in the UK has increased overall for children and young people with cancer in recent decades, progress hasn’t been equal among the different types.

“Fortunately, the most common paediatric cancer, childhood acute lymphoblastic leukaemia (ALL), has seen some of the best progress in survival. It was almost universally fatal in the 50s and 60s, and now over 90% of patients are cured, which is spectacular,” says Mansour.

Despite ALL’s high survival, it still contributes a large proportion of cancer deaths in children and young people because of how common it is compared to other cancers. Mansour says that improving outcomes further is a focus of the work he does, looking at why some cancers either don’t respond to or become resistant to chemotherapy.

But the most common cause of cancer deaths in children and young people up the age of 24 is brain and spinal tumours. Something scientists are keen to change.

Because of this, Mansour stresses that early diagnosis is vital to improving childhood brain tumours outcomes, as well as developing new and more efficacious drugs that can cross the blood brain barrier – the boundary between the fluid that surrounds the brain and the blood that circulates around the rest of the body.

Developing the next generation of treatments for children with brain tumours means we have to revolutionise our understanding of what makes these cancers tick, learning about the genetic errors that can cause them and the features unique to them and their environment that can be targeted with new drugs.

But bringing any new drugs to the clinic for children and young people comes with challenges, as clinical trials usually begin in adults, whose cancers differ from children’s and young people’s. As well as this, as cancer is rare in children, getting big clinical trials that involve thousands of patients is difficult without large-scale collaboration, something that will be vital to progress in the future. The future is personalised

Mansour believes that tailoring treatments is key to future progress for children’s and young people’s cancers.

“Precision medicine is definitely the way that the field is moving. And that really means giving individual therapies for individual tumours, because every patient is different,” he says.

Whilst precision medicine is beginning to come into its own for treating adult cancers, the field is only just truly emerging for children’s and young people’s cancers.

The launch of 2 studies we fund gives hope for the future of targeted treatments for children and young people: the Stratified Medicine Paediatrics platform is now routinely sequencing children’s tumours once their cancer has relapsed. The patients may then be enrolled onto a clinical trial, such as the innovative ESMART trial, where they are matched to the best treatment for their cancer.

Mansour has teamed up with Dr David O’Connor, Dr Jack Bartram and Professor Owen Williams at Great Ormond Street Hospital for a Cancer Research UK–Children with Cancer UK Innovation Award to personalise treatment for the most aggressive types of childhood leukaemia through the REVEALL trial (RElapse-specific therapeutic Vulnerability Evaluation in childhood & young adult ALL). The study will test over 100 new drugs against each patient’s leukaemia sample.

The introduction of immunotherapies has also been a “game-changer” according to Mansour. “This has really applied to diseases like neuroblastoma and B cell acute lymphoblastic leukaemia, where targeted immunotherapies have been developed to treat them if they come back after treatment.”

So far, immunotherapies have mostly been used as a second or third option in children and young people, who will be treated with chemotherapy initially and given immunotherapy if their cancer comes back or doesn’t respond to treatment.

Trials are currently underway exploring exactly where in treatment protocols these new approaches can be introduced and which chemotherapy drugs they can safely replace.

Mansour believes that a shift away from chemotherapy and using targeted immunotherapy earlier in treatment is key. This approach has the potential of sparing patients from years of intensive therapy and reducing the amount of long-term side effects that many children and young people can suffer from as a result of their treatment.

We’ve come a long way since the 70s, but we’re not done yet. We’re committed to making more of this research happen, so that more children can survive their disease with as few side-effects as possible.