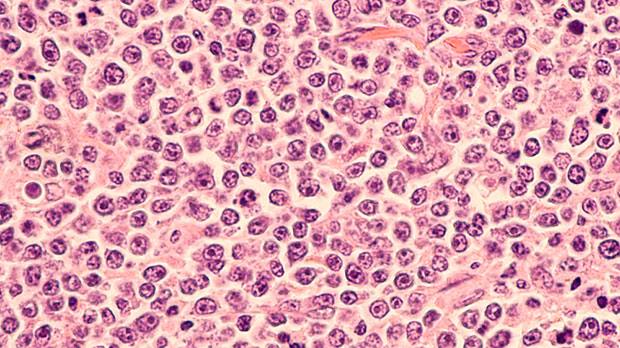 Ibrutinib, a drug used to treat Waldenstrom’s macroglobulinaemia, is not being recommended by the National Institute for Health and Care Excellence (NICE) in England for adults who have had at least one previous treatment.

The drug, which is sold under the brand name Imbruvica, has been available for people in England through the Cancer Drugs Fund (CDF) since November 2017.

This decision will be disappointing for people affected by Waldenstrom’s macroglobulinaemia, particularly given currently there are very few effective treatment options for these patients.

In these low-grade lymphomas, abnormal cells called lymphoplasmacytoid B cells fill up the bone marrow or enlarge the lymph nodes or spleen.

People with Waldenstrom’s macroglobulinaemia also have a high level of a protein called immunoglobulin M in their blood, which makes blood thicker and can cause problems with circulation.

There is no established standard of care for Waldenstrom’s macroglobulinaemia. Treatment options for include chemoimmunotherapy, or when that is unsuitable, monotherapy with rituximab or chlorambucil.

The decision not to recommend ibrutinib was made following an appraisal that reviewed evidence collected as part of the CDF managed access agreement for ibrutinib. The new evidence includes data for ibrutinib from clinical trials and from people with Waldenstrom’s macroglobulinaemia treated with ibrutinib via the CDF.

Despite ibrutinib improving how long people live before their condition gets worse, and how long they live for overall, it’s uncertain by how much compared with chemoimmunotherapy. This uncertainty means further data collection on progression of the treatment and overall survival is needed.

As a result, NICE’s final draft guidance does not recommend the drug for adults who have had at least one previous treatment. Additionally, the guidance states that the cost estimated of the drug are higher than what NICE usually considers a cost-effective use of NHS resources.

Any patients currently receiving ibrutinib as part of the CDF will continue to have their treatment funded by Janssen Pharmaceuticals, the company that makes it, once the CDF funding ends.

NICE decisions are usually adopted in Wales and Northern Ireland as well as England, so the decision is likely to affect patients in all 3 nations, however the drug was approved by the Scottish Medicines Consortium for use in Scotland in December 2021.

“Current evidence suggests that ibrutinib does improve patient outcomes, but given the uncertainty surrounding this benefit compared to currently offered treatments it is important that further evidence is gathered to establish ibrutinib’s efficacy,” adds Gray

“The time and cost it takes to develop a new medicine – especially innovative drugs which may offer new ways to treat cancer – mean cancer drugs can often come with high price tags.

“At the same time, we recognise the problem of long-term affordability of new cancer drugs and urge the NHS and drug companies to consider long-term solutions to this. Drug prices should ensure value for money for the NHS while also rewarding companies for innovations that genuinely benefit patients.”