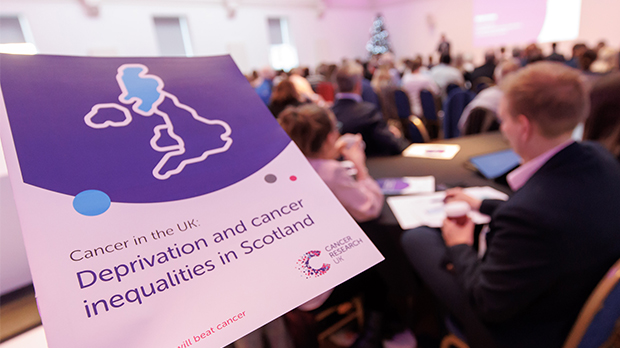 This year we have seen three different Prime Ministers and UK governments. Amongst the political turbulence, we’ve accomplished a lot in cancer policy and campaigning in all four nations of the UK and globally. From research and prevention to diagnosis, we’ve been advocating for change to beat cancer. Here are some highlights.

1. Cancer Plans across the four nations To beat cancer in the UK, there needs to be a fully funded, comprehensive government plan on its approach to cancer, in each of the four nations. A cancer plan would be an opportunity to improve outcomes for people affected by cancer in the future. We are calling for cancer plans to put innovation at the heart of cancer services to reduce waiting times, improve early diagnosis and transform cancer outcomes.

In some nations, this year has seen great progress on cancer plan development.

In Spring, the Department of Health for Northern Ireland published a ten-year cancer strategy for Northern Ireland. It contains 60 ambitious recommendations with the aim of transforming cancer services, tackling inequalities and helping more people survive the disease.

However, due to political instability in Northern Ireland, the implementation of the strategy has stalled. In the absence of the Executive, we continue to meet with officials to press for actions within the strategy to be taken forward.

There has been progress elsewhere too. It was announced earlier this year that each of England, Scotland and Wales have cancer plans in development.

We’ve been working with both the Scottish and Welsh governments on their plans and expect to see their publication early next year. So, watch this space.

In England, we coordinated clinicians and our volunteer Campaign Ambassadors to respond to the consultation on the 10 Year Cancer Plan for England. Since the initial consultation, we have seen two new governments in Westminster. Both the Johnson and Truss governments affirmed their commitments to the plan. The current Prime Minister, Rishi Sunak however, has not.

A fully funded strategy for cancer in England is critical to improving cancer survival. The current UK government must match the action of the devolved nations and commit to publishing the 10 Year Cancer Plan for England. So, this is something we’ll continue to call for into next year, alongside other cancer charities, organisations and our supporters.

2. Launching our campaign for a #SmokefreeUK Smoking continues to be the biggest cause of cancer in the UK, responsible for 15% of all cancer cases – around 150 cancer cases per day. The UK Government currently has an ambition to make England smokefree by 2030.

The former health secretary commissioned an independent review to help them understand how to meet their target.

In June, the Khan Review was published, laying out the roadmap that the UK Government should follow to make England smokefree. Amongst other things, the review highlighted the need for well-funded stop smoking services to help people to quit smoking. In 2021, largely due to funding cuts, only 67% of local authorities in England commissioned a specialist stop smoking service open to all local people who smoke.

We welcomed the review, its insights and recommendations. Now the government must respond to the review by producing a robust Tobacco Control Plan for England.

So, in July, we launched our campaign for a #SmokefreeUK. Over 60 of our Campaign Ambassadors gathered in Westminster to urge the government to act. And many more have taken our campaign action, over 2,000 to date.

We want to stop people from ever starting to smoke and help those who currently smoke to stop. So, with your support, we are asking the UK Government to stop the start by launching a consultation on raising the age of sale of tobacco. And start the stop by funding public health campaigns and stop smoking services to help people who currently smoke to stop. If the government cannot pay for this, the tobacco industry must be made to.

To build our campaign and put pressure on the UK government, we are asking MPs to join us. So far, over 90 MPs have pledged to be a ‘Smokefree MP’. Is yours?

We aren’t only concerned with campaigning for tobacco controls in the UK. In 2012, 65% of all cancer deaths globally occurred in low- and middle-income countries (LMICs), and 44% of these deaths are attributed to preventable risk factors, including tobacco. To beat cancer, our mission must be global.

This year, we’ve supported great progress in Sri Lanka and Nepal, helping to secure increases in tobacco taxation. To get this done, we have partnered with think tanks in these countries since 2019.

In their 2022 budget, the Government of Sri Lanka announced the first increase in tobacco tax in three years with an average 7% increase to the tobacco tax rate. Our local partners, the Institute of Policy Studies of Sri Lanka (IPS) worked with ministers and MPs to help deliver the change.

But that’s not all. In May the Nepali Minister of Finance unveiled the Nepal 2022 Budget. This included their second biggest increase to tobacco tax in a decade. We fund the Nepal Development Research Institute (NDRI),who have contributed to this amazing increase.

The successes we have seen this year in tobacco control have been encouraging, but we must keep working with partners across the world to have tobacco control prioritised, just like we are doing in the UK. The second biggest cause of cancer, after tobacco, is overweight and obesity. This year, we’ve made progress on that issue too. With your support, we have been campaigning across the UK for action to restrict retail price promotions on foods high in fat, salt and sugar.

Such promotions encourage people to buy more than they need or intended to buy in the first place. These are not ‘good deals’ for our wallets or our health. Retailers making the switch to put healthier products in the spotlight would have a real impact on consumers, and make it easier for people to maintain a healthy weight.

We welcomed news that both the Welsh and Scottish Governments are taking the important first steps to start planning to implement these promotion restrictions in their nations. It is expected that both governments will introduce formal legislation to their Parliaments next year. We will continue to work with, and advise, both governments to help shape the legislation and its implementation. And, after a successful campaign last year, we were looking forward to similar restrictions coming into force in England in October 2023.

On our long-time push for junk food advertising restrictions on TV and online: we are so near, and yet not quite there. It is a frustrating setback that the UK Government has now chosen not to implement these measures until 2025. But it is testament to the power of our collective campaigning that the legislation itself was passed in April, despite the political headwinds and strong industry opposition. Research into cancer saves lives. It also helps the economy through supporting jobs and creating demand across supply chains. As governments look to make tough decisions due to rising costs, we need to protect investment in medical research.

These economic benefits can only be sustained if future funding is secured. We used these economic arguments to advocate for continued UK Government investment in research ahead of the autumn statement and were pleased to see there were no cuts to the UK R&D budget. We will continue to highlight the importance of investing in and supporting the UK research environment – the health and wealth of the nation depends on it.

6. New research into inequalities and cancer

A report we published in 2020 found that there were an estimated 30,000 extra cancer cases per year in the UK’s most deprived areas. Earlier this year, Michelle Mitchell, our chief executive officer, wrote that “Where we live should never affect our chance of dying from cancer. Tragically, right now, it does.”

In Wales, we’ve been supporting the Cross-Party Group on Cancer in the Welsh Parliament (Senedd Cymru), to launch a new inquiry into inequalities and cancer. The results and recommendations of the inquiry for the Welsh Government should be released in Spring/Summer 2023.

Cancer-related deaths are 74% higher in the most deprived communities than the least deprived in Scotland.

The report calls for the Scottish Government and NHS to fund and roll out interventions that tackle the known drivers of these inequalities. We must continue to build a stronger understanding of where inequalities exist and what is driving them.

7. Progress on the horizon for NHS workforce shortages Cancer patients have been seeing some of the longest waits on record for diagnostics and treatment. The most recent data showed that the NHS in England has 132,139 vacancies, put simply, the current NHS workforce cannot meet the scale of the demand.

We have been campaigning on workforce shortages since the launch of our Shoulder to Shoulder campaign in 2018, and this year the Cancer Won’t Wait campaign. Calling for both increased funding for the NHS and a clear plan from the Government on how the NHS workforce will meet patient demand.

Ahead of the Autumn statement, we signed a letter to the Chancellor, alongside over 100 health organisations, asking for the publication of a long-term NHS workforce plan.

And the Chancellor promised to deliver on this, announcing that the long-term NHS workforce plan will be published. The plan is a vital first step towards growing the NHS workforce we need. The second step is securing the funding to make it a reality. With your support, we will keep up the pressure so that this vital plan is published in full and is matched with the necessary funding.

The progress we have made this year wouldn’t have been possible without our supporters. Thank you to everyone who has worked with us this year, whether through donating, volunteering or campaigning. We look forward to the new year and continuing to work together to deliver the changes that will help us beat cancer.

Next year will be an important year as we wait to see the results of the progress we have made this year and political parties will start to turn their attention to their General Election Manifestos. Why not make it your New Year’s resolution to help by campaigning with us?

Very informative and shows how support of cancer research is vital