Virus therapy for melanoma – all it’s cracked up to be? On the face of it, this is exciting news. Researchers have created a genetically modified virus that can attack cancer cells directly, as well as marshal the body’s own immune defences against the disease. And they’ve shown in a clinical trial that, for some patients, it can help them.

This is the first time a virus-based therapy has ever been shown to work in a large trial, so it’s certainly a big step forward for cancer research.

But, as always with such things, we need to balance the cautious optimism of continued progress against premature promises and inflated expectation. Much of the coverage this morning has used overblown language, and talked about the treatment being available to patients ‘within a year’.

Experts we’ve spoken to think this is going a bit too far, too soon.

So let’s look at how the treatment works, how the trial was carried out, and what this means for patients.

The new treatment is based on a virus called Herpes simplex virus, which normally causes minor ailments like cold sores.

It was developed originally by researchers at a small biotech company based near Oxford called BioVex, which was bought by US pharmaceutical company Amgen in 2011.

The researchers have genetically modified the virus’s DNA in three crucial ways:

This is sophisticated, almost space-age stuff, the product of more than a decade of work. As Professor Richard Marais, director of our Cancer Research UK Manchester Institute, told the BBC, “it literally causes [cancer] cells to explode, releasing new virus which then infects the surrounding cells.”

It also simultaneously switches on the cells of the the immune system, “and these spread out round your body and find other tumours in your body that weren’t injected, and it hunts them down,” said Marais.

The virus treatment goes by the name Talimogene laherparepvec. But it’s also known as T-VEC (and previously as OncoVEX).

The news today marks the publication of a late-stage (phase 3) trial in the Journal of Clinical Oncology, which was run by an international team of researchers including some at the Institute of Cancer Research at the Royal Marsden Hospital in London.

It involved more than 400 patients, who had advanced melanoma – either stage 3b or c, or stage 4, which is when the disease has begun to spread to other parts of the body.

About half the patients had previously been treated with other drugs. For the other half, the trial was their first treatment. Their average age was 63.

Two-thirds of the patients received regular injections of the T-VEC virus, directly into their tumours, over a period of 18 months. The other third received injections of GM-CSF (the protein the virus produces) as a comparison (‘control’) group. On its own, GM-CSF is not a standard treatment for UK melanoma patients, but trials have shown it can have some benefits.

Overall, 26 out of every 100 patients (i.e. about a quarter) given the virus treatment responded to the drug, 16 of whom gained long-term benefit (what the researchers called a ‘durable’ response).

This compared against six out of a hundred responding to the ‘control’ drug, two of whom had a long lasting response.

But certain groups of patients did better. The drug was much more likely to work in patients who had earlier stage cancers, and who had not previously been treated.

On average, patients survived longer if they were given T-VEC virus therapy rather than the GM-CSF injections. The average survival time for virus-treated patients was 23 months, compared with 18 in the control group.

But these averages hide better news: some of the patients given the virus therapy remain cancer-free.

But the drug wasn’t without side effects, which – for a small minority – were serious enough for them to want to discontinue taking the treatment. 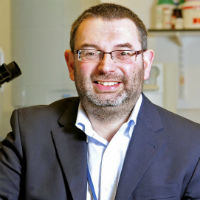 So where does this leave us?

On the one hand, this is tremendously promising. It’s the first time a virus-based cancer treatment has been proven to benefit patients in a phase 3 trial – a landmark in cancer research, and something of which all involved should be incredibly proud.

“It’s the largest randomised study of virus treatment to date, and the field is now moving very quickly,” he told us.

On the other hand, there are – as always – some caveats.

First, the ‘control’ group – as we alluded to above – were not given a ‘standard’ treatment, which makes it very difficult to compare the benefits of the virus against other newer melanoma treatments.

“This trial started years ago, before the arrival of several new melanoma treatments that have completely changed the field. It will be interesting to compare this virus against newer treatments, but a much more exciting question to answer will be seeing how it works in combination with them,” Melcher says.

This is now set to be put to the test in trials. A particularly exciting combination, says Melcher, would be to combine it with a new ‘checkpoint inhibitor’ drug called pembrolizumab. Trials in combination with another similar drug, ipilimumab, are underway in the US.

Second, T-VEC needs to be injected directly into a patient’s tumour. “This limits who it’s going to be suitable for – obviously it works with melanoma, but it’s difficult to see how it will work with other cancer types deeper inside the body or near vital organs,” he says.

Melcher’s team – along with others around the world – are developing virus therapies that are designed to be given intravenously and get to the tumour via the bloodstream, which could have much wider use.

And third, the idea that the virus will be ready for patients ‘within a year’ is overly optimistic. “That’s probably a reasonable time-frame for it to get a license in the US, but that will be for a very niche use – patients with tumours that are accessible to injection, for example,” says Melcher. “And when you factor in things like NICE approval in the UK, we’re looking a bit further off in this country,” he adds.

“The key thing that needs to happen now is we need to work out why T-VEC works so well in some people and not others,” he says, referring to an unfortunate general trend emerging from trials of immunotherapies at the moment. “The response rates seen here – only about a quarter of patients responding – are similar to those of other immune-targeting drugs. Nobody knows who will respond, or why.”

“If we can work out how to safely combine immunotherapies, we can hopefully boost the response rates and help many more patients,” Melcher says.

It’s an exciting time for immunotherapy research, with decades of painstaking and intricate laboratory research finally translating into new approaches to help patients.

But exciting though it is, the field is still in its infancy and there’s a way to go before researchers work out exactly how best to use these new drugs – and how to make sure as many patients as possibly can benefit.