Expert Opinion – treating cancer by exploiting how its DNA is repaired This year’s prestigious Lasker Award was given to US researchers working on DNA repair. So we spoke to two of our own experts – Professor Laurence Pearl and Dr Frances Pearl – about how researchers are targeting fundamental repair processes in our cells to tip cancer cells over the edge.

In every cell in your body, DNA is constantly getting damaged.

But it also gets repaired. And your cells’ DNA repair systems are essential to keep them healthy and working properly.

So it’s no surprise that when these repair processes go wrong, it can contribute to the genetic chaos that underpins cancer.

But what may be surprising is that these same processes can also be exploited to treat the disease.

Understanding how damaged DNA is repaired has been a key focus for cancer researchers, and what we’ve learnt to date has led to new treatments, notably a new family of cancer drugs called PARP inhibitors.

These exploit a weakness in cancer cells that already have faulty repair toolkits – for example, cancers caused by mistakes in the BCRA1 or 2 genes, which are known to be important for DNA repair.

Cancer Research UK-funded scientists played a crucial role in the early development of PARP inhibitors. And the first of them, olaparib (Lynparza), has now been licensed for use within the EU for women with a certain type of ovarian cancer – the first new treatment for these women in over a decade (although there are still ongoing issues with its availability on the NHS).

But the hunt for new understanding – and new therapies – doesn’t end there. Our experts in the field, Professor Laurence Pearl, at the University of Sussex and his colleague (and wife) Dr Frances Pearl, a computational biologist, are digging further. Mistakes in our DNA can have disastrous consequences so, as Laurence explains, our cells have evolved lots of sophisticated ways of repairing it:

“Our DNA is under constant attack, from radiation and chemicals in the environment – such as tobacco and UV rays from the sun – or even the molecules that cells normally make as they go about their everyday business,” he tells us.

“Also, our bodies need cells to divide – to grow, replace old, worn-out cells and heal damaged tissue. When a cell divides it has to copy its entire genome before it splits in two, but the process of copying DNA is not 100 per cent perfect, and mistakes can crop up.”

“However mistakes are caused, it’s really important that cells protect their DNA and fix any damage as matter of priority,” he says.

Luckily for us, our cells are equipped with more molecular mechanics than a Formula 1 team. This team of repair systems, known collectively as the DNA damage response, works hard to keep things running smoothly. And Laurence has spent much of his working life trying to understand how different team members function.

Just as everyone in a racing team has their specialism, cells need mechanics with different expertise depending on the type of damage.

“The most basic repair job is spotting and correcting a wrong letter making up the DNA code. This repair is carried out based on the chemistry of DNA and the precise pairing between the two strands forming the famous double helix,” Laurence tells us.

“The next level up are tools that can repair bigger mistakes – for example, if chemicals from tobacco smoke get attached to DNA, this can cause it to break. The damaged bit of DNA is chopped out and re-built correctly.

“Lastly, cells can spot major architectural faults in DNA – the most common type of mistake in cancer. The cell is a bit of a wreck at this point, with chunks of DNA missing or glued together incorrectly, or ending up with the wrong amount of DNA after dividing.”

What happens in the pit lane?

Whether the cell’s mechanics can get things back on track depends on the type and extent of the damage. Cells come with their own built-in warning systems – molecules that scan DNA on the look-out for problems. If these molecules detect any damage, they immediately flag to the cell there’s a problem.

“The first thing that needs to happen when ‘warning lights’ go on is to stop and figure out what the issue is,” Laurence explains. “Damaged cells halt all but the most essential functions – for example, metabolism will slow down and cells will stop dividing. The next step will be to repair the damage, if that’s possible.”

Small mistakes – like the odd incorrect letter – can be fixed quite easily, and the cell can get back up and running. But too many mistakes, or more catastrophic events like big chunks of DNA being swapped around, are usually too bad to fix.

At this point, the only solution is to admit defeat and retire from the race: the cell activates a self-destruct programme known as apoptosis.

When it comes to DNA damage repair, cancer cells are in a bit of a conundrum.

“All cancer cells have genetic mistakes or abnormalities – that’s what drives their growth,” Frances tells us. “In order to carry on growing quickly they need to turn off some of their DNA checking and repair tools to tolerate these mistakes, otherwise they’d grind to a standstill.

“To make matters worse, the loss of this DNA ‘proofreading’ allows more mistakes to creep in, fuelling more genetic chaos and driving tumour evolution, which we know results in a worse outlook for the patient.”

When Frances looked at how common it was for cancer cells to disable some of their molecular mechanics, both she and Laurence were surprised at just how frequently it happened.

“What’s really stark is just how important it is for cancer cells to ignore some DNA damage,” Frances says.

“We looked at 5,000 samples from a huge online database of cancer research data, called The Cancer Genome Atlas project, and discovered that a large proportion of cancers have mistakes in the genes responsible for the DNA damage response machinery. Of course, we don’t know that these faults definitely mean the machinery won’t work – but it strongly suggests they play an important role in cancer.”

Frances is fascinated by the interactions between all the different molecular mechanics and the decision-making involved in repairing DNA and is using this information to identify new drug targets.

“Simply understanding the many ways the DNA damage response affects the cell is a huge undertaking. There’s a huge amount of chatter between the different repair processes and the signals that normally tell the cell how to act,” she explains. 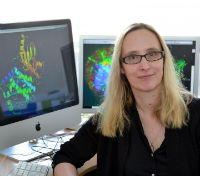 By sacking the team members that check DNA is repaired properly, cancer cells are treading a fine line. If they get rid of too many of the crew and completely lose the ability to fix DNA, it will become so chaotic and disorganised that the cell dies.

So can researchers can take advantage of the situation and push cancer over the edge?

“That’s exactly what we’re trying to figure out” says Laurence. “Trouble is, traditional drug design is based on finding overactive molecules that are driving cancer, then blocking their activity.

“What we’re trying to understand better now is how to overcome the effects of molecules that are missing – which is what we’re dealing with in faulty DNA repair pathways.

“This is where a concept called ‘synthetic lethality’ comes in. We can’t design drugs to bring back missing molecules. But we can look for pathways that cancer cells become reliant upon because of these faults.”

In other words, cancer cells can carry on going with the equivalent of one or two missing wheel nuts and no mechanic to fix it. But design drugs that loosen the remaining nuts, and the wheel comes off completely.

Crashing cancer out of the race

The challenge now is to turn this idea into new therapies for patients. According to Laurence, there are two really promising avenues to try.

“Firstly, cancer patients’ tumours can have faults in different parts of their DNA repair toolkits. If we can understand exactly which DNA repair genes are faulty in a particular cancer, we can maybe start to figure out what type of damage it can’t fix.”

This could transform the ways doctors use chemotherapy. Chemotherapy drugs work by attacking DNA in a range of different ways. By looking for genetic mistakes in a patient’s cancer to find the faults in their DNA repair capabilities, doctors could potentially tailor chemotherapy to inflict a particular type of damage their cancer cells can’t fix.

A diagram of the 3D structure of PARP Credit: Wikimedia Commons via CC-BY-SA 3.0

“The other approach is developing drugs that take away cancer’s remaining ‘wheel nuts’. In theory, these kinds of treatments shouldn’t affect normal cells as much as conventional chemotherapy, because – unlike the cancer cells – their back-up pathways are still intact.

“Combining these two approaches might be even more successful. For example, we know what tools cells use to repair a type of chemotherapy-induced DNA damage called alkylation. Clinical trials are already underway testing a combination of drugs that block these DNA repair tools alongside alkylating chemotherapy,” Laurence explains.

“This combination approach has the potential to overcome cancers that have become resistant to chemotherapy, or reduce the doses that people need by making cancer cells more sensitive to the treatment.”

It’s clear that the DNA damage response is an area of weakness in cancer cells. Targeting it has already led to a new class of drugs for some patients, and it’s ripe for developing new ways to tackle the disease.

Our researchers, like Laurence and Frances Pearl, are unpicking how all these processes work and interlink, and it’ll be fascinating to see how this field develops over the next few years.