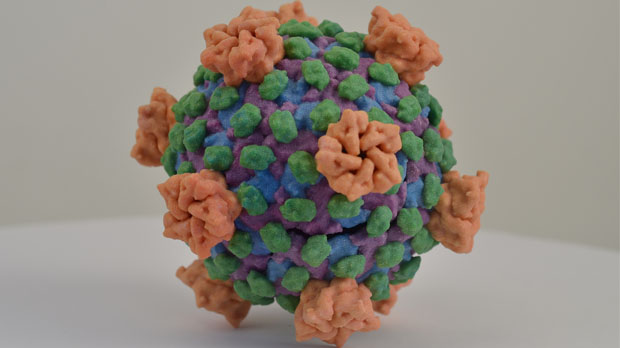 A modified virus could be used to launch an immune attack on liver cancer cells, a new study has revealed.

Researchers at the University of Leeds found that a modified form of Reovirus is able to stimulate the immune system to destroy liver cancer cells in mice.

The study, published in the journal Gut, also found that the virus can stop the hepatitis C virus, which is a cause of liver cancer, from growing.

The researchers suggest that the virus’ double blow may be a more effective treatment than what is currently available for liver cancer.

Studying mice with liver cancer, treatment with the modified Reovirus caused the tumour cells to die. And those that had liver cancer caused by the hepatitis C virus, the viral treatment stopped the harmful virus from reproducing.

The team also found that the modified virus works as a type of immunotherapy, kick-starting the immune system into action against the cancer. This causes the release of an immune molecule called interferon, which activates a type of white blood cell called a Natural Killer Cell.

Study co-leader Professor Alan Melcher, from the Institute of Cancer Research, London, said: “Our study establishes a completely new type of viral immunotherapy for the most common primary liver cancer type, hepatocellular carcinoma, which has a very poor prognosis in its advanced form.”

Dr Adel Samson, a researcher on the study from the University of Leeds, said the approach of using viruses to treat cancer in this way was showing promise in clinical trials. And that “the first such virus has recently been licensed as a medicine for the treatment of skin cancer”.

The majority of cases are linked to infection with the hepatitis B or C viruses, which can cause damage to liver cells and scarring of the organ over time.

“These early results also suggest this oncolytic virus could be used more widely in the treatment of virus-driven cancers.

“In these cancers, the viruses can represent a major hurdle for treatment, so we urgently need new and effective ways to tackle the root of the problem. The next step will be to see if this technique will work in patients.”

Samson, A. et al. 2016. Oncolytic reovirus as a combined anti-viral and anti-tumour agent for the treatment of liver cancer. Gut.