Live from inside the human body: robots, blue dye and bowel cancer

In a world first, we’ve just broadcast a colonoscopy live on TV with Channel 4 to demystify and take the fear out of this procedure – a common test that can help prevent and diagnose bowel cancer. And it’s thanks to research that people can benefit from colonoscopy today.

You can watch the broadcast below (WARNING: Contains graphic medical content):

To find out more, we caught up with Dr Sunil Dolwani, from Cardiff University and the Cardiff and Vale University hospital who carried out the live procedure, to hear about his research that could improve the precision of colonoscopies.

‘I didn’t have any symptoms’

“I didn’t have any symptoms and wouldn’t have thought of doing it if it wasn’t for my brother being diagnosed with bowel cancer.”

These were words of Phil, one of my patients, who had completed the home testing kit sent as part of the national bowel cancer screening programme and, after an abnormal result, was found to have tissue growths (polyps) in his large bowel.

There are various reasons why people might not want to do a bowel screening test, but we know the test saves lives from bowel cancer. And when diagnosed early, the disease is much easier to treat.

But, as in Phil’s case, it has struck me on many occasions during a colonoscopy where I’d diagnosed either bowel polyps or cancer that the patient was surprised that there was something significant going on without them knowing.

A colonoscopy involves inserting a flexible tube with a camera and small loop on the end into the bowel and can be used to remove polyps painlessly. Most polyps are harmless, but some can develop into cancer, so removing them can prevent bowel cancer from developing.

And a part of my research focuses on ways to improve colonoscopies.

Blue Dye and the flat polyps

A few years ago we realised that some types of polyps that can lead to bowel cancer can be quite difficult to find during a colonoscopy.

They are quite flat in shape and hide themselves with a covering of mucous within the bowel. If these flat polyps aren’t seen during a standard colonoscopy then a few months or years down the line some of these could develop into cancer.

But I thought of a way we could try and make it easier for us to find these hidden flat polyps and hopefully remove them before they become cancerous.

The new technique involves spraying a blue dye (a harmless food colouring agent) into the bowel during the colonoscopy. As shown in these images, the blue dye makes the flat polyps much easier to see. 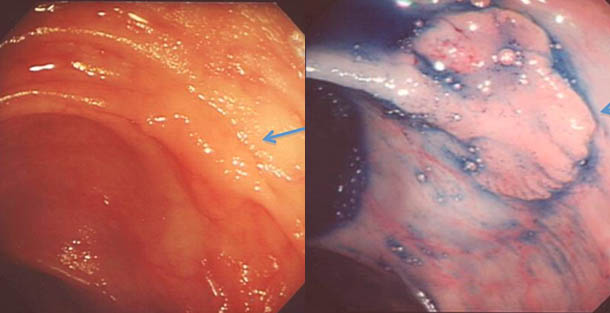 Spotting bowel polyps with and without the blue dye.

We’ve tested the approach in a study – called CONSCOP – where people who’ve had an abnormal result through bowel cancer screening and are about to have a colonoscopy were offered a chance to take part.

And we’re just about to finish analysing the results, which may give us a way to ensure these flat polyps can no longer stay hidden.

What amazed me (and many others) was that nearly 85% of the people who were offered the chance to take part in this study were enthusiastic and signed up. It’s this kind of support and enthusiasm from patients that is so rewarding, and it’s helping us to put research into practice and improve early diagnosis of bowel cancer.

The robot and the computer

Years of talking to patients during their colonoscopy procedures (and after having one myself a few years ago) have made me appreciate the following:

Pondering over this with colleagues it struck me that we might have a solution to some of these issues.

Cancer Research UK ran a workshop for innovative ideas to help diagnose cancers earlier. And as on other occasions, putting heads together often leads to new ideas to solve old problems.

In this case through combining the skills of engineers, computer programming experts and laboratory chemists we felt that there might be a way to test something new to help our patients in this situation.

A standard colonoscope is a very sophisticated device where a telescopic flexible tube has a video camera linked to it and controls that the doctor or specialist nurse uses to move the tip of the scope gently around the bowel.

But we think that a new type of disposable semi-automatic robotic colonoscope could make the procedure easier to carry out.

It’s controlled partly by a motor, rather than only by manual control. And we’ve just finished a study where we use a mock-up of a bowel and put this new robotic camera through its paces.

We asked different experts and trainee doctors and specialist nurses to operate the camera. And we’re quite excited about starting a study in patients referred to us for colonoscopy.

If successful, it could lead to us testing whether the procedure could even be done at a GP surgery with a video of the results recorded at the time. But it’s still early days.

Where does the computer come in?

A colleague in my team is an expert in computer programming, and is going to train a computer to automatically spot any abnormalities on the colonoscopy video that suggest the patient may need further tests to confirm bowel cancer.

Training the computer will involve me noting down all the abnormal areas that show up on screen, then with the computing experts teaching the programme what normal, abnormal and cancer cells look like.

We feel quite excited about the early results. But we need to do more research to keep testing the computer.

The whole person (not just their bowel)

Whether it’s from numerous research studies or just conversations with my mates watching the rugby, there is no doubt that there is a reluctance among men and women to do the bowel cancer screening test or go to the GP until it’s quite late.

And we’re hoping to do some research exploring the reasons behind this soon.

We will try and look at the whole person (not just their bowel), focusing on their diet, lifestyle and other aspects to potentially find out more about those who aren’t keen for us to look for “clues in the poo”.

But whatever the outcome, I’m optimistic that together we can translate all this research into ways of vastly improving the outlook for people with bowel cancer.