A microscope image showing the lining of the bowel. Credit: David Huels and Professor Owen Sansom

Bowel cancer is the fourth most common cancer in the UK, with around 41,000 people diagnosed each year. And rates are rising.

More than half of UK bowel cancers could be prevented by things such as keeping to a healthy weight and cutting down on alcohol. But research, particularly into screening, is also helping find ways to prevent the disease, or spot cases earlier.

In the UK, men and women are sent a bowel screening kit they complete at home, called a faecal occult blood test (or FOBt). The test looks for minute traces of blood in poo, which can help spot bowel cancer at an early stage, when a person feels healthy and has no symptoms.

These kits save lives, and those choosing to take part reduce their risk of dying from bowel cancer by a quarter.

But a new study – part-funded by Cancer Research UK and published today in The Lancet – looks at the impact of another part of bowel screening called bowel scope.

Results from a 2010 study showed that the risk of developing bowel cancer was reduced by a third, and the risk of dying from the disease by more than 40% in people who took up the offer of bowel scope screening.

And we can now say for the first time, based on today’s latest follow-up data, that these benefits last for at least 17 years.

This is all the more incredible when you consider that it’s a one-off test.

How can a screening test prevent cancer?

Bowel scope uses a thin, flexible tube with a small camera and light at the end of it to look inside the lower part of the bowel (the rectum and sigmoid colon). This means the bowel scope can find early stage cancers that aren’t yet causing any symptoms. And spotting bowel cancer at an early stage can make a big difference to surviving the disease.

As well as being able to detect bowel cancers at an early stage, bowel scope can also prevent the disease by finding polyps, small growths which if left untreated sometimes develop into bowel cancer.

The UK flexible sigmoidoscopy screening trial (UKFSST), which produced today’s new results, included people aged around 60 who had a one-off bowel scope screening test, and followed them up to see whether people receiving screening had different outcomes from those who didn’t have the test.

A study from the team behind today’s research had already shown that bowel scope has the potential to save thousands of lives. And although all screening has harms as well as benefits, the unequivocal importance of the UKFSST results led to a commitment from the Government in 2010 to add bowel scope to the NHS bowel screening programme in England.

Bowel scope is being rolled out as a one-off test at age 55, before people start to receive the at-home FOBt kits at age 60.

What’s new about these results?

Today’s research follows up the same group of people from the trial, but the researchers are now able to look at what effect bowel scope has had 17 years down the line.

It’s extraordinary – it’s the first time that this long term effect, for 17 years, has been shown

And the results are clear – the benefits of bowel scope have lasted.

As lead author Professor Wendy Atkin, based at Imperial College London, explains: “We see that the benefit of bowel scope screening has not diminished over time. It’s extraordinary – it’s the first time that this long term effect, for 17 years, has been shown.

Atkin says that based on the team’s 2010 results they knew “bowel scope was an incredibly effective screening tool”.

But 7 years on they believe the results are even more encouraging.

To put this in context that translates to roughly 2 fewer cases of bowel cancer and 1 death prevented from the disease for every 220 people screened.

Bowel scope is clearly effective at detecting and preventing bowel cancer. But not everyone who’s eligible is taking part.

This could be down to needing to take time off work for an appointment, for example. Or being worried about the test itself or thinking the test is not relevant for them. And, importantly, bowel scope is the new kid on the block when it comes to bowel screening, and the bowel screening programme itself has only been around for about 10 years.

The UKFSST began recruiting patients in 1994, but it wasn’t until 2010 that the team published results on bowel scope. And it was later that year that the Government committed to rolling it out. In 2013, the first invitations were sent out to eligible people in 6 small areas across England. But the roll-out process has been slow, so not everyone eligible to take part in bowel scope screening has had the opportunity to do so.

The Government has said that every screening centre in England should have started sending out invitations last year. But making a test like this available nationwide isn’t easy, and so it might not be on offer to all eligible people for a few more years.

A large part of the delay is that the NHS doesn’t have enough trained endoscopists to perform bowel scope screens, as well as all the endoscopies that are required for other reasons, such as those needed for people with symptoms which need further investigation. This growing demand for endoscopies is a point we’ve raised before.

Since 2015, a scheme has been underway to train 200 more endoscopists in England. Some of these new endoscopists might be hard at work already, but it’s important that there are enough newly trained specialists to meet the growing demand for these life-saving tests. 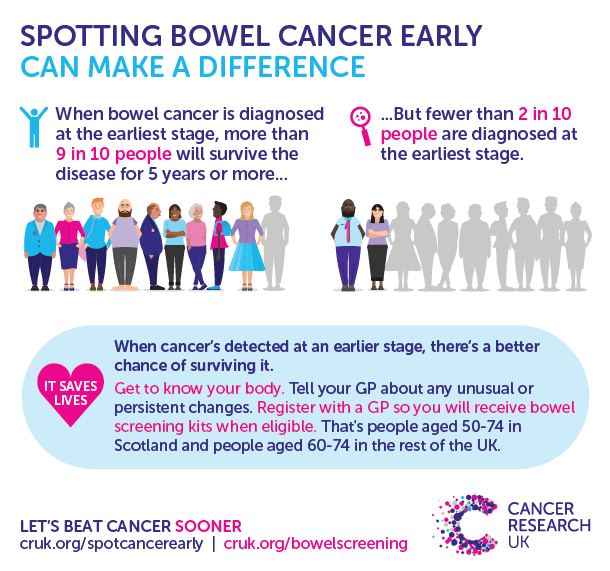 It’s also important to note that although bowel scope has been recommended by the National Screening Committee, the governments in other parts of the UK have not yet said that it will become part of their bowel screening programmes. We believe that every eligible person, regardless of where in the UK they live, should have access to the best possible bowel screening programme, including bowel scope as well as FIT – an even better test for at home screening.

Today’s research offers the clearest signal yet that bowel scope needs to be offered to all eligible people in the UK.

The Government in England has made its commitment. Now it’s up to the governments in Scotland, Wales and Northern Ireland to make theirs.

And for bowel scope to reach everyone who is eligible, those governments, and the NHS, must make sure there are enough endoscopists to carry out the tests, and that services can cope with demand.

Hi Emma,
Thanks for your question. Sorry to hear about your father. Bowel scope is being gradually rolled out across England, but it isn’t possible to request to be screened if you haven’t received an invitation. If you’re worried about your risk of bowel cancer we recommend you talk to your GP.
Best wishes,
Fiona, Cancer Research UK

Interesting, how do you get on the list? My father died aged 56 of bowel cancer, I’m coeliac and now aged 50