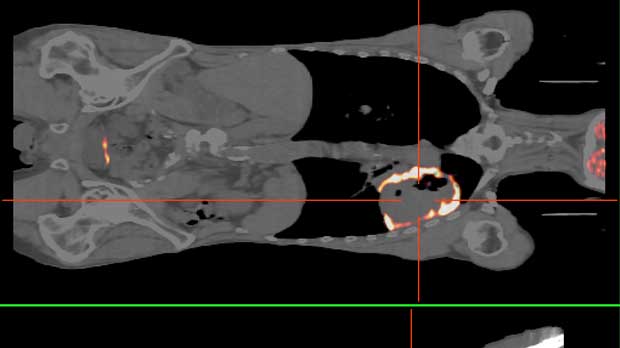 The Cambridge Science Festival is running until March 26, and scientists from the Cancer Research UK and EPSRC Imaging Centre – based in Cambridge and Manchester – will be on hand at an event on the final day to talk about the latest developments in cancer imaging. In a series of guest posts ahead of the event, our scientists explore what the future holds for 3 different ways to scan or take pictures of tumours. The final post in the series, from PhD student Victoria Tessyman, looks at PET imaging.

If you’ve ever broken a bone you’ll be more than familiar with an x-ray. Bones are easy to see on an x-ray because their high calcium content makes them denser than surrounding tissue. This isn’t the case for subtle changes in cells and tissues.

We face a similar challenge with CT scans, another routine imaging technique.

A CT scan produces a more detailed 3D image, allowing us to look at many different tissues and organs inside the body.

But it’s often tricky to pick out structures inside the body with CT, which can make diagnosing diseases using these scans difficult.

X-rays and CT scans can be used to detect and diagnose cancer by simply seeing that a tumour is there. But beyond seeing a physical mass of cells, the information that x-rays and CT scans give is limited. They can’t show how the tumour changes inside the body.

For example, we can’t tell based on these scans if tumour cells are fast-growing or if they are using more energy. So this limits how they can be used in choosing treatment or determining a patient’s outlook.

Towards a more accurate imaging method

For the last 50 years scientists have been developing new imaging methods that produce very detailed 3D images of what’s going on inside the body.

These imaging methods take advantage of key differences between cancer cells and normal tissue to help us see the cancer more clearly. The differences can be biological or physiological, but the key is that they capture an image of something that occurs more frequently (or only) in tumours.

The changes we can measure include blood flow, increased use of glucose to fuel growing cancer cells or changes in oxygen levels within the tumour. This information is key to aid diagnosis and to determine the most appropriate treatment; it tells us how the tumour is adapting and changing and allows us to tailor the treatments we are giving appropriately.

One of the ways we measure these changes is using Position Emission Tomography (PET). PET is a sensitive medical imaging technique that produces a 3D image of the processes that occur inside cells in our bodies. It does this by detecting a specific molecule that’s labelled with a small, safe amount of a radioactive material.

We call this a ‘tracer’, and it travels around the body where it collects in certain tissues depending on the biological process being investigated.

It’s the tracer’s radioactive signal that’s picked up by the PET scanner, showing differences between healthy and diseased tissue. This information is combined with a CT scan that provides a basic 3D map of the body, so the location of the tumour and changes in its biology can be seen together.

The most routinely used PET scan for cancer diagnosis uses a tracer called FDG (fluorodeoxyglucose). FDG scans are used to diagnose a wide range of cancers including breast, bowel, lung and brain tumours.

This approach exploits the fact that rapidly growing cancer cells hoover up glucose for energy at a faster rate than healthy cells. A small and safe amount of the radioactive tracer is injected into the patient where it travels around the body and collects in cells that are growing at a faster rate, which usually highlights the cancer cells.

The PET scanner detects energy signals given off by FDG and produces a 3D image that shows where the tracer has collected allowing us to see healthy and cancerous tissue. This patient’s lung cancer was not picked up using x-ray (right). By using FDG-PET combined with CT (left) we can see increased energy being used by cells indicating that a tumour is present in the lung. Credit: Wikimedia Commons/CC BY-SA 3.0

Why looking at changes in the tumour is important

To look at other biological changes that occur in tumours, scientists are developing new PET tracers that measure many different processes that help tumours grow and spread around the body.

Our lab focuses on using PET tracers that react differently depending on how much oxygen is in a tumour. If a tumour has low oxygen levels it’s considered to be oxygen deprived or ‘hypoxic’. Our tracers seek out these hypoxic regions.

Tumours with low oxygen are aggressive and are more resistant to treatments, including chemotherapy and radiotherapy. There’s also a greater risk of the disease spreading if the tumour is hypoxic.

But hypoxia might also be a weakness, as it’s becoming a key target for new cancer drugs. By visualising this phenomenon with a PET scan we think we can find the patients who may benefit from these emerging treatments.

How can we see tumour oxygen levels?

To do this we’re testing a tracer based around a hypoxia specific molecule called FAZA (fluoroazomycin arabinoside), which after injection becomes irreversibly trapped in areas of the tumour that have low oxygen levels.

The PET scanner measures the energy signals given off by the tracer. And from these measurements we can create a map that shows the oxygen levels as different colours.

This allows us to see which tumours have low oxygen levels and how severe this is.

We’ve been testing these scans alongside a drug that becomes activated under low oxygen conditions, killing cancer cells that are hypoxic.

We’re monitoring the response to the drug over time using FAZA PET scans in mice with lung cancer. And from the 3D images we can see areas of the tumour that contained hypoxic cells disappear during drug treatment, suggesting that these cells have been killed by the drug.

The remaining parts of the tumour have normal levels of oxygen and are more sensitive to standard chemotherapy or radiotherapy.

The areas of hypoxia within the tumour are reduced after drug treatment. Credit: Victoria Tessyman

We hope our work will lead to this new type of PET imaging being used in the clinic.

This may one day help doctors decide on the best treatment for their patients by suggesting if hypoxia-modifying drugs are needed or by increasing the radiotherapy dose.

It may also lead to new drugs that use hypoxia as a target in cancer treatment.