Every year, around 6,300 women in the UK are told they have a condition called ductal carcinoma in situ (DCIS).

In the US this figure sits at over 50,000 women, while in the Netherlands 2,500 women are given this diagnosis.

This information comes in spite of doctors knowing that not all women with DCIS will go on to develop cancer. What they don’t know, however, is how to tell the difference between cases that will develop into breast cancer and those that won’t.

Ultimately, this means that some women are having to choose to have treatment – surgery and maybe chemotherapy or radiotherapy – that may not benefit them. It also means they unnecessarily experience all of the side effects and emotional challenges like stress and anxiety that go with having treatment.

Dr Jelle Wesseling, senior group leader and consultant breast pathologist at the Netherlands Cancer Institute, and his team of 8 international scientists want to change this.

Through their Grand Challenge project – which is jointly funded by Cancer Research UK and the Dutch Cancer Society – they want to help doctors give women with DCIS a definitive answer on their individual risk of developing breast cancer. So they know, once and for all, if treatment is necessary.

‘First do no harm’ 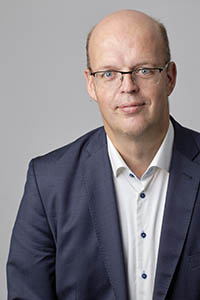 We need to find a way to make more precise predictions about this condition. – Dr Jelle Wesseling

Pledged by each newly trained doctor around the world, the fundamental message of the Hippocratic Oath is ‘first do no harm’.

But according to Wesseling, when it comes to treating DCIS, doctors can inadvertently do a lot of harm.

“Right now we cannot distinguish between the harmless cases of DCIS and the potentially hazardous ones. We don’t know which women should be treated and which ones shouldn’t, so we treat them all the same. The attitude is that it’s better to be safe than sorry,” he says.

Because of this, says Wesseling, thousands of women with DCIS around the world are being treated unnecessarily.

“I believe that the majority of DCIS cases will never progress to cancer. This means that every year, we treat a lot of women with this condition who do not benefit from it, but who still receive the harms that go with that treatment.

“They carry the harm of going to hospital, of having surgery, of having radiotherapy and the scars and marks that go with this. And they’ll have psychological anxiety and harm that comes with being told you have a pre-cancerous condition, when in actual fact they may never develop cancer.

“This needs to change. We need to find a way to make more precise predictions about this condition. To find a way to make a better estimate about a woman’s individual risk of developing cancer or not so that they can make the best decision for them.”

Someone who knows first-hand how it feels to be diagnosed with DCIS and the uncertainty that goes with it is Donna Pinto. Based in San Diego, she is one of the patient representatives involved in this Grand Challenge project and was diagnosed with low grade DCIS in January 2010.

“It was presented to me as being a pre-cancerous condition, stage 0 breast cancer,” she says. “My whole body just shut down.

“On top of that, I was told that even though it was pre-cancerous and might not ever become cancer, I should still have treatment ‘just to be safe’.

“And not just a little bit of treatment either – treatment very similar to that given to breast cancer patients. I was told I should have a partial or full mastectomy and 7 weeks of daily radiotherapy.

“I couldn’t believe it, it was all quite over whelming.”

Unsure whether or not she wanted to have this treatment when there was no guarantee it would benefit her, Donna did some digging.

After reading articles about the condition and talking to her doctors, she made the decision not to have treatment.

“It was a difficult decision to make because I felt like I was doing something wrong by going against medical advice,” she says. “But at the same time I knew I was doing what was right for me. Every woman is different, but I felt I was doing the right thing for me.” ‘Everything should be based on science’

Wesseling says that despite a lot of good quality research being carried out into DCIS, there are a couple of reasons why it’s still not possible to tell definitively if the condition will progress into cancer.

The first is the fact that almost all DCIS patients do decide to have treatment, meaning doctors don’t know much about the natural course of the disease.

“We do surgery and give women chemotherapy and radiotherapy so we never know what would happen naturally if DCIS was left alone and not treated,” says Wesseling.

The other reason is that all of the studies to date have been too small and haven’t followed what happens to patients in the long-term to be able to make conclusions.

To change this, Wesseling’s team plans to study tissue samples taken from women with DCIS during surgery in more detail than ever before. They’ll look at the characteristics of these samples, including their genetic make-up and the kinds of immune cells they contain.

The samples will come from the Netherlands, the UK and the US, which has been made possible through collaborations kick-started at a scientific conference and nurtured ever since.

And for all of these samples, they will have long-term follow-up information about the thousands of patients they hope to monitor. This information will include whether or not the patients’ DCIS came back after treatment, if they developed breast cancer, and if so, whether it spread. It has the potential to allow women with DCIS to make a more informed choice for themselves. – Donna Pinto, patient representative

Their ultimate goal is to combine this follow up information with the genetic data to find a particular change, or combination of changes, in the DNA that reliably reflects what happened to those patients.

If they find this change(s) in the DNA they’ll be a step closer to predicating how likely it is that a case of DCIS will, or won’t, later develop into breast cancer.

“Having access to this many samples with this much clinical information will allow us to study DCIS in a way that hasn’t been possible before,” explains Wesseling.

Once the team have identified potential genetic predictors, they will test them in larger clinical trials for women with DCIS.

They will also carry out experiments in the lab to understand more about the condition and how it develops and turns into cancer.

Their goal, according to Wesseling, is to develop a test to accurately and reliably tell women with DCIS if they need treatment or not.

Pinto, for one, can’t wait to see what they discover.

“When it comes to medicine, everything should be based on science. That’s what drives doctors, surgeons and nurses, and those are the people that patients listen to,” she says.

“But at the moment, there are a lot of holes in the evidence surrounding DCIS. And this means that doctors have to err on the side of caution and advise women to have treatment, even though there’s no strong evidence to show it will benefit them and we know it can harm them.”

To give treatment or not might seem like straightforward question. But finding an answer in the case of DCIS isn’t easy. Despite a lot of quality research being done into DCIS, women with the condition are still being over treated.

When explaining why he thinks this is the case, and why a project like this hasn’t been done before, Wesseling says there hasn’t been “the funding or the incentive to do it”.

So when the Grand Challenge award came along, he saw it as a chance to bring leading DCIS scientists and doctors together, and get answers once and for all.

“I approached people who had a good track record – experts at the top of their respective fields,” he says.

“I was upfront with everyone and told them that the ultimate goal of this project isn’t about publishing papers and furthering careers. It’s about changing how things are done and improving things for women with DCIS.

“That’s because for me, being a doctor isn’t just about taking care of the person in front of you today – it’s about thinking on a daily basis about how you can do things better for the next patient the next day.

Thankfully, everyone Wesseling approached – including Pinto and the other 5 patient representatives who are part of their project – were happy to be involved.

“I’m so excited to be involved in this project and to share my experiences of having DCIS with the scientific community,” says Pinto. “It has the potential to allow women with DCIS to make a more informed choice for themselves. And if it helps just one woman do that, it’ll be worthwhile.”

Wesseling’s team haven’t got an easy task ahead of them, but he’s confident they can do it.

“Changing clinical practice takes time – it’s like changing the direction of a big oil ship. With the Grand Challenge project we’ve got 5 years to make this happen and change the DCIS ship’s direction.

“It’s a daunting task, but I know that we have put the best team together and that if we can’t do it then nobody can.”

I live in the United States and they just did a biopsy on me. They are telling me I need surgery for stage zero cancer! I will not let them. American health care is for profit. My health is more important to me. I am 51 and in good health, eat right, and maintain my weight. IF IT IS NOT BROKE, DO NOT FIX IT!

The treatment for breast cancer patient must be specific to the condition of the patient, their age, cancer stage, and all other important factors. since, the impact of the treatment might affect the patient accordingly. My mother was diagnosed with breast cancer stage 2, and was suggested for radiation therapy Bronx ( http://www.advancedradiationcenters.com/cancers/breast-cancer/ ) for her treatment. I read an article recently, related with common treatment options for cancer according to the stage diagnosed at

Sine if you pick up tnis comment I may have some useful info for the study.