Professor Jack Cuzick: ‘Sitting on the borders between maths and cancer medicine’ Professor Jack Cuzick from Queen Mary University of London has received the Cancer Research UK Lifetime Achievement Award for his work on cancer prevention and detection. This prestigious prize is awarded annually to an outstanding researcher who has demonstrated a lifetime commitment to the fight against cancer and has made exceptional advances in the field.

The award will be presented at the 2017 National Cancer Research Institute (NCRI) Cancer Conference in Liverpool, and will celebrate an exceptional career that’s spanned more than 30 years. Cuzick will give a talk, headlining the busy conference and summing up his area of research during his career.

We caught up with Cuzick to talk about his interesting career path, the people who have influenced him the most, his biggest achievements and….motorbikes?

As soon as we mention the Lifetime Achievement award, a grin appears on Cuzick’s face.

“I am really delighted. On a personal note it tops off a great couple of years of scientific recognition for me – I was recently made a Fellow of the Royal Society and a Commander of the British Empire too.

“I’m pleased personally of course, but it’s also really important for our field, because cancer prevention tends not to get the recognition that it should,” he says.

Cuzick thinks that more needs to be done to raise the profile of cancer prevention as an important field of scientific research, and winning this award will help to do that.

“As an example,” he says, “taking statins to lower the risk of heart attacks is standard and routine for people of a certain age – doctors don’t think twice about prescribing them. Yet giving people drugs to prevent cancer isn’t common practice.”

Cuzick’s knowledge of cancer screening and prevention is thorough and wide-reaching, yet it wasn’t always his primary interest. For that, we need to go back to London in the 70s, and a slightly wilder young man than the Professor sitting before us now.

A rebel with a cause

Cuzick grew up in Los Angeles with a passion for maths. And it was this love of numeracy that took him to London, where he did a masters at the University of London.

“I grew up with a real ‘LA mentality’”, he says, “I was into baseball, surfing and motorbikes, and when I moved to London I got a Norton Commando bike and spent my free time touring London, the countryside and even as far as southern Turkey. There I was, clad in full leather kit with hair down to my shoulders and a long ‘Fu Manchu’ moustache. My mother hated that moustache…” Just by chance, through a shared love of motorbikes, he met another young statistician called Richard Peto. This friendship was set to shape the course of Cuzick’s career.

After his masters studies finished he sold the motorbike and headed back to the US. His first job was at New York’s Columbia University, developing ways to use maths to help analyse clinical trials, among other things.

“I really wanted to understand more about clinical trials and how they worked. But back in the 70s, the atmosphere in Columbia University was different; unless you had a medical degree, you were consigned to number-crunching and couldn’t take a more active part in clinical research.”

So Cuzick got in touch with his buddy Peto, who was now the co-Director of the Clinical Trial Services Unit in Oxford, and successfully got a grant from IARC to return to the UK for a couple of years to become more involved in clinical research.

And that’s where Cuzick discovered his passion for applying his mathematical background to the practical, real-life problems that doctors encounter in the clinic.

“I liked learning about science but with my numerical hat on. Harold zur Hausen discovered the links between the Human Papilloma Virus (HPV) and cervical cancer, but the way my brain works focused on how to use this discovery and make it clinically useful – hence my research into cervical screening that followed.”

Despite being given a return ticket which he has kept “as a souvenir”, Cuzick remained in Oxford until another close colleague, famous epidemiologist Sir Richard Doll, retired, at which point he was given the opportunity to set up his own research group at our predecessor the Imperial Cancer Research Fund’s labs at Lincoln’s Inn Fields in London. The labs were back then under the directorship of Sir Walter Bodmer.

Cuzick describes his research as “sitting on the borders between maths and cancer medicine, and it’s these borders where I think the most fertile ground for science is.” 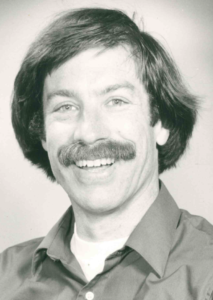 Cuzick, 1980, when he was in Oxford learning more about clinical trials with Richard Peto.

While Cuzick’s research has always centred on cancer screening and prevention, it’s taken him and his team down many varied scientific paths over the years. As perhaps expected, when we asked about career highlights, the hard part was keeping to just a few.

“For me, one of our biggest achievements was the IBIS I study, which showed tamoxifen helps to prevent breast cancer in women at high risk from the disease. This was a true milestone.”

“What I still find fascinating is the length of the protective effect: a woman taking tamoxifen for 5 years will lower her risk of breast cancer for as long as 20 years, even after she’s stopped taking it.”

Casting his mind back, Cuzick describes just how much things have changed when it comes to breast cancer. One of the earliest studies he was involved in was studying the long term side effects of radiotherapy for breast cancer.

“The way radiotherapy used to be given could damage a woman’s heart, increasing her risk of developing heart disease later in life. Finding this out led to major changes in the way radiotherapy is given. Now these women are no more likely to suffer heart problems than women who haven’t had radiotherapy.”

And Cuzick played a central role in the large, international clinical trials that proved aromatase inhibitors were more effective than tamoxifen in post-menopausal women, both as a breast cancer treatment and in helping to prevent the disease.

The other area he’s proud of is the work his team carried out in cervical screening.

“Back in the mid-80s we led the recommendation to the government for setting up an organised programme with a call and re-call system, and that led to the national cervical screening programme which has saved thousands of lives.

“Then we played a big role in the clinical studies that provided evidence for switching the order of testing to analyse cervical screening samples – carrying out HPV testing before cytology spotted more cases that needed further investigation. I remember when we released the results of the trial people would ask me how long it would be until front-line HPV testing was routine and I used to answer ‘2006’. I was only a decade out! But finally, we’re getting there.”

Cuzick is chuffed with the honour of getting our Lifetime Achievement Award, but in his note of thanks to our CEO, Sir Harpal Kumar, he was keen to emphasise that he’s not close to retiring yet.

“There’s research we’re still doing that I hope will make a big impact for patients in my lifetime,” says Cuzick. Professor Jack Cuzick “There’s research we’re still doing that I hope will make a big impact for patients in my lifetime.”

One area he thinks will change is screening for prostate cancer. At the moment there’s no national screening programme in the UK, in part because the only available tests also find many slow growing cancers that won’t cause any harm even if not treated (more here).

“One thing we really need is a test that can identify indolent versus aggressive prostate cancers, so we know which men to treat and which to monitor.

“A test we’ve worked on has been commercialised and is being widely used in the United States and currently under review by NICE, so we’ll be keenly watching its progress.”

The other topic that Cuzick is anticipating will evolve in the coming years is the use of aspirin to help prevent bowel, stomach, oesophageal and potentially some other cancers. “There’s already strong evidence that it reduces the risk of bowel cancer,” Cuzick says, “and the benefits appear to outweigh the side effects for most people aged 50 to 70, but there’s still lots to do to more accurately identify who will benefit most.” (As discussed here).

“There are lots of challenges around it, but it’s something I’m looking forward to working more on in the future. At the basic level we don’t understand biologically how aspirin prevents cancer – what molecules it acts on to stop cancer starting, so there’s lots more research needs doing.”

As time ticked on and the conversation kept flowing, it became clear that much like one of his prized motorbikes, Cuzick has many more research miles left in the tank. And he has plenty more ideas how we can make progress when it comes to cancer screening and prevention.

An exceptional award to recognise the career of an outstanding cancer researcher – congratulations from us all, Professor Cuzick.

Remembering Jack with fondness from HMC where his strong character both reflected and shaped the early HMC experience; happy and impressed with his success and contribution..

Hi Emma.Good article.Pancreatic cancer is always called “silent cancer”.Yesterday I’ve read an article about tumor survival rates. According to the article,the general 5-year survival rate for people with pancreatic cancers; who did not have their tumors removed is about 16%.So it means you have only 16% to live?