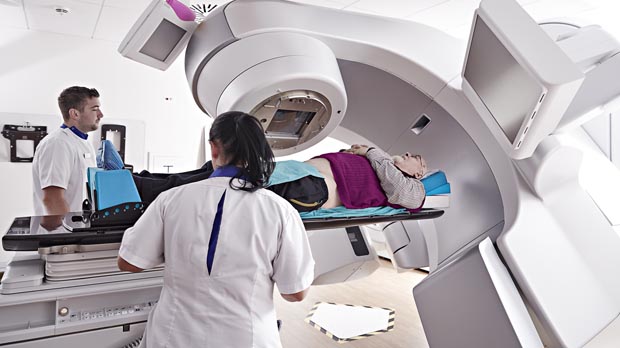 This entry is part 8 of 11 in the series Radiotherapy

Part eight of our radiotherapy series explores how the NHS gets radiotherapy to patients. Right now, some cancer patients are missing out on modern radiotherapy. A new NHS England plan could change that.

Each of the UK nations manages the way it gives radiotherapy to patients differently.

In England, 52 radiotherapy centres provide radiotherapy for all cancer patients. A new NHS England plan wants to change how radiotherapy is provided across the country. And while the number of centres won’t change, services will be organised into 11 networks that manage specific areas.

Important investment in radiotherapy has happened in the last few years, and positive changes have followed.

But recent data shows that some patients still aren’t being treated with best type of radiotherapy for their cancer. That’s what has prompted the rethink from NHS England. And we offered our thoughts on the plans as part of a consultation that closed last week. Here’s what we said.

Are cancer patients getting the radiotherapy they need?

Half of people having radiotherapy to cure their cancer should be treated with a modern treatment called intensity modulated radiotherapy (IMRT), according to estimates. But recent data shows this target is being missed.

Modern radiotherapy gives some patients a chance of survival where there had been little hope before, such as for those with lung cancer where treatment options can be limited. For others, these new types of radiotherapy can mean fewer long-term side effects.

But a few years ago, patients in England were among the least likely to receive IMRT in Western Europe, with under 7% of patients who may benefit from the treatment getting it between 2011 and 2012.

We ran a campaign in 2012 to raise awareness of this issue. And government listened. This led to the launch of a £23m Radiotherapy Innovation Fund, which had a dramatic effect so that more patients could be treated with IMRT.

Access is now at 44% on average in England. But there’s still wide variation across the country.

Some radiotherapy centres treat just 23% of their radiotherapy patients with IMRT, whereas others reach a high of 69%.

We don’t know what’s causing this variation, but it paints a worrying picture of inconsistency across the NHS in England.

No radiotherapy services will close because of these plans, but it does involves concentrating specialist radiotherapy into dedicated centres, so the small number of people who need complex radiotherapy will be given it using the best equipment by people experienced at doing so. At the same time, this would allow other hospitals to focus on treating more common types of cancer with modern radiotherapy – so everyone should benefit.

We’ve heard some concerns that the NHS will close radiotherapy centres because of this plan. This isn’t the case, but it will affect which centres can treat certain types of cancer. This is so that each network can make sure all their patients get the same high-quality radiotherapy, no matter where they live.

NHS England also says the plans will lead to more patients taking part in clinical trials. Research is the key to improving survival and quality of life for patients, so this is hugely important.

Is this a good idea?

Overall, yes. But there are some complexities.

For most people, these plans won’t change where they have their treatment, as services are already mostly organised in this way.

But some patients aren’t receiving the high-quality treatment they need to give them the best chance of a cure.

So these proposals are good, because they should make sure that all people having radiotherapy are getting the best type of treatment.

In the future, and for a small minority of patients, this could mean having to travel further than they would now for specialist treatment. This will be to a hospital with the right equipment and expert staff to treat their cancer most effectively, so the hope is that the travel will be worth it.

Once the networks are set up, they will have to plan their services carefully, and work closely with people affected by cancer as they do this. Another task will be limiting the amount people must travel for treatment, for example by planning treatment in a specialist hospital before it’s then given at a hospital closer to home.

What do patients think?

As part of our response, we ran a survey for people affected by cancer. We found that 72% would travel further to get the best quality treatment.

To provide the highest technical standards and have the best people working together it helps to have them in one establishment. It would be lovely if it was on our doorstep but it cannot be on every doorstep. The important thing is that transport is easy to the hospital and things like parking are taken care of, which are often not the case

But many patients said that having radiotherapy can be very tiring. So we also asked how the NHS could support those having to travel, for example through free parking or allowing people to book all their appointments in advance. The bottom line is that every patient having radiotherapy must get the support they need throughout their treatment – whether that’s close to home or further afield.

Overall, we think these proposals are a good idea. Now NHS England – and the new Radiotherapy Networks – must find a way to make these plans work for patients. 87% of people in our survey said it’s important that patients are involved in these decisions, and we agree.

The system should work for the person with cancer, not the other way round

But for these plans to work, it’s critical that the networks have IT systems that can talk to each other. This is so that doctors can work together, even when they’re based at different hospitals, to make each person’s individual treatment plan together.

But money is short in the NHS. And hospitals haven’t been able to invest in new radiotherapy machines or up-to-date IT software.

NHS England committed an additional £130m in 2016 to replace out-of-date radiotherapy machines, which was much-needed. But this hasn’t helped with IT software. We want NHS England to support Radiotherapy Networks to upgrade software, so that they can fulfil these ambitious proposals.

A long-term fix is needed

In 5-10 years, the new radiotherapy machines could be out of date and will all need replacing again. There are loads of exciting new types of radiotherapy being studied in labs and in clinical trials, so we need to make sure the NHS can get them to patients as quickly as possible. To keep these services sustainable, NHS England must find a way to regularly upgrade both the machines and the software, rather than having to give big one-off payments every few years.

We’ve also recently been campaigning about the major shortages in the staff who diagnose cancer in the NHS. But shortages are also being felt among staff who give radiotherapy. Nearly 3 in 4 people responding to our recent survey of people who treat cancer felt that staff shortages were stopping them giving the best treatment and excellent patient experience.

We’re hoping that Health Education England will address this as part of the next phase of its cancer workforce plan.

While we support NHS England’s new radiotherapy plans, they won’t work if the NHS doesn’t have enough resources, or the right staff, to carry them out. And it’s cancer patients who would feel the effects of this most.

I’m a radiotherapy radiographer (one of those who give radiotherapy). The recent removal of free training has already had an mpact on recruitment of students, and this will cause major problems down the line. I’m due to retire this year and the number of students in training is not enough to replace me and all the others leaving in the near future. The other issue is that advanced radiotherapy treatment delivery demands experienced physics staff. They ensure accuracy and consistency of treatment delivery, without them there can be no advance in treatment delivery. The powers that be need to look at all the resources needed to deliver state of the art treatments.