Lung cancer screening part 1: the benefits and harms according to clinical trials 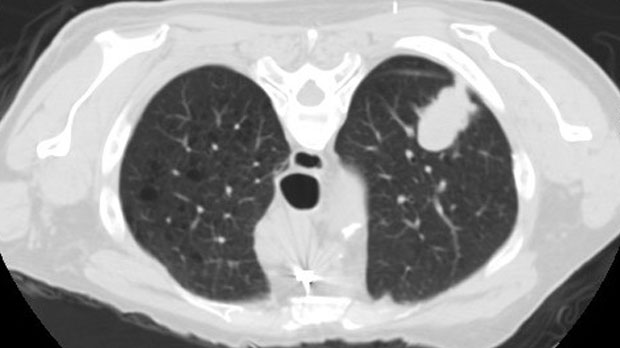 This post was updated in January 2020 to add new NELSON trial results.

Beating lung cancer remains one of our biggest challenges. With more than 35,000 lives lost to the disease every year, it’s the most common cause of cancer death in the UK.

Survival from lung cancer remains stubbornly low. And one reason for this is that people are often diagnosed at a late stage, when there are few curative treatment options available.

In part one of this two-part series, we’ll fill you in on the story of lung cancer screening and some of the big unanswered questions.

A history of lung cancer screening

Doctors first started researching the use of chest x-rays to find early lung tumours in groups of men in the 1950s. But trials carried out both in the UK and the US produced disappointing results – giving men regular chest x-rays didn’t reduce the number of lung cancer deaths.

Lung cancer screening was put on the backburner.

In 1977 the first study of computed tomography (CT) scans to look for lung cancer was published. The computing power combined with x-rays meant doctors could see the lungs in more detail than before. But this came with a big downside – the amount of radiation people are exposed to in a CT scan is much higher than traditional chest x-rays.

Again, technology improved to help overcome this problem. In 1996, researchers showed that newer CT scanners, which give off a lower radiation dose, were just as good at detecting small abnormalities, which could be lung cancer, as older machines.

Several clinical trials were carried out to see if offering regular scans to certain people with no symptoms of lung cancer could find more cases at an early stage, when they are more likely to be treated successfully.

But the number of people who get lung cancer is relatively small compared to the number who don’t. This is even true for those at higher risk, such as smokers. So many thousands of people need to be screened to get robust evidence that screening decreases the number of people dying from the disease. And the early attempts at clinical trials were too small to provide a definite answer.

The need to go big: a large trial opens

In 2002 an ambitious trial, called the National Lung Screening Trial (NLST), opened in the US to build a clearer picture.

The trial involved more than 53,000 people at high risk from lung cancer – that’s people over 50 who had smoked heavily over a long period. They were screened annually for 3 years, using either a chest x-ray or the low radiation dose CT scan.

The results showed around a 20% reduction in the number of lung cancer deaths in the group monitored with the low dose CT scans compared to x-rays – we blogged about it when the results were released back in 2011. More cancers were diagnosed at the earliest stage using low dose CT, and one death from lung cancer was averted for every 330 people screened with low dose CT compared to an x-ray. But the trial left several points unaddressed.

Many other smaller European lung screening studies have been carried out since the publication of the US trial. This includes the UK Lung Screening Trial (UKLST) and the second largest lung screening trial to date, the NELSON trial (based in Belgium and Holland).

Like the US trial, both European studies included people aged 50-74 who were long-term, heavy current or former smokers. But the European trials also included a group who had no screening as a comparison. Those who did get screening were tested just once (UKLST) or multiple times at varying intervals ranging from 1 to 2.5 years (NELSON).

The two trials ask a few other important questions about screening.

Results from the UK Lung Screening Trial showed that around 85% of the lung cancers picked up through screening were early stage. But as a pilot – with 2027 people receiving a CT scan and 2028 people receiving no screening – the study wasn’t large enough to tell if lung screening reduces the number of people dying from lung cancer.

The UKLST researchers have speculated that adopting a ‘watch and wait’ approach for low risk nodules might reduce false positives and overdiganosis of lung cancer. More research will uncover if this is the case.

Full results of the NELSON trial, which included more than 15,000 people, were published in the New England Journal of Medicine in January 2020. It showed that offering men at high risk of lung cancer low-dose CT scans reduced lung cancer deaths by 24% after 10 years. The trial didn’t include many women, so the reduction in female lung cancer deaths was less certain, although still promising.

These long awaited results confirm that offering men at high risk of lung cancer low-dose CT scans can save lives from the disease.

If it saves lives, what are the downsides?

Research has shown that not all lung cancers need treating. Some grow quickly and need to be treated urgently, while others grow very slowly without causing any harm. They may even disappear completely thanks to our immune system.

We don’t yet fully understand the biology of lung cancer and how it develops, so doctors can’t reliably tell the slow growing harmless tumours from the aggressive, life-threatening ones.

Screening will likely result in doctors treating people who didn’t need treatment, which means some people having unnecessary surgery, radiotherapy and chemotherapy. And they will also face the physical and psychological side effects that come with this diagnosis and treatment.

Other harms of screening include spotting something that turns out not to be cancer (false positives), which can result in further scans, potentially invasive biopsies, surgery, as well as unnecessary distress. Screening also exposes people to radiation. And even though modern CT scanners give out lower levels of radiation, it still increases the risk of developing cancer in the future.

The results of the NELSON trial have suggested there was a favourable balance of benefits and harms. After 10 years, there was around a 20% excess of new lung cancer cases (i.e. cancers that may have been overdiagnosed) in the screening group, but this decreased to around 9% by 11 years.

The researchers also reported some data on false positives and negatives, but a bit more information is needed to get the full picture. Researchers will also need to unpick how all the results on both benefits and harms might translate to a UK population.

Weighing up the benefits and harms is hugely complicated, and the only way to fully understand the pros and cons is through years of research and pooling together the results of large clinical trials to determine what a lung screening programme might look like in the UK.

The combined weight of data from the NELSON trial and its UK counterpart could be enough to settle the discussions on lung screening.

But the decision on whether certain groups of people in the UK should be offered lung screening in the form of CT scans falls to the National Screening Committee.

It has the difficult task of weighing up all the pros and cons to come up with a recommendation. Together with experts from the field, it needs to work out if lung screening would overall do more good than harm, while also being cost-effective for the NHS. If so, it would then work out details, like the age at which screening might be offered, who it should be offered to and how often scans should be done.

Researchers are looking for improvements

In the meantime, researchers are continuing to test screening in studies. In some cases, this involves an assessment of someone’s risk of developing lung cancer in the future, based on lifestyle information and then further investigations for those judged at certain levels of risk. In parts of England, some people are being offered a lung health assessment, followed by a low dose CT scan in some cases, as part of NHS projects trying to address poor lung cancer survival. And the UK’s latest, and largest, lung cancer screening study has just been announced by University College London Hospitals NHS Foundation Trust (UCLH) and UCL.

If you’ve been offered the opportunity to have a low dose CT scan as part of these projects, it’s important to remember that having tests when you don’t have symptoms of a disease comes with both harms and benefits. You can speak to your doctor or other health professionals for advice, as well as making sure you read all the information that comes with the invitation.

Together this paints a complicated picture. There isn’t a national lung screening programme available in the UK, but there’s appetite from doctors and the NHS to run studies and introduce initiatives that look a lot like screening.

To help reach a consensus on how this type of activity should proceed, we ran an expert workshop in March with representatives from the National Screening Committee, NHS England and senior doctors and researchers. It was agreed that robust, evidence-led guidelines should be developed for the NHS projects, so that the way the projects are carried out, and they data they collect, are consistent.

While researchers and the National Screening Committee are still looking at the results from lung screening studies and gathering more evidence, science never stops. Researchers across the world are finding ways to improve CT scans as a screening test and looking for new ways to try and save lives from lung cancer.

Could other tests that don’t use radiation be as good, or better, than CT scans at detecting lung cancers earlier? Are there more reliable ways to tell which cancers need treating versus cancers or small growths that won’t cause any harm?

We’ll discuss that and more in part two of this series, looking at the latest research into detection technology that could make a big impact on lung cancer.

I have just been so very lucky . My doctor for a reason even he doesn’t understand sent me for a chest x-ray when I went for one on my knee … I was found to have a lung cancer , a very early one . No cough or any other symptoms . That was October 2nd , many tests in the next couple of weeks and an operation to remove part of my lung on November 20th . Follow up appointment December 13th and all the cancer has gone and I do not need any other treatment … I think that must be one of the quickest cancers to come and go EVER … I am so fortunate . I do not need to go back until March … I have sent £50 to research instead of Christmas cards . I do wish everyone could have a chest x-ray just to check as it would save so much heartbreak of a later diagnosis .. Keep up the good work .