‘Game-changing’ myeloma drug combo approved for NHS use in England 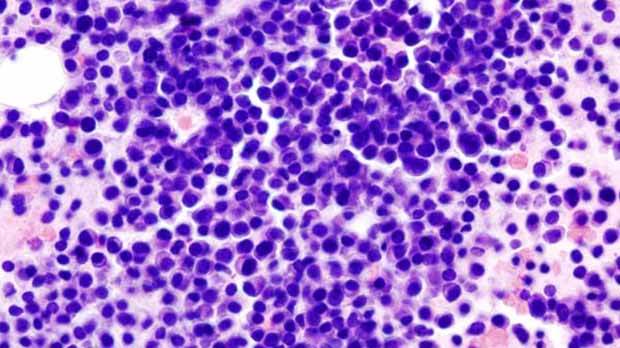 A new treatment for people with multiple myeloma will now be available on the NHS in England.

Daratumumab (Darzalex) was approved by the National Institute of Health and Care Excellence (NICE) in combination with two other drugs, bortezomib (Velcade) and dexamethasone, after the treatment was found to extend the time that patients lived without their cancer getting worse.

The combination will be paid for through the Cancer Drugs Fund. And will be an option for patients whose myeloma has got worse or come back after their first round of treatment.

She said: “This drug combination has shown great benefits for some patients in clinical trials, substantially increasing the time patients have before their cancer gets worse.

“NICE has said its not yet sure how much this treatment will extend patients’ lives, but by recommending it for the Cancer Drugs Fund, patients will have access to it while more data is collected on its long-term benefits.

“It’s great that NHS England, NICE and the company have worked together to reach this deal for patients.”

5,700 people are diagnosed with myeloma each year in the UK.

Daratumumab targets a molecule on the surface of myeloma cells. It was initially rejected by NICE for this group of patients in July last year due to uncertainty around the long-term benefits of the drug.

In a trial involving 498 patients, adding daratumumab to bortezomib and dexamethasone significantly extended the time the patient lived with their cancer without it getting worse.

61 in 100 patients treated with the combination were alive for 1 year without their cancer getting worse, compared to 27 in 100 of those taking bortezomib and dexamethasone alone.

The improvements in progression-free survival were called “game-changing” by patients and clinical experts who submitted evidence to NICE.

NICE also concluded adding daratumumab would likely extend survival in this group of patients compared to bortezomib and dexamethasone alone. However it stated there wasn’t enough data on the long-term benefits of the treatment to be sure how big this effect would be

But adding daratumumab to the combination also increased side effects, causing low levels of platelets in the blood and reactions to the drug at the site where it’s administered.