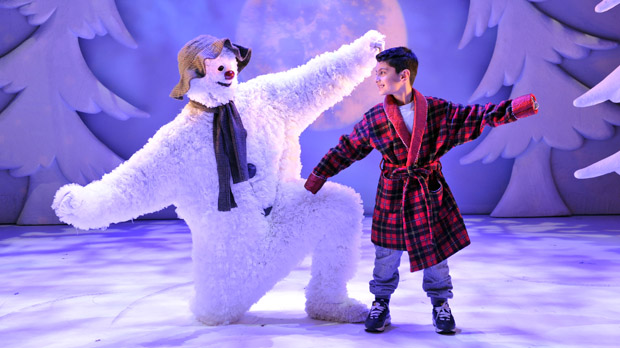 Six-year-old cancer survivor, Karos Rasoul, from Clapham in London, got an unforgettable Christmas treat this week when he got the chance to meet some of the cast from Birmingham Repertory Theatre’s annual festive production of The Snowman and re-enact some of the iconic scenes on stage at The Peacock, Sadler’s Wells’ West End theatre, in London.

“It was so much fun to meet the Snowman and get to be on stage. I loved going in the motorbike and even got my own present! I can’t wait until Christmas!” – Karos

The heart-warming moment was arranged to mark the launch of this year’s Cancer Research UK for Children & Young People Star Awards, supported by TK Maxx, which celebrate the courage of children aged up to 18 who have been diagnosed with cancer.

Karos was diagnosed with a type of kidney cancer called Wilms’ tumour when he was just two years old and as a result, Christmas was disrupted two years in a row as he was too sick to enjoy it properly and join in on the festive fun. So, it was an extra special treat for Karos this year to be given exclusive access to the stage after watching the show where he met the Snowman, the Boy, Father Christmas and the Ice Princess from the 22nd annual production of the much-loved Christmas story, which is currently playing at London’s Peacock Theatre until 5 January.

A previous Star Award winner himself, Karos fully embraced the Christmas spirit, hugging the Snowman, donning the boy’s dressing gown and getting a little present himself. Re-enacting some of the show’s iconic scenes, he even got to have a special ride alongside the Snowman in the famous yellow motorbike and side car.

When he was two years old, Karos suddenly became very ill. He was sweating, vomiting and had an extremely high temperature so his parents took him to the doctors. Tests revealed that Karos had a huge tumour on his left kidney, taking up almost half of his stomach. The following day, Karos was diagnosed with Wilms’ tumour, and his parents were told the cancer had also spread to his lungs. He spent the first few years of his life going through intensive cancer treatment, including surgery to remove one of his kidneys and chemotherapy.

During his treatment, Karos and his family were forced to miss Christmas so now the festive season has a whole new meaning for them, especially now that Karos is healthy and doing well.

Karos said: “It was so much fun to meet the Snowman and get to be on stage. I loved going in the motorbike and even got my own present! I can’t wait until Christmas!”

Fermisk Mustafa, Karos’ mum, said: “Christmas really did come early for us today. It was so wonderful to spend time with Karos and see him so happy and full of energy, after all that he’s been through – he really is an inspiration to the whole family.”

“I remember the day Karos was diagnosed like it was yesterday. The hardest part was watching him in pain and being unable to help. The nurses and consultants were absolutely amazing – without these people, my son wouldn’t be here today. Christmas has been tough in the past with Karos being so poorly and in and out of hospital, so today was even more special. After everything we’ve been through, it’s moments like today that we treasure forever.”

Cast member Emanuela Atzeni who plays the Ice Princess in The Snowman, said: “It was absolutely amazing to meet Karos today – he is such a character – I think he should definitely consider a career on the stage one day! He has been through so much and has been so brave, I can’t think of anyone more deserving of a Star Award.”

Nominations for the Star Awards are now open and Cancer Research UK for Children & Young People is calling upon families of young cancer patients and survivors from across the UK to nominate them in the run up to Christmas.

Every child who is nominated receives a unique trophy, a £50 TK Maxx gift card, a t-shirt and a certificate signed by celebrities supporting the campaign. Their siblings also receive a certificate.

The Cancer Research UK for Children & Young People Star Awards are supported by TK Maxx, the biggest corporate supporter of Cancer Research UK’s research into children’s and young people’s cancers. Since the partnership began, TK Maxx has raised over £34 million for the research into these cancers to ensure more children and young people survive cancer.

To nominate a child to receive a Star Award, or to find out more about Cancer Research UK for Children & Young People, visit cruk.org/childrenandyoungpeople

Birmingham Repertory Theatre’s The Snowman is running at The Peacock until 5 January.