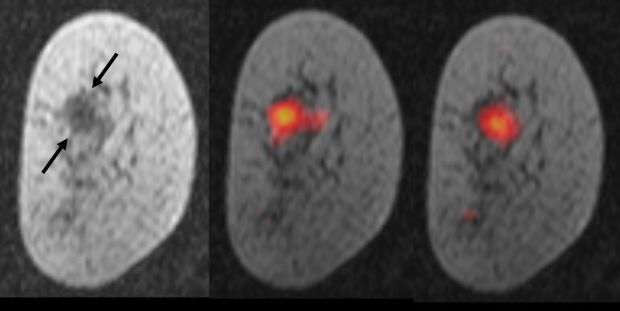 A new type of scan that involves magnetising molecules allows doctors to see in real-time which regions of a breast tumour are active, according to research funded by Cancer Research UK* and published in Proceedings of the National Academy of Sciences today (Monday).

“This is one of the most detailed pictures of the metabolism of a patient’s breast cancer that we’ve ever been able to achieve. It’s like we can see the tumour ‘breathing’”. – Professor Kevin Brindle

This is the first time researchers have demonstrated that this scanning technique, called carbon-13 hyperpolarised imaging, can be used to monitor breast cancer.

The team based at the Cancer Research UK Cambridge Institute and the Department of Radiology, University of Cambridge, tested the technique in seven patients from Addenbrooke’s Hospital with various types and grades of breast cancer** before they had received any treatment.

They used the scan to measure how fast the patients’ tumours were metabolising a naturally occurring molecule called pyruvate, and were able to detect differences in the size, type and grade of tumours – a measure of how fast growing, or aggressive the cancer is.

The scan also revealed in more detail the ‘topography’ of the tumour, detecting variations in metabolism between different regions of the same tumour.

Professor Kevin Brindle, lead researcher from the Cancer Research UK Cambridge Institute, said: “This is one of the most detailed pictures of the metabolism of a patient’s breast cancer that we’ve ever been able to achieve. It’s like we can see the tumour ‘breathing’.

“Combining this with advances in genetic testing, this scan could in the future allow doctors to better tailor treatments to each individual, and detect whether patients are responding to treatments, like chemotherapy, earlier than is currently possible”.

Hyperpolarised carbon-13 pyruvate is an isotope-labelled form of the molecule that is slightly heavier than the naturally occurring pyruvate which is formed in our bodies from the breakdown of glucose and other sugars.

In the study, the scientists ‘hyperpolarised’, or magnetised, carbon-13 pyruvate by cooling it to about one degree above absolute zero (-272°C) and exposing it to extremely strong magnetic fields and microwave radiation. The frozen material was then thawed and dissolved into an injectable solution.

Patients were injected with the solution and then received an MRI scan at Addenbrooke’s Hospital. Magnetising the carbon-13 pyruvate molecules increases the signal strength by 10,000 times so that they are visible on the scan.

The researchers used the scan to measure how fast pyruvate was being converted into a substance called lactate.

Our cells convert pyruvate into lactate as part of the metabolic processes that produce energy and the building blocks for making new cells. Tumours have a different metabolism to healthy cells, and so produce lactate more quickly. This rate also varies between tumours, and between different regions of the same tumour.

The researchers showed that monitoring this conversion in real-time could be used to infer the type and aggressiveness of the breast cancer.

The team now hopes to trial this scan in larger groups of patients, to see if it can be reliably used to inform treatment decisions in hospitals.

Breast cancer is the most common type of cancer in the UK, with around 55,000 new cases each year. 80% of people with breast cancer survive for 10 years or more, however for some subtypes, survival is much lower.

Professor Charles Swanton, Cancer Research UK’s chief clinician, said: “This exciting advance in scanning technology could provide new information about the metabolic status of each patient’s tumour upon diagnosis, which could help doctors to identify the best course of treatment.

“And the simple, non-invasive scan could be repeated periodically during treatment, providing an indication of whether the treatment is working. Ultimately, the hope is that scans like this could help doctors decide to switch to a more intensive treatment if needed, or even reduce the treatment dose, sparing people unnecessary side effects”.