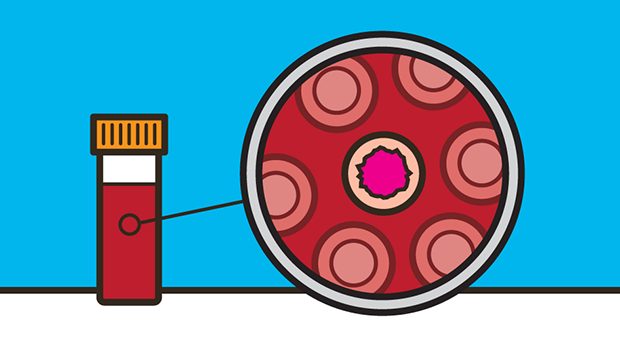 Scientists are working to develop a blood test that picks up microbial signatures indicative of cancer.

Picking up microbial cancer clues in the blood

When it comes to detecting cancer in the blood, most researchers have focused on hunting for tumour DNA. But researchers in the US are taking a different approach – searching for clues left by tiny microbes that can grow within a tumour. And while it’s still early days, they’ve discovered it’s possible to identify some cancers by searching for microbial DNA ‘signatures’ in the blood. Experts say the next step is to test the theory on a much larger group of people. New Atlas and STAT News have this one.

And in more blood test news, The Times (£) covered new research uncovering DNA alterations that could help identify people with more aggressive prostate cancer. Scientists focused on changes in a chemical ‘tag’ that sits on top on DNA in cells, and found a particular pattern was associated with more aggressive disease. The team hope this information could one day be used to make better treatment decisions for men with prostate cancer. iNews also picked up the research, jumping to some prematurely bold conclusions about the test’s potential to diagnose cancer early given the research was carried out on patients with advanced disease.

Analysis of aspirin use in more than 50,000 people with chronic viral hepatitis – who have a higher risk of developing liver cancer – suggests that daily low dose aspirin use could lower liver cancer risk. But scientists warned it’s too soon for anyone to start taking aspirin based on the study, as they haven’t yet proved the pill can help prevent cancer. Clinical trials would be needed to confirm the link and test if the benefits outweigh the harms. Unhelpfully, Mail Online and Express headlines also failed to mention the research only involved people with hepatitis B and C and weren’t applicable to most people.

Providing free school meals has helped to reduce childhood obesity, according to new study results picked up by The Guardian.

Advice on coronavirus for people with cancer

Coronavirus has dominated the news this week, with the viral outbreak now being declared a pandemic by the World Health Organisation. Together with the One Cancer Voice group of charities, we’ve pulled together guidance for anyone who might have questions about how the virus might affect someone who has, or has had, cancer. We’ll be monitoring the latest government and NHS health updates in both the UK and devolved nations and pulling together relevant information in our blog post. And you can find links to the latest government information on our website.

Mail Online took a closer look at a new approach for delivering radiotherapy – using MRI to help guide the treatment. We’ve blogged about the technology, which is currently being trialled in Manchester and London.

Mail Online also picked up new study results which show that young people who use e-cigarettes are nearly 5 times more likely to smoke tobacco in later life. But despite the potentially alarming figures, the link seen between vaping and smoking in young people could be a result of common risk factors, so isn’t necessarily causal.

Scientists have developed innovative imaging technology to understand more about how cancer cells spread. The quirky new technique has allowed them to measure the exact amount of force cancer cells put on healthy tissue to help them invade surrounding tissue. Mail Online has the full story.