Members of the STORMing Cancer team on a Zoom video call. Group of people on video call.

People throw around the old saying “teamwork makes the dream work”. As cheesy as it may sound, it’s a fitting tribute for our Cancer Grand Challenges STORMing Cancer team.

As a team of over 60 scientists working across 3 continents, they understand the importance of teamwork to ensure their research – investigating the role of inflammation in driving cancer – runs smoothly.

With up to 1 in 4 cancers linked to chronic inflammation around the world, the age-old mystery of the link between inflammation and cancer had stumped scientists for 150 years. But Professor Thea Tlsty was ready to tackle the challenge head on.

In 2019, she brought together over 60 researchers to make up the STORMing Cancer team, and was awarded £20 million as part of our Cancer Grand Challenges, which aims to unite researchers from around the world to tackle cancer’s greatest challenges

To celebrate World Cancer Research Day, we spoke to 3 members of the STORMing Cancer team – based in Canada, the US and UK – about how they’re teaming up to solve the mystery.

The lifecycle of a sample

Led by early results, the team is zooming in on the environment surrounding the tumour – a supportive web of cells and proteins called the stroma.

“We try to understand the interaction of stroma and epithelial components in order to understand the mechanisms that lead to cancer progressions, especially for chronic inflammation associated cancer,” explains Dr Deng Pan, a scientist from the STORMing Cancer team based at the University of California, San Francisco. “One of the important components of stroma is a cellular structure called the ECM, the extracellular matrix.” Deng Pan is part of the STORMing Cancer team, based at the University of California, San Francisco.

With such a diverse team of scientists, STORMing Cancer utilises the individual skills and expertise of those involved. And despite the distance, the team works together like a well-oiled machine.

The process begins in a hospital tucked into the southern border of Canada, where the samples, mainly taken from patients with bowel, stomach, lung and oesophageal cancer, are collected by the team surgeon in Montreal, Dr Lorenzo Ferri.

The samples are sent on to Pan in the Golden Gate city of San Francisco, where he meticulously isolates the ECM from the rest of the sample. By the time it arrives, the tissue is just 1 day old.

After being purified, the samples are sent on to the Buck Institute. Here, at a research centre nestled just a stone’s throw from San Francisco Bay, Samah Shah prepares the samples to be analysed. Sam Shah is based at the Buck Institute for Research on Aging, California.

Shah and Pan had never met before the STORMing Cancer effort, but their work is now intricately intertwined. They constantly update each other on their progress as they coordinate the delicate task of sending the samples, and the results of the analysis, back and forth between the two institutes, before sharing them with other team members across the globe.

“They’ll let us know as soon as they receive tissue samples and are in the process of preparing them,” says Shah. “And then when we prepare them for the mass spec and perform our analysis, then we immediately send our analyses back. And then Deng gives us some insight on what we can look into further and then there’s constant back and forth.”

As well as this protein analysis, samples are sent to various locations across North America, from Seattle to Boston, and examined using other state of the art techniques to find out as much as possible about the ECM and the stromal cells, and the crucial role they play in inflammation and cancer.

Meanwhile, on the other side of the Atlantic, in a famous university town in the South of England, a team is working on putting the analytic results into practice, searching for targets for inflammation–associated cancer in mice.

Elisa Moutin works with the Winton group, based at the Cancer Research UK Cambridge Institute, who are focusing their studies on a type of chronic inflammation of the colon, colitis.

“Currently, we’re optimising a process for decellularization. So only keeping the stromal part of the colon. And this is in order to find targets in the extracellular matrix that are modified in colitis and in colitis-associated-cancer,” explains Moutin.

“Deng has already been putting that in place in his Institute to process human sample. So we are in correspondence with him to find ways to implement his protocol in mouse tissue.”

It’s early days, but the international team is making great progress, finding out more and more about the role of the ECM.

“We’ve seen that there are huge changes as the tissue progresses from normal to tumorous tissue,” explains Shah. “We look at the proteins that are most robustly changing and then we can look into their functions and the biological pathways they’re involved in.”

And what’s possibly most promising arethe remarkable similarities the team are seeing between tumour samples from different patients. They’re able to spot clear signatures of proteins that are driving the breakdown in the ECM in chronic inflammation–associated cancers.

They’ve begun to identify patterns present for particular cancer types, but they’re also found that certain signatures hold up across different cancer types, suggesting a common process underlying the progression of these cancers.

These key proteins hold the key to the next step in the STORMing Cancer project. They could be used as biomarkers to help diagnose or monitor the progression or of an inflammatory cancer, or even as a target for treatment.

The STORMing Cancer project is unlike other research projects, not merely because of its size, but because each institute and team member involved, is highly specialised. 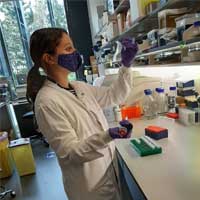 Elisa Moutin is working on colitis-associated-cancer with the Winton group, based in Cambridge.

Shah says the different skills are put to good use, with each lab bringing their own expertise to the project.

“For example, Deng has this established protocol for how to isolate the ECM from the sample, and then he would send it to us because we’re specialised in mass spectrometry.

“But that’s definitely not how it would work in another project. They would just send the tissue sample our way and we would do everything from beginning to end.”

For Pan, working in this unique way can bring new perspective on the research of the tissue microenvironment.

“It’s very useful to have insights coming from someone who has a scientific background not necessarily in your specific subject. It’s really nice to have someone’s opinion that’s kind of outside the box and makes you think in a different way,” Moutin adds.

Organising such a large team across multiple time zones is no mean feat, particularly with the added challenge of a global pandemic. But with scientists in 4 continents, the team had a head start when it comes to navigating online meetings. The entire STORMing Cancer team have weekly calls, involving individuals from multiple areas of the project, where they discuss results and ideas.

“It’s a really great way to collaborate with each other because we can constantly find new avenues to explore through our research,” Shah comments. “And as we progress and the knowledge base becomes deeper and all these different teams working on different parts of the project, there are more opportunities to make connections.”

“It’s been really rewarding to be a part of this project, especially as a young scientist, I feel really honoured to be able to contribute.”