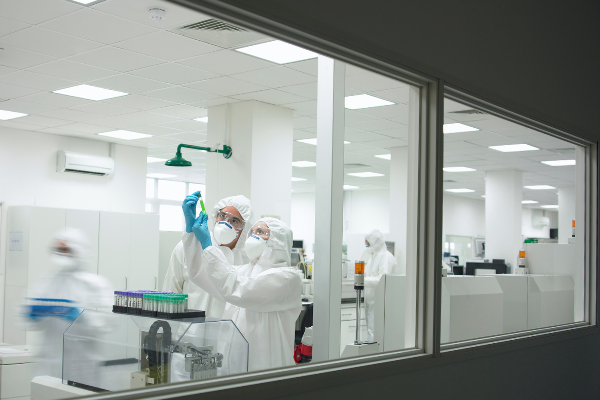 Now more than ever, we’re reminded of the importance of medical research in understanding human health and fighting disease. And, as we’ve seen with the COVID-19 vaccine, while researchers and their discoveries are critical to this process, collaborating with industry partners is what transforms promising lab discoveries into tangible results for patients.

At Cancer Research UK, our Commercial Partnerships team act as the meeting point between our charity-funded research and industry. They help to accelerate the translation of research into new products and techniques for patients through the development and commercialisation of the best new discoveries.

By collaborating with industry partners, we’ve already steered 160 agents into early clinical trials and more than 60 into first-in-human trials (including 14 first-in-class drugs), and we’ve helped bring 10 cancer drugs to market. To date, this work has generated £500m in cumulative royalties, which has been invested back into our research.

Here, we highlight some of the most exciting science to emerge from our commercial partnerships over the past year.

Broadening the life-saving effects of checkpoint inhibitors: our partnership with Microbiotica

When immuno-oncology checkpoint inhibitors came on the scene as an alternative to traditional cancer treatments, all eyes turned to these promising new kids on the block. Since then, researchers have established that the gut microbiome plays a critical and causal role in determining whether a person with cancer will respond to these broad-spectrum therapies – which stimulate the immune system to take on cancer cells. But leaders in the field have yet to agree on the bacteria involved in this unfair selection process. Why do some people with certain cancers respond remarkably well, while others simply don’t?

To answer this vital question, in May this year we partnered with award-winning biotech company Microbiotica and the Cambridge University Hospitals NHS Foundation Trust. By building on findings from the completed melanoma clinical trial, MELRESIST, and uniting it with the class-leading melanoma, renal and lung cancer clinical trial, MITRE, researchers are illuminating this opaque area of our understanding. They’ve already located a highly predictive bacteria signature – a consistent giveaway for whether a person with melanoma will respond positively to checkpoint inhibitors. They’re now using this to advance a ‘live bacteria’ therapy and a biomarker that can accurately predict a person’s drug response. Both innovations have the potential to greatly increase the number of people who can benefit from this often prognosis-pivoting class of therapies.

Bolstering the body’s own natural defence: our partnership with Bicycle Therapeutics

Central to the body’s immune arsenal are T and ‘natural killer’ (NK) cells – which, as their name implies, defend the body against foreign cells including cancer cells. It’s no wonder, then, that cancer researchers have identified these cells as allies in their efforts. But there remains a problem: much like humans in general, these immune cells become exhausted after prolonged battle. Combining T and NK cells with immune stimulants such as antibodies and cytokines – proteins secreted by immune cells that act as chemical messengers – can help to overcome this inevitable fatigue and vastly improve outcomes for people with cancer. But therein lie more problems: there are limits to their efficacy and the approach can cause unintended side effects, such as liver problems.

Cambridge-based Bicycle Therapeutics aims to circumvent these limitations and provide a safer alternative with their innovative bicyclic peptide technology. In January, we partnered with the firm to advance it further. So how does it work? ‘Bicycles’ are synthetic small molecules that act as agonists, which bind to receptors to stimulate a biological response. We’re sponsoring the advancement of a specific molecule called BT7401, comprising a group of linked ‘Bicycles’. BT7401 attaches itself to a key receptor on the surface of the body’s immune cells and activates them – imagine, if you will, a good citizen spotting an armed criminal and calling the police. In partnership with Bicycle Therapeutics, we’re working with our network of scientific and clinical investigators to progress BT7401 through preclinical studies and sponsor a first-in-human clinical trial. It’s hoped that this molecule will make combination therapies more effective, limit side effects and reinvigorate the immune system against cancer.

Another company harnessing the power of the mighty T cell is Vaccitech Oncology Limited (VOLT). Their technology, a therapeutic vaccine to treat non-small cell lung cancer – the most common of the lung cancers – is being developed with expertise from three leading cancer research organisations. We’re working with VOLT, a collaboration between the Ludwig Institute for Cancer Research and Vaccitech Limited, to advance the easily-administered therapeutic vaccine, which uses specially engineered viral vectors – tools used to deliver genetic material into a cell – to stimulate the immune system to produce T cells. This abundance of newly generated immune cells has been set one task: to consistently kill cancer cells. The highly targeted approach could dramatically boost the anti-cancer cell immune response in people with the disease and help them to lead longer and healthier lives.

Initiatives like these are pushing the boundaries of what’s possible in science. And thanks to our supporters and philanthropic partners, we can facilitate and advance the most promising research from bench to bedside through these and many more commercial partnerships.

As Tony Hickson, our chief business officer, explains: “We help to gather together all the expertise and resources needed to translate promising research into new therapeutics, diagnostics and other innovations that benefit people with cancer. Without such partnerships, research with significant potential may never reach those who need it.”