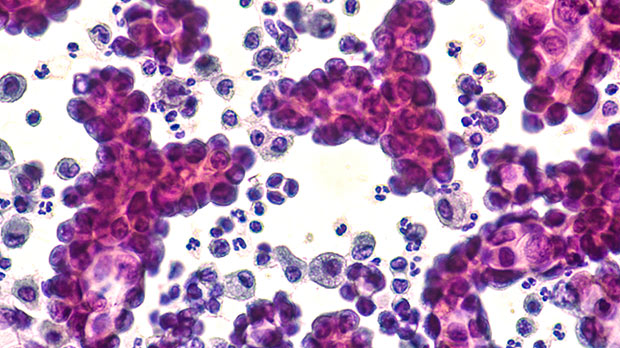 A new treatment for some people with a type of non small cell lung cancer (NSCLC) will now be routinely available on the NHS in England, following its approval by the National Institute of Health and Care Excellence (NICE).

The decision means the immunotherapy drug pembrolizumab (Keytruda), in combination with the chemotherapy drugs carboplatin and paclitaxel, will continue to be an option for adults with untreated, squamous non small cell lung cancer that’s spread to other parts of the body.

The combination was previously available to people in England through the Cancer Drugs Fund, which gives people access to innovative treatment while more data is collected on their long-term benefits.

“From supporting patients throughout their lung cancer journey, we understand how devastating a lung cancer diagnosis is,” said Lorraine Dallas, Director of Prevention Information and Support at Roy Castle Lung Cancer Foundation. “That is why we welcome this treatment option.

Having ways to manage their cancer and maintain their quality of life in the face of uncertainty is valuable.”

The decision follows the approval last year of pembrolizumab alongside a different combination of chemotherapy drugs, pemetrexed and cisplatin, to treat those with a different type of non small cell lung cancer.

This treatment combination was made available through the Cancer Drugs Fund after initial trial data indicated that adding pembrolizumab increased survival for people with untreated, squamous non small cell lung cancer that’s spread to other parts of the body.

“The combination of immunotherapy and chemotherapy used in this trial, which has now been commissioned for routine use on the NHS in England, is a major breakthrough for this subtype of lung cancer, which until now has had few treatment options, poor prognosis and relatively little positive research compared to other forms of lung cancer,” said Dr Toby Talbot, consultant oncologist at Royal Cornwall Hospital.

Pembrolizumab is an immunotherapy that aims to boost the immune system’s ability to recognise and kill cancer cells. It works by blocking a molecule found on immune cells – called PD-1 – from talking to cancer cells by attaching to a protein known as PD-L1.

In 2020, the drug was approved for use in England for some cancers, but this depended on whether or not tumours tested positive for PD-L1.

Now, the drug is approved for a new subset of lung cancer patients – those with squamous non small cell lung cancer, in combination with carboplatin and paclitaxel, meaning even more people can benefit from this immunotherapy drug.

There are several different types of lung cancer, usually defined by the kind of cell the cancer starts in. Knowing the kind of lung cancer someone has can determine what kind of treatment they should receive.

Learn more about the different types of lung cancer

NICE decisions are usually adopted in Wales and Northern Ireland as well, so the decision is likely to affect patients in all 3 nations. Scotland has a separate process for reviewing drugs.

Could this treatment be used to treat someone who has adenocarcinoma lung cancer which is in the lymph node? If not, are there any promising/successful clinical trials that are currently showing positive responses?