Our most important cancer research stories of 2022

Our 20th anniversary year has been about much more than looking back. 2022 has been full of research and advances that are worth celebrating in themselves.

Read on to find out what our scientists have been working on this year, and to learn more about the people that make their discoveries possible. 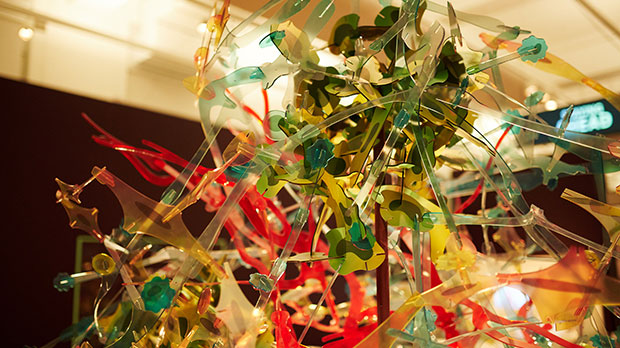 A tumour model at Cancer Revolution in London. We're the Science Museum's expert partner for the show.

Cancer is at its most dangerous when it spreads through the body. This is called metastasis.

Until this year, we didn’t really understand how the process worked, which limited what we could do to stop it.

But, in October, scientists at our Cambridge Institute identified a protein that regulates metastasis, completely changing our understanding of how cancer spreads.

The protein, known as NALCN (nal-kan), isn’t unique to cancer, either. It turns out that cancer cells manipulate it so they can exploit a process that also occurs in healthy tissues. They may even be turning one of the body’s repair mechanisms to their own destructive ends.

By using drugs to turn NALCN back on in cancer cells, researchers might be able to stop them from spreading through the body, effectively preventing the main cause of cancer death.

Group leader Professor Richard Gilbertson called it one of the most important findings to come out of his lab in 30 years of research.

“If you could stop metastasis,” he told us, “or significantly suppress it, you’re getting towards managing cancer for the long term, and that’s the Holy Grail.”

Every cancer is different. It’s hard to believe, but some won’t even cause noticeable health problems.

Prostate cancers are a good example. Many grow too slowly to make any difference to the length or quality of a person’s life.

And if a cancer isn‘t going to have any meaningful health impacts, we don’t need to treat it. That means sparing people from drugs and procedures that can cause their own harmful side effects.

To do that, though, we need a way to tell the difference between aggressive and slow-growing cancers. This year, some of our funded researchers may have found one.

Their approach involves an advanced type of MRI, which is commonly used by doctors to see what’s going on inside the body. The team used it to accurately identify which tumours were ‘clinically significant’ and needed treatment, and which were ‘indolent’ and only needed to be observed over time.

The next step is to trial the technique in a larger group of patients. We’re funding that work, too.

“In the future this technique could help guide doctors with their treatment decisions,” said Professor Ferdia Gallagher, one of the leaders of the study, “ensuring patients undergo immediate treatment if needed, or that their cancer is monitored closely when not on treatment.”

Keeping up the pressure on lung cancer

This year we announced TRACERx EVO, the next phase of our flagship lung cancer study.

TRACERx is already the largest and most detailed lung cancer study of its kind. Here are just a few highlights:

Terry was diagnosed with lung cancer in 1989. Following treatment, Terry was told he was in remission, and has been a keen supporter of our work ever since. 1/2 pic.twitter.com/1iUrtza83g

But now we want to go even further. The TRACERx EVO team, which is made up of experts from across Europe and North America, will study lung cancer from its earliest to its most advanced stages to improve how we prevent, diagnose and treat it.

In the first place, that means looking more closely at how the disease starts in people who don’t smoke. The team will also follow its progression, considering how the environment around tumours affects how the disease develops. And they’ll study cancer cachexia (kak-ex-ee-a) – the wasting syndrome that leads to severe weight loss, weakness and fatigue in 80% of people with advanced cancers.

Today, cachexia is still poorly understood, but TRACERx has already shown just what we can find out when we combine commitment and funding with expertise and attention. We’ll keep you updated on everything that happens in the next phase of the study.

Sometimes, our research leads in some unexpected directions. Sometimes, they involve Viagra.

It’s not what it sounds like. Or not entirely. This year, a team we part-funded showed that the same properties that make Viagra an effective treatment for erectile dysfunction can actually help strip away the defence systems used by some cancers. That means it could be used to make hard-to-treat tumours more sensitive to chemotherapy.

The researchers found that chemotherapy-resistant tumours in mice shrunk more when they were treated with erectile dysfunction drugs and chemotherapy than with chemotherapy alone. That bodes well for people – we already know that drugs like Viagra are safe and well-tolerated.

And that’s not the only exciting advance we made against treatment-resistant cancers in 2022. Another one of our research teams found a molecule in some cancers that makes targeted therapies called PARP inhibitors less effective against them.

That molecule can be blocked with another pre-existing drug: disulfiram, which is currently used to help people cope with alcohol addiction.

These findings show why our commitment to basic research into how cancer works is so important. Sometimes a new drug isn’t the best solution. Looking more closely at cancer can show that, in the right combinations, the tools we already have might be much more effective. And we can start using them much sooner, too.

Throughout 2022, the Cancer Grand Challenges initiative, which we co-founded with the US National Cancer Institute, has continued to make some of the world’s best science possible.

For the third funding round, we gave a total of £80m to 4 teams with the vision and expertise to solve some of the deepest and most important mysteries around cancer. They’re bringing new thinking and unparalleled track records to big questions like why the disease develops in the first place and how it evolves to escape the immune system and resist treatment.

In fact, one of our newly funded researchers, Professor Carolyn Bertozzi, even won this year’s Nobel Prize in Chemistry. She’s part of the NexTGen team, using her knowledge to help develop a gentler and more effective way to treat solid tumours in children.

That’s not all. In December, one of the first round teams, IMAXT, launched an entirely new way to study and understand tumours. Their virtual reality cancer lab and tumour modelling technology could give scientists a more complete and integrated understanding of cancer than ever before, helping them to develop new ways to diagnose and treat it

Paying tribute to the people who make this possible

All of this is thanks to our incredible supporters. the people that give their time, money, effort and energy to help beat cancer sooner.

This year we lost Dame Deborah James – a deputy headteacher, who, after being diagnosed with stage 4 bowel cancer in December 2016, chose to share her story with the world. To raise awareness and challenge taboos, she became Bowelbabe, a newspaper columnist, podcaster, bestselling author and campaigner like no other. As far as attitudes to cancer are concerned, the world hasn’t been quite the same since.

In May, with her health declining, Deborah said there was one more thing she wanted to do before she died – raise as much money and awareness as possible. She launched The Bowelbabe Fund for Cancer Research UK and set a target of raising £250,000. The total today is over £7,500,000 – more than 30 times as much. It’s a true testament to the number of lives she touched.

She worked tirelessly to support @CR_UK and other charities she was passionate about. She loved to be amongst people, working the room and making the most of every occasion. pic.twitter.com/WCTzuXH4HG

“Deborah did whatever she could to fundraise, challenge taboos, and raise awareness of cancer – with honesty, compassion and humour,” said Michelle Mitchell, our chief executive. “She was an inspiration to so many people, and her impact will be felt for years to come.”

Dame Deborah James was one of a kind. And, in another way, she was no different from anyone else.

1 in 2 of us will be diagnosed with cancer in our lifetime. Deborah’s brilliance and bravery is mirrored in every single person who is confronted by that news. Our work is about keeping their light in the world.

Thank you for all your support. This is only a glimpse at the incredible work your generosity has made possible. Stay tuned next year to see more.

Thank you for the wonderful update.
Was discharged from my consultant after uterine cancer a year ago following surgery.

When I read this email I cried a lot because you are discovering things that could have helped four people in our village community who have died with cancer in the last three months. I know your discoveries will help people in the future and that is a great blessing.

Very promising, but the fact is we are behind several other countries in respect of death rates – Why ?
I assumed a global assault on this vile disease with data shared.

International differences in how likely people are to survive cancer can be the result of a variety of factors, from late-stage diagnosis to patients not having access to the most effective treatment.

The International Cancer Benchmarking Partnership (ICBP) has been reporting international variation in cancer survival for over 10 years, giving us insight into how the nations of the UK compare internationally.

You can read about their most recent research, which found a link between cancer policy consistency over time and cancer survival here. Their previous research has also shown that more cancers are being diagnosed through emergency routes in the UK than in comparable, high-income countries like Australia and Canada. You can read about that here.

However, cancer survival is improving overall in the UK and has doubled in the last 40 years, though this varies between cancer types.

Fantastic enlightening update. My darling husband died in March 2022 from bowel cancer and it’s wonderful to see the work that is continuing to fight back at this dreadful disease.

As the wife of a husband who has malignant melanoma, I am moved to tears by the courage & stories of so many people with life threatening disease. My husband was diagnosed in 1998 & without his immunotherapy medication would not be alive today.

Wonderful update and insights behind the pioneering research in cancer right now.

A fantastic update and insight to the progress scientists are making.

I think the tireless research that you do, and the new discoveries are amazing !
I would like to increase my monthly subscription / contribution – please contact me?!

We’re so pleased you’d like to increase your monthly donation. You can do so by filling in the form here: https://www.cancerresearchuk.org/get-involved/donate/request-increase

Thank you so much for your continued support. We couldn’t do any of our work without donations from people like you.

brilliant work eventually cancer might be defeated through your research

This is extremely encouraging! I have tremendous admiration for the dedicated researchers and for the wonderful fundraisers. Thank you so much. 👏👏

Brilliant work CRUK. It brings us cancer patients so much hope to see these amazing discoveries happen. Looking forward to your work in 2023 and hopefully advance these discoveries to the clinic