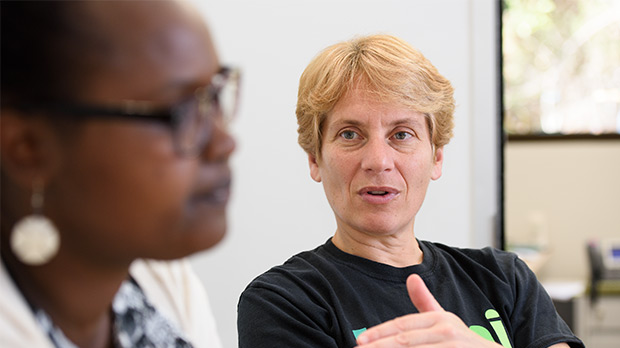 Professor Carolyn Bertozzi won the 2022 Nobel Prize in Chemistry for a technique she developed to look at tiny strands of sugar on the surface of our cells.

Well, that’s one way of putting it. You could also say she took the kind of complex chemistry that used to require a sterile, high-tech science lab and modernised it for performance inside living organisms.

Bertozzi, who works at Stanford University in California, US, named her technique ‘bio-orthogonal chemistry’, which means it occurs in living cells, but doesn’t interfere with other biological processes.

In the years since she first developed it, Bertozzi’s method, and the sugars she used it to look at, have helped advance our understanding of how cancer works. Now they’re even giving us new ways to treat it.

Already, there are clinical trials testing whether bio-orthogonal chemistry could be used to aim chemotherapy drugs directly at tumours and minimise side-effects like nausea, exhaustion and hair loss. Other groups are using it to improve certain types of radiotherapy, and to make it easier to spot cancer cells in the body.

But Bertozzi herself is now focusing on immunotherapies, which help people’s immune systems fight cancer.

And that’s where we come in. As well as being a Nobel Laureate, Bertozzi is part of NexTGen, the Cancer Grand Challenges team we’re co-funding it with the US National Cancer Institute and The Mark Foundation for Cancer Research to develop new ways to treat solid tumours in children.

Bertozzi’s role in the team comes back to those sugars. Cancers use them to protect themselves. NexTGen has a plan to stop that happening.

But there’s one area where things haven’t improved so quickly: solid tumours. Survival rates for children with some of these rare cancers have hardly changed in over 30 years.

We’ve got much better at treating solid tumours in adults in that time, but cancers are different in children and young people. As well as appearing in different places for different reasons, they have far fewer mutations for us to target with advanced drugs, meaning more specialised treatments developed for adults aren’t effective.

The Cancer Grand Challenges are all about taking a different approach to difficult problems. NexTGen isn’t going to keep trying drugs just because they work for adults. Instead, the team is adapting a type of immunotherapy that works well on childhood blood cancers to target some of the unique features of solid tumours.

Cutting through the sugar coating

CAR-T cell therapy has been used by the NHS to treat certain rare, high-risk blood cancers since 2018. It’s given to an average of 15-30 children and young people in the UK every year.

It’s a complicated and specialist treatment that involves immune cells being taken from the blood and altered to recognise cancer cells as a threat. When they’re put back, these cells guide the immune system to attack cancers that it couldn’t even see before. Cancer cells in solid tumours aren’t the same as those in blood cancers, so CAR-T cells need different directions to be able to find them.

Unhelpfully, most of the signs we currently look for on solid tumour cells are also common on important healthy cells elsewhere in the body. That means CAR-T cells tuned to find them can cause severe side effects.

So, to tackle solid tumours, we need a new type of target. That’s why NexTGen is so interested in sugars. Cancer cells are especially thick with ones called sialoglycans.

There’s a good, if devious, reason for this: healthy cells use these sugars to signal to the immune system that they’re on the same side. As far as cancer cells are concerned, that makes them the perfect disguise.

Healthy cells, which don’t have anything to hide, prune what Bertozzi has called a neat “garden” of sialoglycans. But cancer cells are nervous. They overcompensate, coating themselves in a dense sugar “jungle”.

On the one hand, this means normal immune cells can’t see the cancer for the sugar. On the other, it means cancer cells make sloppy mistakes. Just as jungles are more diverse than lawns, cancer cells also grow unusual, or ‘aberrant’, sialoglycans that rarely appear on other cells.

Those are all potential targets for CAR-T cells.

In fact, we’ve already found one.

It’s a sugar called GD2, and there’s a lot of it on cells from multiple types of children’s cancer. Drugs targeting it in children affected by high-risk neuroblastoma, a rare type of cancer that usually starts in developing nerve cells, have been available on the NHS since 2018.

That’s something to build on. Multiple researchers on the NexTGen team have promising results from early studies showing CAR-T cells that lock on to GD2 could be even more effective while causing fewer side effects.

It’s also likely there are more targets like GD2, but, until now, no one has tried to investigate all the sugars that appear on solid tumours in children. Bertozzi’s lab gives NexTGen the Nobel-winning expertise to change that. 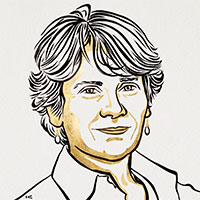 That’s especially important because cancer cells can adapt under pressure from the immune system to produce different sugars instead of GD2. To tackle hard-to-treat tumours, we need to be able to predict these counters.

Bertozzi helps there, too. She is also an expert in ‘Siglecs’, the receptors on immune cells that interact with sugars. Like bio-orthogonal chemistry, these can be used as tools to identify different sugars in the body.

But that’s not all. Unlike the receptors used on current CAR-T cells, Siglecs can look for multiple targets at once. By exploiting this, NexTGen can target different types of sugar within the same tumour, making it harder for cancer cells to adapt and escape.

It’s a big change from what cancers are used to. Usually, the jungle of sugars on tumour cells suppresses the immune system by interacting with Siglecs on immune cells. For adult cancers, though, Bertozzi’s lab has already developed multiple drug candidates that use Siglecs of their own to stop this happening, flagging cancer cells to the immune system while disrupting their defence mechanisms.

Those treatments are a foundation for NexTGen to develop truly ‘next generation’ CAR-T cell therapies for children and young people. Not only will they be able to seek out solid tumour cells that are using sugars to hide from the immune system, they’ll also make it harder for cancers to become resistant to treatment.

And, as impressive as all that might sound, it’s only a fraction of NexTGen’s overall project.

Rising to the challenge

It’s difficult to see how this sustained focus on rare childhood cancers could happen without Cancer Grand Challenges. By bringing together the world’s leading experts – and ensuring they work closely with people affected by cancer – we believe we can tackle the most complicated and pressing problems.

“This is something that really is only possible through Cancer Grand Challenges,” said Professor Charles Swanton, our chief clinician and a member of the Cancer Grand Challenges Scientific Committee, when NexTGen was selected for funding. “Because these are relatively low incidence tumours, [they aren’t] traditionally targeted by the pharma industry.

“CAR-T cell therapies have had incredible success in the context of childhood leukaemia, but their progress in solid tumours has been relatively slow,” continued Swanton. “This Cancer Grand Challenge is primed to really accelerate progress in this key area of unmet need in paediatric oncology.

“We’ve got all the tools now; we know what to do.”

It seems the Nobel Prize committee would agree.

Click chemistry is a way of quickly and efficiently linking molecules without having to mimic the specialised processes used in nature. It also minimises the unwanted by-products left behind by traditional reactions.

Bio-orthogonal reactions work in a similar way. Bertozzi created the first one when she applied elements of click chemistry to her own studies, updating and modifying it to work in living cells without disrupting their normal chemistry.