From athlete to wig-maker: how cancer changed Maria’s destiny 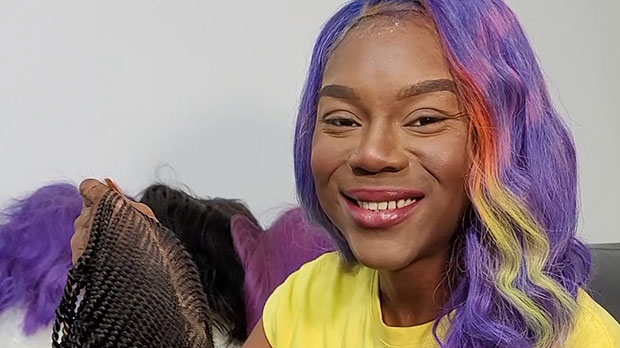 We often say people are born to do something, or born to be something, and Maria Lawal will tell you she was born to be an athlete.

As a schoolgirl she played basketball and netball, and ran long jump and circuit, until one day she was diagnosed with osteosarcoma, a form of bone cancer, when she was just a teenager.

And when Maria was told she had to have surgery to remove a bone in her leg, her dreams of a career in sport suddenly felt completely out of reach.

Now fit and well, the 29-year-old rising entrepreneur says her life-changing diagnosis led to the discovery of her true destiny, which lay in a future dedicated to helping other people living with cancer.

Dreams of a sporting career shattered

Maria had just turned 15 when she started getting an intermittent pain in her left thigh which was initially thought to be a sporting injury from training.

Then one day the teenager, who grew up in Manchester, discovered a lump, and when the pain worsened, her family took her to A&E.

A scan found a tumour, and in February 2008 Maria was diagnosed with osteosarcoma. She went from playing sport most days after school to scheduling her life around hospital appointments.

“I was so shocked when they told 15-year-old me that I had cancer,” she says.

“I was the first person in my family to have cancer and I couldn’t understand why it had happened to me when I was young and so fit and healthy. My dreams of being an athlete were over, but I was determined not to give up on myself and not let my family down after everything we’d been through.” Maria in a wheelchair following her treatment

Nigerian born Maria began chemotherapy before undergoing life-saving surgery to remove the bone from her hip down to her knee, which was replaced with a titanium prosthesis.

She initially received chemotherapy for eight months, but unfortunately 18 months later, during a routine check-up, doctors found tumours in her lungs and she required yet more chemotherapy.

Before her treatment started, Maria had “bouncy, luscious hair” that she always experimented with, until the moment came when she realised her hair was falling out.

She recalls: “I remember being at home with my sister and she was taking out my cornrows and instead of it being the cornrow hair extensions, it was my actual hair literally falling out in clumps. It was so traumatic, me and my sister and my mum just sat on the floor crying.

Then when I went trying on wigs, I just felt instantly older. All I could see when I looked in the mirror wasn’t myself, but a cancer patient in a wig.

An estimated 43,600 people are diagnosed with cancer every year in the North-West, and Maria said it was losing her hair that made her determined to do something to help the many women like her who receive the heart-breaking diagnosis.

Feeling beautiful inside and out

And so, in 2019 Maria started her online wig making business, Ade Me (‘My Crown’ in Yoruba), which has gone on to provide wigs for up to a hundred women across Greater Manchester who have lost their hair during chemotherapy treatment.

“I want women and girls to look at themselves in the mirror and feel confident and beautiful inside and outside,” says Maria, who colours all of the wigs herself. “I want them to see themselves as heroes and not as a cancer patient in a wig that doesn’t feel, or look like them. I still wear my wigs now; I just love having a choice of colour and style each day.”

Maria, who recently moved to Rochdale with her husband, Saliu and their 18-month-old son Zyon, also offers makeup tutorials to women going through cancer treatment, offering hints and tips via online one-to-one sessions.

She said: “My skin changed dramatically during chemo. It was so dark and so dry and just so different to my normal skin. I know many girls and women struggle with how to wear makeup when their skin is going through these changes, so it’s another way I can help to make girls feel like themselves again.” Alongside her wig making business Maria has also spent much of her adult life, after going into remission, working as a patient advocate helping other cancer patients like her, and she is passionate about spreading positivity.

She added: “After having my son, I felt compelled to write a book for children containing the positive mindset mantras that I believe helped me though my cancer journey. My book is about building confidence in yourself from a young age and I read it to my son every single day.

“I believe that having a positive outlook can help you so much. It has helped me to take a different direction in my life and I am truly happy.

“Helping other people makes me so happy. There is no better feeling than the look on a girl’s face when I hand over the wig I have made. The tears of joy are incredible.”