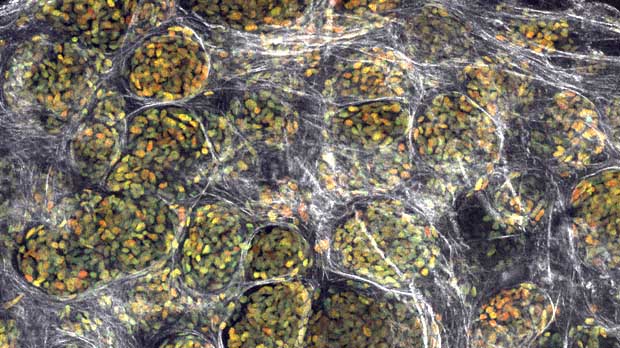 Drug resistance is a big problem, particularly for advanced melanoma.

People with melanoma respond well to a new generation of targeted cancer drugs. And landmark research from our scientists paved the way for one of these drugs, called vemurafenib (Zelboraf).

But the sad truth has been that in many cases, the cancer cells will eventually stop responding to these drugs and the disease will come back.

Understanding the ways in which melanoma cells develop this resistance is a big challenge. But researchers from across the globe are piecing together this complex picture, uncovering an array of cellular escape routes and proposing ways to block them.

Now, Dr Erik Sahai, and his team funded by us at the Francis Crick Institute, has uncovered a new route to resistance.

Publishing their findings in the journal Cancer Cell, the researchers – working with Professor Richard Marais’ team at the Cancer Research UK Manchester Institute – shed light on how the environment around a melanoma cell may play a role in drug resistance and, crucially, offer a potential new way to stop it.

A place to hide

The image above shows brightly-coloured melanoma cells nestled among a wiry cobweb of white fibres.

These fibres are made of collagen – an important protein that forms part of the environment around a cell, called the extracellular matrix.

But just as a cobweb provides a safe home for a spider, the new study shows how the extracellular matrix may provide a ‘safe haven’ for melanoma cells and encourage resistance to treatment.

The melanoma cells have been engineered to produce a fluorescent sensor that tells the researchers whether a key set of signals that help the cells grow are switched on or off.

These cells have been treated with a drug that targets melanoma cells carrying a fault in the BRAF gene that causes them to survive and grow uncontrollably. BRAF switches on a series of important growth signals called the ERK pathway. “If the drug is effective, the colour turns into blue, but many cells in this image retain red colours, indicating that the cells are not affected by the therapy,” Hirata adds.

So how does a drug treatment that’s initially successful in killing cancer cells slowly become something that cancer cells can tolerate?

Working with experimental laboratory models of melanoma the researchers found that drug resistance only appeared when the cancer cells were grown within the extracellular matrix and among other supporting structural cells.

These specialised support cells – called melanoma associated fibroblasts – responded to the drug treatment by twisting and shaping the extracellular matrix and laying down new protein fibres at the same time.

The team found that this refreshed network acts as a ‘safe haven’ for the cancer cells, switching on a different set of signals inside the cells that reactivates the ERK pathway – and allows the cancer cells to grow again.

Switching the cell signals back on via this alternative escape route means the cells can withstand the treatment, glowing orange and red again instead of the cooler blue colours.

The next step was to find a way to halt the resistance.

Following a meticulous set of experiments the team found that the escape signal was controlled by another important protein called FAK – we’ve written about FAK before.

The researchers reasoned that if they could switch off the FAK escape signal at the same time as the BRAF signal, then the cancer cells would be unable to become resistant to the treatment.

Crucially, drugs that target FAK are already being developed as potential cancer treatments on their own. These drugs are still in the early stages of development, but when the researchers combined an experimental FAK drug with the BRAF treatment the cancers cells stopped growing and started to die.

This was a striking result, and offers important early evidence that combining these two treatments could help control the growth of a melanoma for longer than just using the BRAF treatment alone.

From control to cure

While the combined treatments stopped the tumours from growing in the team’s lab models, the tumours didn’t go away completely – put simply, the treatment wasn’t a cure.

But the findings offer a potential window for further research to find additional treatments that could push this response from control to cure. And important studies like this one lay the ground work for what could go on to become clinical trials in people with melanoma.

It’s only by studying melanoma cells alongside the surrounding ‘supportive’ healthy cells that we’ll truly understand the best treatment approaches to test in trials.

And by peering inside this world that surrounds a tumour, Sahai, Hirata and the rest of the team are leaving melanoma cells with no safe place to hide.

The old “seed and soil” hypothesis of cancer prompted thought into the role of the environment in initiation and nurture of a tumour, but what is described here extends the idea. Similar insights have occured in microbiology with the realisation that mixed bacterial communities live within a matrix on surfaces without and sometimes within our bodies to give rise to very different properties of drug sensitivity than those observed in the laboratory.