Neuroblastoma cells can produce a cellular ‘kryptonite’ that saps the power from nearby immune cells. Via Flickr/CC BY 2.0

Like a horde of microscopic cellular superheroes, each with unique superpowers, your body’s immune system is made up of many different types of cells, all working together to defend you from alien invaders.

But as well as these external threats, the immune system is also capable of fighting another foe: cancer. So harnessing these superheroes’ powers, and directing them against this enemy within, has long been a goal of researchers.

This approach to battling cancer – called immunotherapy – has generated a lot of excitement in recent years, with several new drugs showing success in clinical trials for cancers like lung cancer and melanoma.

There’s considerable evidence, as we’ll see below, that it could be of particular benefit for children with neuroblastoma, a cancer against which progress has been slow, and which desperately needs new treatments.

But a new Cancer Research UK-funded study, led by Dr Francis Mussai at the University of Birmingham, has revealed that persuading our immunological superheroes to target neuroblastoma cells might be trickier than initially thought.

They’ve discovered that neuroblastoma cells can produce a cellular ‘kryptonite’ that – like Superman succumbing to his greatest weakness – seems to sap the power from nearby immune cells.

Thankfully, understanding this mechanism is the first step to unlocking the power of the immune system. And this could finally lead to a way to help patients with the disease. Neuroblastoma is a childhood cancer that affects around 90 children a year in the UK, and is usually diagnosed in children under the age of five. The disease develops when the cells that are supposed to form nerve cells go wrong as a baby develops in the womb.

We’ve written before about how Cancer Research UK is dedicated to finding the best possible combination of chemotherapy drugs for neuroblastoma, particularly for children whose cancer has come back.

But scientists are also developing treatments that exploit one of the disease’s unique properties: almost all neuroblastoma cells are covered with a molecule known as GD2, which is very rarely found on healthy cells.

And this unique external appearance makes it stick out like a sore thumb, and so is a perfect target for immunotherapy.

This is because immune cells work by recognising specific molecules on the surface of cells, which flag them up for destruction.

So getting the immune system to target any cells covered with GD2 could offer real hope for children with neuroblastoma.

Unfortunately, previous work to exploit this hasn’t worked as well as scientists had predicted.

But this is where the work of Francis and his colleagues comes in.

The team examined what happened when they mixed a certain type of healthy immune cell with neuroblastoma cells taken from patients.

Surprisingly, they found that the immune cells, called T cells, suddenly became incapable of doing their jobs. Their ability to grow, attack cancer cells and alert other immune cells to danger were all dramatically reduced.

“There didn’t seem to be any direct signal the cancer cells sent to the immune cells,” Francis told us. 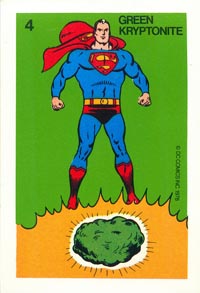 “The neuroblastoma cells just acted like kryptonite to the T cells” Via Flickr/CC BY 2.0

“The neuroblastoma cells just acted like kryptonite to the T cells. As soon as they were brought together, all of the normal cancer-fighting abilities of the immune cells were dramatically weakened.”

So what was happening?

Cancer cells grow incredibly rapidly. And to do this they use any source of energy they can find. And it turns out that neuroblastoma cells are particularly fond of feeding off a chemical called arginine.

Arginine is one of the 20 amino acids that form the building blocks of all proteins. To use it as a fuel, neuroblastoma cells produce an enzyme called arginase II, which breaks down the arginine for fuel.

The cancer cells devour so much arginine that the chemical gets pulled in from the surrounding area – even from the nearby blood stream.

But – by an unhappy coincidence – it also turns out that arginine is absolutely critical for immune cells to function. Some immune cells need it to form a reactive chemical called nitric oxide, which is used to break open the bacteria and cancer cells the immune system may be fighting. T cells also require arginine to replicate and produce a crucial cell-killing weapon called the T-cell receptor.

“All the immune system needs to fight cancer is help identifying the target, a boost of some kind, or something that cuts its brakes.

“The idea that the patient’s immune system is made impotent by the cancer itself changes this equation. Just growing up in an environment lacking arginine seems to be enough make a patient’s T cells sluggish and ineffective.”

Clearing the obstacles in our path

Although this all may sound like bad news, it’s vital we spot these hidden obstacles to find the best way around them.

The next step is to work out how we can use these new findings to improve immunotherapy treatments for this disease.

Researchers can now start working on finding out whether blocking arginase II, or supplementing immunotherapies with extra arginine, could boost their effectiveness against neuroblastoma.

And this could jump-start clinical trials into neuroblastoma, and bring the benefits of immunotherapy to patients with a form of cancer that desperately needs a game changer.

Figuring out how to contain this ‘kryptonite’ could ultimately be the key to unleashing the immune system against this childhood disease. And it’s only through research that we can clear these obstacles and find better treatments for children with neuroblastoma.

Well done Dr Mussai and team, Excellent read, gives real hope to those like myself who lost beautiful children to the beast that is neuroblastoma. Knowing that People are still trying to find a cure and better treatment. Its to late for my princess Niayah but a great comfort to know that dr’s like you are still trying to help.