1 in 2 of us will get cancer in our lifetime. All of us can support the research that will beat it. 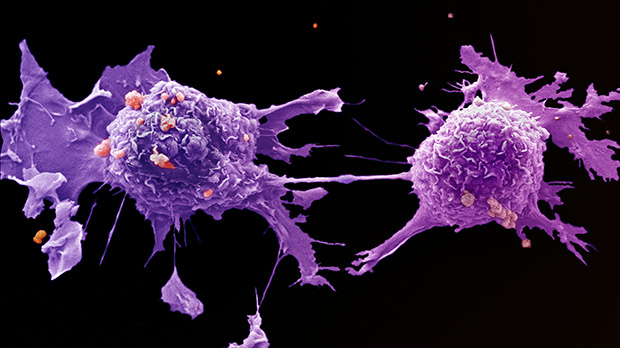 The short answer is it varies from tumour to tumour. But overall, it’s slower than you might expect.

According to Professor Trevor Graham, a Cancer Research UK-funded cancer evolution expert, the best evidence for the fact that most cancers grow slowly comes from screening. The screening programmes we have in the UK work “because there’s a long period of time when a tumour may have started to develop but it’s not become dangerous yet”, he says.

Take bowel screening for example. For every cancer that’s picked up during bowel cancer screening, 4 early tumours called adenomas are detected. Although most will never go on to become cancer, some will.

“It seems that tumour growth is started in lots of people, but it never quite makes it to the cancer stage,” says Graham. “That really points to growth often being slow.”

And this doesn’t just apply to bowel cancer. Similar trends are seen in breast cancer, where 1 in 4 breast cancers picked up during screening would never have caused any problems, which points to them being slow growing.

And even with cancers that often seem to be fast growing and aggressive, such as pancreatic cancer, Graham says this could just be down to the point at which they’re detected.

“We think that pancreatic cancers are often detected quite late, so they’ve been growing and evolving for a while. There might be a long and fairly slow development phase, but the first part is just invisible to us,” he says.

But like all good rules of thumb, there are exceptions. Graham works with people with inflammatory bowel disease, who have a higher risk of bowel cancer and are offered more regular bowel screening. This gives researchers a better idea of when tumours have begun to grow.

“Around 1 in 6 cancers develop in the 3 years between screens,” he says. “They won’t be there the first time we test, but they’ll develop before the second time. So they’ve developed relatively quickly.”

The question then becomes: what decides how quickly a tumour develops?

Turning back the clock

There’s a crucial set of ingredients needed for a cell to turn cancerous, which we’ve blogged about before.

A cell accumulates mistakes in its DNA, which cause a gene or a set of genes to go awry. And because cells have safety mechanisms that work to stop cells growing and dividing more than they should, multiple faults need to appear before a cell tips over the edge and becomes cancerous.

Cancer Research UK-funded scientists have found that kidney cancer generally fall into one of 3 categories, based on the amount, type and variety of genetic damage the cancer cells have. And this is linked to how the cancers behave.

Some kidney cancers don’t have much genetic damage, producing slow-growing tumours that are unlikely to spread. At the other end of the spectrum were the aggressive, fast-growing tumours, which typically have lots of genetic changes inside the cells that push them to grow quickly and spread early on in their development. Reading a cancer’s DNA can help us to understand when it started to develop.

By reading a cancer’s DNA, scientists can wind back the clock to its beginnings.

“Scientists can estimate how old cancers are using something called the ‘molecular clock’,” says Graham. “They can estimate how often random DNA faults occur and then compare that with how many faults are found in a particular tumour – and that can give them an estimate of how old the tumour is.”

Scientists have found that for most breast and bowel cancers, the tumours begin to grow around ten years before they’re detected. And for prostate cancer, tumours can be many decades old.

“They’ve estimated that one tumour was 40 years old. Sometimes the growth can be really slow,” says Graham.

So what can we do with this information?

“If we know how long a tumour takes to develop and when it’s likely to begin, then we know when to start looking in people for early signs of cancer. It could help us to design better screening programmes.”

This type of research could also help to personalise treatment. Using a cancer’s DNA code to predict how it might behave would give doctors an opportunity to tailor each person’s treatment. And also decide when treatment isn’t necessary.

We’re not there yet, but Graham’s team are working to make predictions like these a reality.

We want to make sure that everyone can find news that’s relevant and interesting to them on the Cancer Research UK website.

Very informative. Put some misnomers to rest. Are there any articles on secondary cancers?

Thanks for your question about secondary cancers. We now have a science surgery article answering the question ‘how do tumours ‘know’ where to spread?’, which you can read here: https://news.cancerresearchuk.org/2019/04/18/science-surgery-how-do-tumours-know-where-to-spread/. And if you would like a different question answered, you can always email us at [email protected] or comment below.