Science Surgery: ‘Why do never-smokers get lung cancer?’ 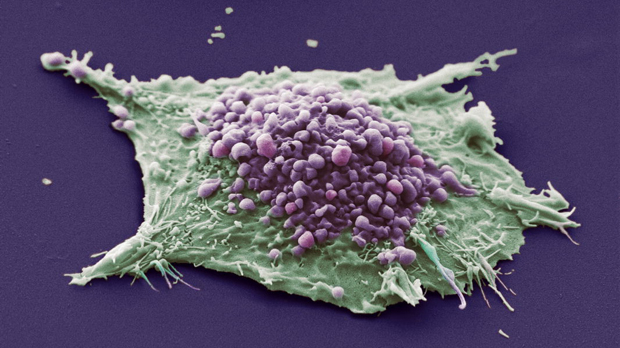 Janette asked: “Why do never-smokers get lung cancer?”

“It’s a question that often comes up in the clinic,” says Dr Mariam Jamal-Hanjani, an oncologist and clinical researcher specialising in lung cancer at University College London. “And it’s one that researchers have been asking for decades.”

The link between smoking and lung cancer has been known for almost 70 years. It’s the biggest cause of lung cancer in the UK, with around 7 in 10 lung cancers caused by smoking cigarettes. But there’s also a group of people who develop lung cancer and have never lit a cigarette.

“Around 10-15% of the lung cancer patients I see have never smoked,” says Jamal-Hanjani, who’s working on two Cancer Research UK-funded studies. “But we don’t always know why it is that these people get lung cancer.”

According to Jamal-Hanjani, the data suggests that genetics play a role, as well as environmental or occupational exposures.

When you compare lung cancers in smokers and never-smokers, differences start to emerge. The first of which is the types of lung cancer they develop.

They behave in different ways and respond to treatment differently. Around 9 in 10 lung cancers are non small cell lung cancer.

There are also differences when you look at the DNA inside the tumour cells.

Non-smokers who develop lung cancer are more likely to have cells with a fault in a gene called EGFR. This fault is commonly found in Asian women who had never smoked and developed lung cancer. But according to Jamal-Hanjani, it’s seen in other people too.

“If you’ve never smoked you’re more likely to have a lung cancer that’s driven by a fault in one or potentially more genes,” she says. “And these aren’t necessarily genetic faults that you’re born with, they’re faults that develop during someone’s lifetime.”

These DNA faults can offer up new options for treatment. For example, changes in the EGFR gene can be targeted by drugs like elortinib (Tarceva) and gefitinib (Iressa).

To understand what might increase someone’s risk of cancer, researchers study large groups of people for many years to look for links between exposure to something and lung cancer.

“These are really tough studies because they need to involve big numbers of people and long periods of follow up. And you need to clearly demonstrate that people who were exposed to something develop cancer, and that there are no other factors that could explain the association.”

To make it easier to exclude other risk factors, scientists will often run ‘case controlled’ studies.

Studies like this have shown that being exposed to second hand smoke, for example by living with someone who smokes, can increase a person’s risk of lung cancer by almost a third.

Researchers have also discovered that exposure to asbestos, radon gas or tiny particles that come from diesel exhausts and construction sites can increase someone’s risk of lung cancer. But the individual risks are small.

Overall, the risk of developing lung cancer if you’ve never smoked is far lower than if you have or still do. But Jamal-Hanjani says that this shouldn’t lead to a blind sense of security.

“I’ve had patients who had a persistent cough or who were coughing up blood, but believed that because they had never smoked they couldn’t possibly have lung cancer. And it’s not true. There’s still a chance they could develop lung cancer and it not have anything to do with cigarettes. So, people should always seek advice from their doctor if they notice any changes.”

I was diagnosed with adenocarcinoma in August 2016.I have never smoked or lived anywhere that the environment would trigger it .I was put on a clinical trial ,which was 4 cycles of strong chemotherapy followed by 18 months of maintenance chemotherapy. When the tumour began to change I had 10 fractions of radiotherapy which reduced it a little but at the next scan it had doubled in size. I had also been tested for the immunotherapy drug & was found to be 100% positive so that was my next treatment. I had 3 cycles after which the scan showed it had grown 1 cm in each direction.
I have just recently been able to have the tumour & surrounding lymph nodes removed.( the lymph nodes were found to be cancer free) I am now just having the last 2 cycles of Chemotherapy as a precaution but after the next scan hopefully I will be cancer free.
I was told at the beginning that without treatment I would have months left to live. I can’t quite believe that I have now got to the end. I cannot thank the Freeman Hospital in Newcastle enough for the exceptional care & treatment they have given me.

Good site. A lifetime non-smoker I was diagnosed with lung cancer and had half of my left lung removed. Later I was told by my oncologist that cancers can be identified and mine was a smokers cancer. Squamous cell. Survive it now over 30 years from diagnosis.

Excellent, thank you. As a retired doctor I find your web site excellent. Keep it coming I know it takes a lot of work to keep it up to date and informative.

Thanks for your questions. We’ve written about what can lead to a cell becoming cancerous for a previous science surgery (https://news.cancerresearchuk.org/2017/05/26/science-surgery-what-factors-lead-to-a-cell-becoming-cancerous/). Some viruses have been linked to causing damage that could lead to cancer, such as the human papillomavirus (HPV) and cervical cancer. And while we still don’t understand everything that could cause a cell to become cancerous, our scientists are looking at unique ‘fingerprints’ in a cell’s DNA to try and get a better picture (https://news.cancerresearchuk.org/2017/04/18/discovering-unknown-causes-of-cancer-through-fingerprints-in-dna/).

To answer your second question, scientists are working to develop treatments that can take immune cells from a patient and then alter them in the lab to make them better at killing cancer cells before returning them into the bloodstream. This innovative treatment is called CAR T cell therapy, we’ve written more about it here (https://news.cancerresearchuk.org/2018/10/05/cutting-edge-car-t-cell-immunotherapy-approved-in-england-but-is-the-nhs-ready/).

Excellent explanation to various questions about cancer research and treatment. I am cancer patient and also cancer research supporter with monthly standing order. May I ask 2 questions. First is. Could damage to our cells get created by nano-viruses? Second is. Can we extract immune cells from a cancer patient then multiply them in lab and inject back to the patient to kill the cancer cells? Many thanks and please add me to your list to receive your news. With kind regards Issidoros N. Lemanis(Mr)

I think this is a very informative site and has answered/clarified the many aspects of cancers questions.

My wife died from lung cancer 3.5 years ago, she was told it was not smoking related although she had smoked, but not for about 45 years. One thing she did do though was to use hair spray in our shower room which was quite small, I often wonder if this might have been a factor?

I would love to think that one day they would find away of knowing the real reason what
really is the cause of people having cancer even on animals having that dreadful disease which kills them & people.
You are wonderful people that are so caring what would we do without you my Husband & I try to do all the right things & eat the best of foods..
Yours
Sincerely
Mrs Patricia Summers.

Is there a link between cancer and alcohol. I’ve heard many cases of alcoholics never developing cancer ( personal friends included )….except scirrosis of the liver. Can alcohol kill cancer cellsand if so can alcohol be used to fight cancer.

I have never smoked & have developed EGFR lung cancer. The tumour was tiny & symptomless. The cancer was diagnosed after an emergency where they discovered secondary cancer in my spine. Radiotherapy, an operation & a magic little blue pill called afatanib has now put me in remission, but
living with cancer. I found this article good as it describes everything I have been told in an easy to understand format. Articles like this break the myth of smoking being the only cause of lung cancer and may save people’s lives, there needs to be more public awareness.

I have never smoked & have developed EGFR lung cancer. The tumour was tiny & symptomless. The cancer was diagnosed after an emergency where they discovered secondary cancer in my spine. Radiotherapy, an operation & a magic little blue pill called afatanib has now put me in remission, but
living with cancer. I found this article good as it describes everything I have been told in an easy to understand format. When I tell people, I always feel I have to tell them I have never smoked, because there is a presumption that I smoked. Articles like this break the myth of smoking being the only cause of lung cancer and may save people’s lives, there needs to be more public awareness.

My dad had a serious cough from February last year that continued to get worse and worse. They gave him an asthma pump to try for a month which did absolutely nothing. They discovered he had fluid on his lung and a shadow on the lung in May however he still wasn’t diagnosed with lung cancer until July. During this time, they did various blood tests and scans. I just still can’t work how it took so long to diagnose him. Even at the end of this article the one of the symptoms which is highlighted is a persistent cough!

Because I smoke next to them

Non–small cell lung cancer (NSCLC), which accounts for around 85% of lung cancer cases, has historically been considered a nonimmunogenic disease; however, recent data show that much of this lack of immune responsiveness is functional rather than structural (ie, possible to overcome therapeutically).

This will allow immunotherapeutic strategies to shift the balance of immune activity away from a tumor-induced immune-suppressive state toward an active antitumor immune response.

Immune responses develop quickly, and are mediated by various effector cells NK cells, polymorphonuclear leukocytes, and mast cells, as well as antigen-presenting cells [APCs] such as macrophages and dendritic cells [DCs]), which lead to the secretion of interferon gamma (IFN-γ) and perforin, as well as cytokines, that induce apoptosis of tumor cells.

Thus, the most effective is not only lifestyle (quitting smoking), but preventive targeting immunotherapy.
1. Aimed at reducing the overexpression of pro-inflammatory cytokines
2. Activation of the cytotoxic potential of lymphocytes
3. Formation of antigen-presenting cells
4. Unlocking “Immune Checkpoints”

I would also like to know why most smokers don’t get lung cancer? It would be interesting to know if they have some gene that protects them that could help others. Unfortunately most doctors are so convinced smoking causes lung cancer that few are looking at anything else.

When I was 3 I got diagnosed with stage 4 lung cancer. My parents never smoked nor did any other family members. At the time there wasn’t much research on the type of cancer I had, however they believed that I was born with a faulty gene which developed into my tumour. I and now 19 and 16 years clear of cancer!!

My father had never smoked nor drank alcohol and was never surrounded by smokers. He developed a persistent cough and so eventually had a scan. He had stage 4 sarcomatoid lung cancer. He lived 1 month and passed away. There’s just not enough people to study for research to progress which is a shame.