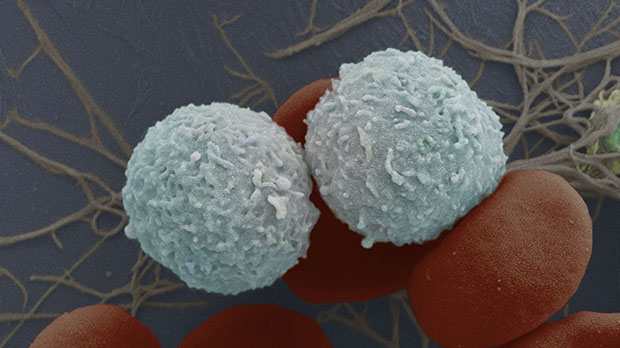 Millie asked us on Instagram: “Why doesn’t the immune system attack cancer cells?”

“It’s recognising and destroying little cancers as they develop all the time. If we didn’t have an immune system, then we would be developing cancer a lot more often.”

This is because the process of cell division isn’t perfect. The rate at which some cells grow and divide means errors can happen and cells become damaged.

In most cases, our immune system acts as quality control, making sure these cellular mistakes are nipped in the bud before they become too sinister. A group of immune cells, called killer T cells, are the ones mostly responsible for patrolling our bodies and destroying damaged cells or small tumours before they cause us harm.

So, if our immune system is so good, why do we still develop cancers that need treatment?

In the very early stages of cancer our immune cells do a good job of killing individual cancer cells as they arise. This is known as the ‘eliminating phase’, where immune cells are in control of the tumour and calmly carry out their work.

“However, if the rate of tumour growth begins to match the activity of our immune system then we enter a stage of equilibrium,” says Elliott.

Here, the immune cells are doing a good enough job at staying on top of cancer cells as they grow and divide, even though their workload is increasing.

“Some tumours can actually get fairly big but still be kept in check by our immune cells,” says Elliott. “This behaviour can sometimes last for several years.”

But as time goes on, cancer cells can develop genetic changes that help them escape the immune system. This is what has been called the ‘escape phase’.

“Unfortunately, once cancer cells really start to change and grow, they come up with ingenious ways of bypassing our immune cells and escaping their detection.”

Immune cells recognise danger through a group of molecules found on the surface of all cells in the body. This helps them inspect potential problems closely and decide whether to attack.

But when a cancer reaches the ‘escape phase’ it can change. The molecules that would otherwise reveal the cancer to the immune system are lost, and killer T cells move past, unaware of the danger the cancer cell could cause.

“That’s a sure-fire way of escaping detection,” says Elliott, adding that it’s one of many escape methods cancer cells use.

“Cancer cells also develop ways to inactivate immune cells by producing molecules that make them stop working.” They also change their local environment, so it becomes a hostile place for immune cells to work.

“Once the tumours have changed their environment, any circulating killer T cells that arrive in this space are rendered inactive,” says Elliott.

Research has shown that changes to immune cells don’t need to be permanent. The theory is that if there’s a way to reverse these tricks, or stop immune cells falling for them, their cancer-fighting ability could be restored.

This has formed the basis of a growing range of cancer treatments called immunotherapies. And for some cancers, these drugs offer the chance of a cure that would’ve been impossible a decade ago.

They can work by releasing the brakes on immune cells so they can get cancer cells back in line. And a group of these drugs, called checkpoint inhibitors, are now being routinely used to treat a range of cancers, including some melanomas, lung and kidney cancers.

But these drugs don’t work for everyone. And scientists still need to understand more about how cancer cells get the better of immune cells. Pinpointing how cancer cells move from the ‘eliminating phase’ towards ‘escape’ could uncover new ways to stop this from happening.

So we should be reassured by the immune system’s ability to keep damaged, rogue cells at bay.

And when this ability dwindles, research is leading to immunotherapies that can reenergise our immune cells and get cancer back under control.

This site is very helpful and.informative

Thanks to everyone who has submitted a science surgery question, we really appreciate your interest. We can’t answer every question we receive, but make sure you follow the series on our blog to keep an eye out for those we do. We can’t give medical advice on individual cases, but If you would like to speak to one of our nurses please call them on freephone 0808 800 4040.

Very thorough explanation to the above question. I rarely get a cold so thought my immune system would be able to deal with anything, unfortunately not this. Is there any way of testing the capabilities of one’s immune system?

You do not mention once about nutrition and how to maintain a healthy immune system through diet, why is that? Eating plant based foods are proven to do this, so surely you should be promoting better eating habits.

Interesting article. Thankyou. I have had two types of cancer. and wonder why when I keep weight down, exercise and eat properly.

Do Cyst always develop into a tumour?

Your answer to the question “Why doesn’t the immune system attack cancer cells?” was very comprehensive and gave some useful links to more, in depth, information on the subject. Having been involved in cancer research myself, I am most impressed by your website.