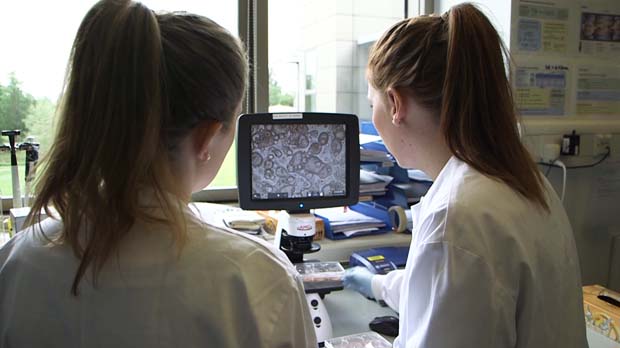 But cellular history might not always be quite what scientists expect – especially when working with cancer cells that have been growing for decades, not in a patient, but in a flat 2D layer in a plastic dish.

Nestled among the rolling green hills just south of Cambridge, scientists at the Wellcome Trust Sanger Institute are challenging more than 50 years of cell growing convention.

“It’s really exciting,” the Sanger’s Dr Mathew Garnett tells us as he points to microscopic balls of cancer cells displayed on a screen in his lab.

Garnett’s team is adopting a brand new way to nurture and study cells in the lab – 3D structures called organoids.

And as part of a global research collaboration with Cancer Research UK, the US National Cancer Institute, and Hubrecht Organoid Technology – a Netherlands-based non-profit – the Sanger team is developing thousands of these organoids to help track genetic changes in cancer, and develop new drugs to target them.

“Cancer cells are a really important tool in the laboratory, and traditionally we grow them on a two-dimensional plastic plate,” Garnett explains. “The problem with this is it’s a very artificial state. We know that cells within the body actually grow as three-dimensional, complex structures.” 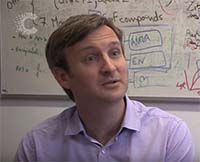 A real concern with those cells is that, over that period of time being grown in this artificial condition, they no longer reflect the features of the cancer – Dr Mathew Garnett

Forcing cancer cells to grow in these artificial conditions can actually change the cells’ biology. It also favours the most aggressive cancer cells, as these hardy descendants of a patient’s tumour can handle their tough, plastic home.

All of these issues, Garnett explains, mean that some lab-grown cells may no longer represent the decades-old tumours from which they came. And simply working with the most aggressive cells could mean the effects of experimental drugs in a lab might not carry through into patients.

“A real concern with those cells is that, over that period of time being grown in this artificial condition, they no longer reflect the features of the cancer,” says Garnett. “That’s a major drawback of the current set of cell models.”

On top of this, researchers have also struggled to grow cells for certain cancers in the lab. And this has slowed progress for some harder-to-treat tumours.

That’s why the team, along with their international collaborators, are investing in organoids.

It all starts with a patient, says Garnett.

Working in collaboration with a number of clinical sites across the UK, the team extract cells from patient samples collected either during surgery or from biopsies. “We break the samples apart and put them into specialised conditions,” he says. This includes feeding the cells, and offering a 3D support structure in which they grow. This more favourable environment means the team can develop organoids from many different types of cancer, and from all stages of the disease.

This allows the team to start building a complete catalogue of organoids for each type of cancer. And they’ll be kicking off with a pilot project for bowel, pancreatic and oesophageal cancers.

“We often think of cancer not as one disease but of many different diseases,” Garnett tells us. “Even within a tissue, for example breast or lung cancer, they can actually be subdivided into many different groups. Each of those subgroups is different, and patients can often respond differently to treatment.”

The problem is that many of these subgroups are missing from the catalogues of cells available to scientists working in the lab. This is particularly true for oesophageal cancers, where scientists have struggled to develop cell models to study the disease.

Garnett’s goal is to make organoid models from all those different subgroups. He believes this will help scientists better understand cancer in all its guises, and why tumours might respond differently when doctors treat them in the clinic.

They can also make organoids from healthy cells too, allowing them to compare these to the tumour cells.

And as the video below shows, the team are already using organoids to test hundreds of drugs in the lab.

Garnett and his team are meticulously documenting the genetics of the cells, and are adamant that the shortfall of traditional cell lines won’t be repeated with organoids.

For now, the team is trying to work out how best to use organoids in their research, says Dr Hayley Francies, a senior member of Garnett’s team.

That means answering some fundamental questions about how closely the organoids match the tumours they came from. “When we start generating large banks of these models to represent a given cancer type,” says Francies, “we need to ask: are we really capturing the diversity of that disease?”

The early signs suggest that the organoids do closely mirror tumours. Based on their early studies of bowel cancer, the team found that 80% of the gene faults found in the original tumour samples could also be found in the organoids grown from those samples. This, they say, is far better than the 2D cell lines of old.

And the team is confident that combining genetic information with a more realistic way of growing the cells should make it easier to test (or ‘screen’) more potential drugs.

“We’re doing lots of drug screens,” says Francies, “so we can try and look for new drugs to treat cancers that are, at the moment, quite difficult to treat, including pancreatic and oesophageal cancers.”

On top of this, the organoids that they develop will be made available to researchers around the world. And they’ll come with a complete history of the cells’ origins, ranging from the type of cancer and how advanced it was, to the catalogue of genetic faults in the cells’ DNA, and how the patient’s tumour responded to treatment.

Garnett likens this to a kind of cellular ‘passport’ that will help speed up research.

They don’t look like a full colon or pancreas, but at the microscopic level, at the cellular level, they are much more reflective of the biology of the tissue from which they came

“What we’ll be able to do is share the organoids with researchers around the world,” he says. “They’ll understand where they came from, what type of cancer they are. We’ll have done things like DNA sequencing to look for changes in the DNA of those cells. And we will have also done drug screens to try and understand which drugs those cells are sensitive to.

“So when we share those with people, they’ll have this passport to support further research.”

Of course, no lab-based cell line is perfect. “They are still microscopic little cellular balls,” says Garnett. “They don’t look like a full colon or pancreas, but at the microscopic level, at the cellular level, they are much more reflective of the biology of the tissue from which they came.”

And this could be key for his team, and others around the world, as they look to help personalise treatment by matching drugs to a tumour’s genetic fingerprint.

“In the future when we see a patient with the same genetic changes in their DNA,” says Garnett, “we’ll know which drugs will work and which ones won’t.”