Building tumours in the lab – a how to guide 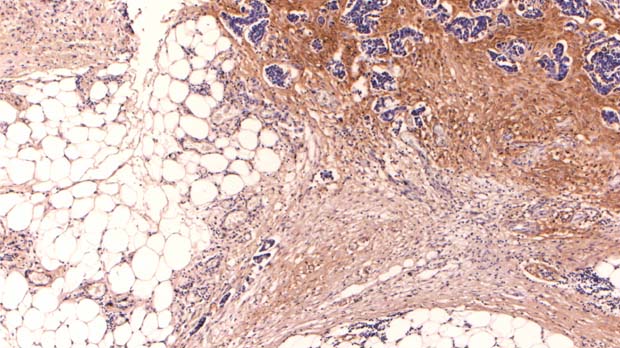 The ability to grow cancer cells on plastic has transformed cancer research.

And since the technique took off more than 60 years ago, scientists have routinely turned to plastic dishes and flasks as homes for their lab-grown cells.

The story is infamously tied to that of Henrietta Lacks – who, unknowingly, became the first person to have cells from her tumour live on in the lab.

But the technical knowhow for growing cells in this way forms the foundations for much of our understanding of cancer biology. As a cancer develops, grows, and spreads, it needs a whole host of other cells in the body to help it do so – Professor Fran Balkwill

There’s a catch though: the human body isn’t plastic.

And as the complexities of cancer continue to reveal themselves, many researchers feel it’s time for an upgrade to how they grow cells in the lab.

This in part comes from a growing understanding that tumours are made up of more than just cancer cells.

“As a cancer develops, grows, and spreads, it needs a whole host of other cells in the body to help it do so,” explains Professor Fran Balkwill, whose Cancer Research UK-funded team at Barts Cancer Institute in London studies this complex ecosystem of cells and molecules.

Collectively, the cancer cells and healthy cells that have been “recruited and corrupted”, are known as the tumour microenvironment, says Balkwill. But the cellular surrogates that many researchers use to study tumours in the lab fall short in capturing this complexity.

So it’s here that the team’s ambitious CANBUILD project – funded by the European Research Council and Cancer Research UK – is stepping in.

Their goal is to build artificial tumours in the lab. And in doing so, they hope to have a more precise way of testing new treatments.

We first wrote about the project when it launched three years ago. And the team will be showcasing their progress at this year’s Royal Society Summer Exhibition in London from 4-10 July.

The initial phase of research has focused on taking tumours apart and studying each component individually. This, says Balkwill, is crucial for setting the rules around how to build tumours in the lab.

“We need a reference manual,” she tells us. “If you take apart a watch or a plane or a car, it doesn’t necessarily tell you how to put it back together again, but at least it gives you all the working parts.” For tumours, she says, “we really didn’t know that in enough detail”.

The team has spent a lot of time on this ‘deconstruction phase’ of the project.

“We’ve learned a lot more than we thought we would,” says Balkwill. “It’s giving us insights into the way the tumour microenvironment is controlled in patients, especially women with ovarian cancer.”

Crucially, says Balkwill, deconstructing tumours in this way has also given them the ‘master plan’ they need to start building artificial tumours in the lab. And the video below shows some of the progress they’re making.

With their plan in hand, the team is starting to put the pieces of an artificial tumour in place. And for now, they are focusing on ovarian cancer.

“This is a disease that’s often detected quite late when it’s spread throughout the body,” Balkwill says.

To understand more, the team is studying a fatty tissue that’s a common home for spreading ovarian cancer cells.

It’s called the omentum, and usually attaches to the gut. But Balkwill’s team is now reconstructing it in the lab to study how ovarian cancers spread.

So far the team has developed the artificial omentum tissue. And this has been growing in 3D in the lab for several weeks, alongside some of the other types of cells that support the tissue. Fat cells growing in the lab will form the foundation of one of the team’s models. Credit: CANBUILD team

Balkwill and her team have lofty goals for the project. And they believe that their approach can be adapted for other types of cancer too.

They hope that ultimately, their work will offer scientists a more precise model of tumours in the lab. This, says Balkwill, will be vital in testing the latest treatments.

I believe these models are going to allow us to understand much more about how a tumour starts in the first place, how a cancer begins. We really don’t know those very first stages

“We now know from research all around the world that there are immune cells in the body of a cancer patient that are capable of recognising and destroying the cancer in some cases,” she says. “But most of the time they’re disabled, they’re exhausted, they’re suppressed.

“So a lot of exciting new treatments try and wake up immune cells.”

In the future, Balkwill hopes that her team’s artificial tumours will provide a place to test the latest immunotherapies. But there’s still some way to go.

“Every model is a model,” she says. “They all have their limitations, so we must always be careful of that.” And Balkwill’s team is among many others around the world trying to develop these new models.

But her team is confident that its approach can complement ongoing work with animals and advanced computer models of the tumour microenvironment.

Being able to piece a tumour together from many different parts could also give a clearer view of how cancers start. This is Balkwill’s dream.

“I believe these models are going to allow us to understand much more about how a tumour starts in the first place, how a cancer begins. We really don’t know those very first stages.

“What are the absolute necessary cells? It’s just not the cancer cells themselves. They need other cells to help them start and then grow and then spread.

“The dream model will allow us to do that.”

And it simply can’t be done with just a layer of cancer cells grown on plastic.

This starts at the right place for interview